Susie Goodall was briefly knocked unconscious when mountainous seas upended her yacht DHL Starlight early Thursday, tearing off its mast and trashing much of her equipment. 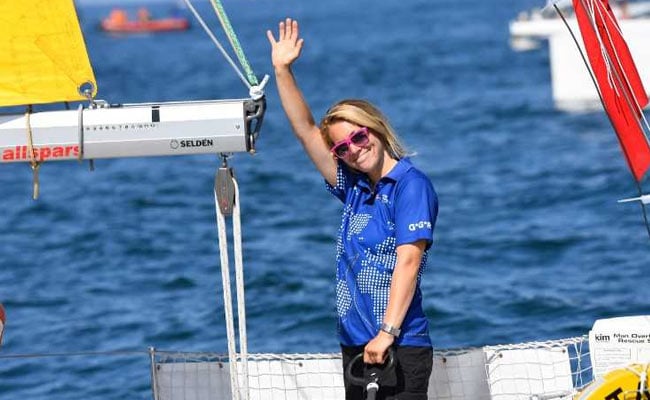 A Chinese cargo ship has reached a British solo around-the-world sailor whose yacht was crippled in a ferocious storm as she crossed the Pacific, race organisers said Friday.

Susie Goodall was briefly knocked unconscious when mountainous seas upended her yacht DHL Starlight early Thursday, tearing off its mast and trashing much of her equipment.

The master of the Hong Kong-flagged Tian Fu was hoping to use a crane winch to pick her up.

Goodall had managed to get her engine running but it failed after just 20 minutes, which is likely to complicate the rescue effort.

"Without the engine DHL Starlight must drift at about 1 knot with the sea anchor and the master of the ship will need to maneuver the 40,000 tonne ship to meet Susie!," race organisers tweeted.

Goodall was attempting to navigate the southern Pacific's notorious Roaring Forties at the time as part of the Golden Globe Race.

The 29-year-old, the youngest competitor in the race and the only woman, sent frantic text messages to race organisers throughout her ordeal.

"Taking a hammering! Wondering what on Earth I'm doing out here," she texted as the storm hit.

When concerned organisers finally managed to contact her by satellite phone several hours later, she confirmed her boat had been dismasted but said the hull had not been breached.

"The boat is destroyed. I can't make up a jury rig," she said. "The only thing left is the hull and deck which remain intact.

"We were pitchpoled (rolled end over end) and I was thrown across the cabin and knocked out for a while."

While "beaten up and badly bruised" she was safe and had managed to bring flooding under control and get her engine going, giving her some manoeuvrability when the rescue ship arrives, race organisers said.

In text updates, Goodall said she endured "a looong night".

"In need of a good cuppa tea! But sadly no cooker," she messaged.

Entrants set off from France on July 1 and are expected to finish in April next year.

(This story has not been edited by NDTV staff and is auto-generated from a syndicated feed.)
Comments
Chinese cargo shipBritish Solo YachtswomanPacific Ocean