India's candidate, NITI Aayog member Ramesh Chand, would have faced a certain defeat, had he persisted in the race because of Beijing's influence. 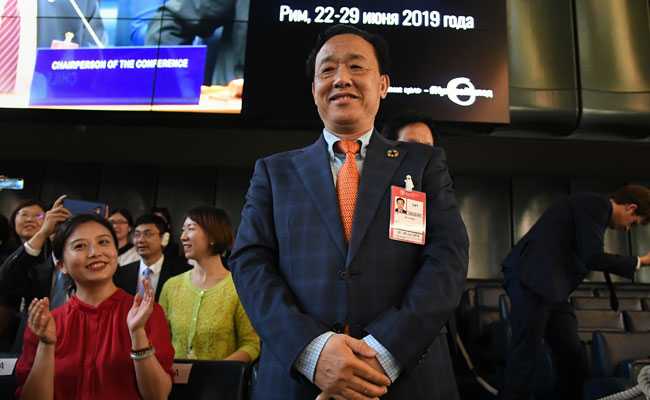 China's Qu Dongyu has been elected the Director-General of the Food and Agriculture Organisation (FAO) - a race from which India withdrew its candidate earlier this month.

Qu won the election held in Rome during the 41st session of the FAO Conference on Sunday by polling 108 votes. He defeated France's Catherine Geslain-Laneelle, who got 71 votes, and Georgia's Davit Kirvalidze, who received only 12.

Another, Meng Hongwei was elected Interpol's president, but quit under mysterious circumstances.

China with its renminbi diplomacy of investing in development projects around the world, especially in developing countries, was able to out manoeuvre France and also the US, which backed Georgia's candidate.

India's candidate, NITI Aayog member Ramesh Chand, would have faced stiff competition from China, and almost a certain defeat, had he persisted in the race because of Beijing's influence among developing countries fuelled by its largesse.

New Delhi is not able to match China's investments in development projects and its aid programmes because India's economy is much smaller and not concentrated in government hands.

China is now the third largest contributor to the FAO, with an assessed contribution of $21 million for this year. In contrast, India contributed only $2 million, less than even other developing countries like Turkey, Argentina and Mexico.

After Qu's election, India's Permanent Representative to the FAO, Reenat Sandhu, graciously congratulated him and said, "We look forward to working with the new Director-General Qu Dongyu in achieving our common objectives of addressing the challenges of hunger and malnutrition."

"We hope that under your leadership, these challenges can be overcome through collective and integrated actions."

Mr Chand was nominated for the post in March. But this month the FAO said, "On 13 June 2019, the Secretary-General of the Conference and Council received a communication from the Government of India informing of the withdrawal of the nomination of Ramesh Chand".

On August 1, Qu will become the ninth FAO head when he succeeds Jose Graziano da Silva of Brazil, who was first elected in 2011 and served two terms.

Washington-backed Georgia's Kirvalidze, whose poor tally, not even reaching the teens, reflected US' isolation in world forums.

Before the election, Italian Insider, a Rome-based publication that follows FAO affairs, said that according to US diplomatic sources Washington may consider cutting funds to the organisation if China's candidate was elected.

Washington is the biggest contributor to the FAO, with an assessed contribution of $63 million this year or 22 per cent of the total.

The US and other countries are wary of a Chinese national heading an international organisation like the FAO and Beijing's likely hold on him.

The reservations were reinforced by the experience at Interpol.

Mr Meng suddenly disappeared from its headquarters in Lyons, France, last year and his wife reported him missing to French authorities.

He resurfaced in China, where he was arrested and charged with corruption. He resigned from the Interpol while in custody.

In his acceptance speech, Qu tried to reassure FAO member nations about his independence, saying that he would be "impartial and neutral".

(Except for the headline, this story has not been edited by NDTV staff and is published from a syndicated feed.)
Comments
Qu DongyuRamesh ChandFood and Agriculture Organisation