The socialist neighbours both maintain sweeping claims to sovereignty in much of the contested waterway, parts of which are also claimed by Taiwan, the Philippines, Malaysia and Brunei. 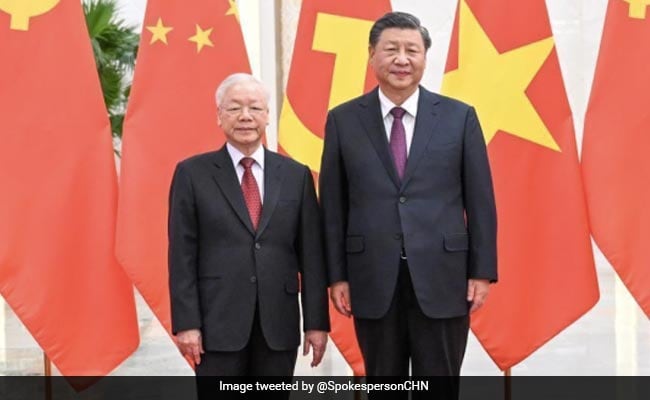 China and Vietnam agreed on Tuesday to "properly manage" territorial disputes in the South China Sea, rounding off a leaders' meeting in Beijing as part of a diplomatic blitz by Chinese President Xi Jinping.

The socialist neighbours both maintain sweeping claims to sovereignty in much of the contested waterway, parts of which are also claimed by Taiwan, the Philippines, Malaysia and Brunei.

Trillions of dollars in ship-borne trade passes through the South China Sea each year, and naval vessels from the United States and other Western nations regularly sail through it, though Beijing has ignored an international court ruling that its claims have no legal basis.

Xi and other Chinese leaders met with Vietnam's Communist Party General Secretary Nguyen Phu Trong in Beijing, holding "an in-depth and candid exchange of views on maritime issues", according to a readout on Tuesday from Chinese state news agency Xinhua.

Beijing and Hanoi "agreed to properly handle maritime issues and contribute to long-term peace and stability in the region", the readout said.

They concurred that "it is crucial to properly manage differences to protect peace and stability in the South China Sea", and vowed to "actively negotiate transitional and temporary solutions that do not impact their respective positions".

They also agreed to work together to counter terrorism, crack down on transnational fraud and rein in the illegal drugs trade, the report added.

Xi is welcoming a series of world leaders to Beijing this week in his first diplomatic meetings since breaking longstanding precedent last month to seal a third consecutive term as China's leader.

His schedule includes an ongoing visit from Pakistan Prime Minister Shehbaz Sharif and one from German Chancellor Olaf Scholz on Friday, in what will be the first formal state visit to China by a European leader since the start of the Covid-19 pandemic.