China to provide Pakistan 50 Thunder jets, talks for stealth on 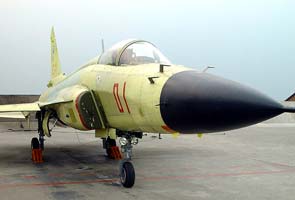 Beijing: China has agreed to immediately provide Pakistan 50 new JF-17 Thunder multi-role jets under a co-production agreement even as talks are on for more fighter aircraft including those with stealth technology.

China will immediately provide 50 JF-17 Thunder aircraft to Pakistan, an unnamed official was quoted as saying by the Dawn daily.

"We will get these planes in weeks," he said, adding that a formal agreement to that effect was likely to be signed today.

The official said Pakistan and China were already jointly producing the JF-17 aircraft, but these 50 planes would be equipped with more sophisticated avionics.

He said the war planes to be fully funded by China would help bolster Pakistan's defence and add to tactical capability of its air force.

The News daily reported that it is likely that these planes will be supplied by June next year.

It added that the two countries are also discussing the supply of Chinese J-20 stealth jets and Xiaolong/FC-1 multi-purpose light fighter aircraft to Pakistan.

They are discussing the mode of payment and the number of planes to be provided to Pakistan, the report said. With the supply of the new fighters, Pakistan Air Force will now have a total of 260 Chinese jets, making them the mainstay of the force.

Meanwhile, in a sign of greater cooperation between the two countries, China will also launch a satellite for Pakistan on August 14.

Promoted
Listen to the latest songs, only on JioSaavn.com
The satellite will supply "multifarious data" to Pakistan, the report said.

Prime Minister Yousuf Raza Gilani, who was on a visit to China, said both sides had agreed to increase defence cooperation and China had assured Pakistan of help in enhancing the capacity of its armed forces.