China is pushing to catch up with the United States and become a space power, with ambitions of a manned lunar landing. 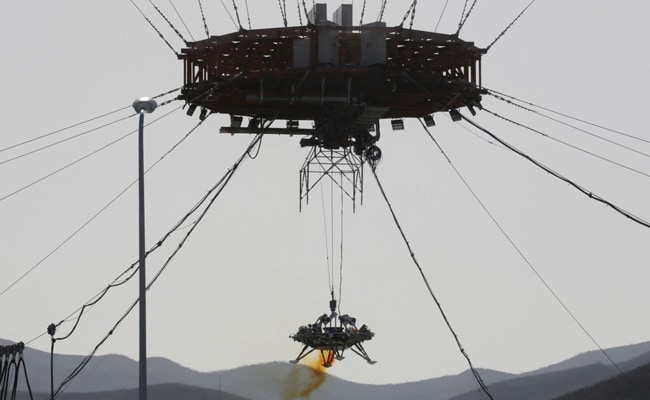 China on Thursday completed a test of its Mars exploration lander ahead of Beijing's first mission to the red planet slated for 2020.

Beijing is pouring billions into its military-run space programme, with hopes of having a crewed space station by 2022.

Thursday's hovering and obstacle avoidance test, which took place in Huailai, northern Hebei province, was conducted in a facility that simulated conditions on Mars.

A red platform with steel cables attached mimicked the planet's gravity- which is about a third that of Earth- as the lander descended from a tall, metal structure.

The test is "an important part" of China's plans to land on Mars, said Zhang Kejian, director of the China National Space Administration (CNSA).

"Currently, all development work is going smoothly," he said in a statement.

China is pushing to catch up with the United States and become a space power, with ambitions of a manned lunar landing.

Earlier this year it made the first ever soft landing on the far side of the moon, deploying a rover on the surface.

China's first mission to Mars will focus on "orbiting and landing on Mars and perform a patrol survey on the surface," Zhang Rongqiao, chief designer of China's Mars mission, said at Thursday's test.

"After the probe is launched, it will take seven months to reach Mars," he added.

The final landing process will only last about seven minutes, but is "the most difficult and the most challenging part of the whole mission".

China now spends more on its civil and military space programmes than Russia and Japan, and is second only to the United States.

Although opaque, its 2017 budget was estimated at $8.4 billion by the Organization for Economic Cooperation and Development.

(This story has not been edited by NDTV staff and is auto-generated from a syndicated feed.)
Comments
Mars Lander TestChinaMars exploration