The government announced a four-step plan in February for the gradual easing of social restrictions, with the next phase due to come into force next week. 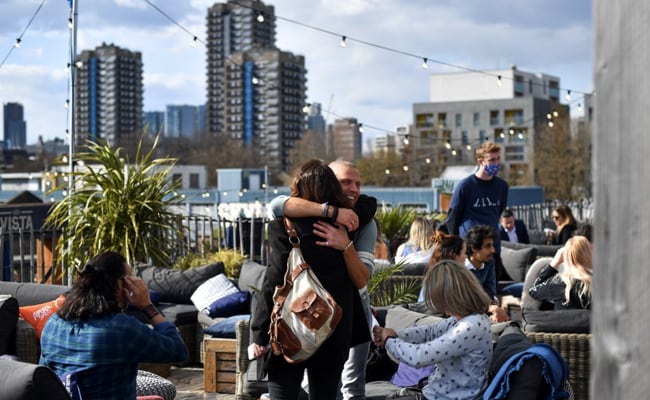 Pubs, cafes and restaurants will be able to host customers indoors for the first time in months.

British Prime Minister Boris Johnson on Monday gave the green light to cautious hugging and the serving of pints inside pubs after months of strict restrictions as he set out the next phase of covronavirus lockdown easing in England.

The government announced a four-step plan in February for the gradual easing of social restrictions, with the next phase due to come into force next week.

Johnson said that the government would allow families and close friends to make their own choices on social contact, but urged people not to throw caution to the winds, and said social distancing must in workplaces, shops and restaurants.

"This unlocking amounts to a very considerable step on the road back to normality and I am confident that we will be able to go further," Johnson told a media conference.

"We are announcing the single biggest step on our roadmap, and it will allow us to do many of the things that we've yearned to do for a long time"

Under Step 3, from May 17 people will be permitted to meet up indoors for the first time in months, in groups of up to six people or two full households together.

Pubs, cafes and restaurants will be able to host customers indoors, also for the first time in months and subject to certain rules. Other indoor entertainment like cinemas and sports venues will also be able to resume activity.

The reopening will apply to England only, with the semi-autonomous governments of Scotland, Northern Ireland and Wales setting out their own rules.

According to Johns Hopkins data, Britain has the fifth highest death count in the world from COVID-19 with 127,609 fatalities. Two-thirds of adults in the United Kingdom have had a first vaccine and one-third have had both doses.

On Monday, the country's chief medical officers also lowered the COVID-19 alert level, meaning that an epidemic is in general circulation but transmission is no longer high or rising exponentially.

In a statement, the medical officers said social distancing and the rapid vaccine rollout had helped to bring coronavirus cases and daily deaths down sharply.

"However COVID is still circulating with people catching and spreading the virus every day, so we all need to continue to be vigilant," they said. "This remains a major pandemic globally."