Caught On Camera: Bear In US Easily Opens Car Door, Climbs Inside

The video shows the animal entering the vehicle, most likely in search of food. It was captured by a CCTV camera installedin the area. 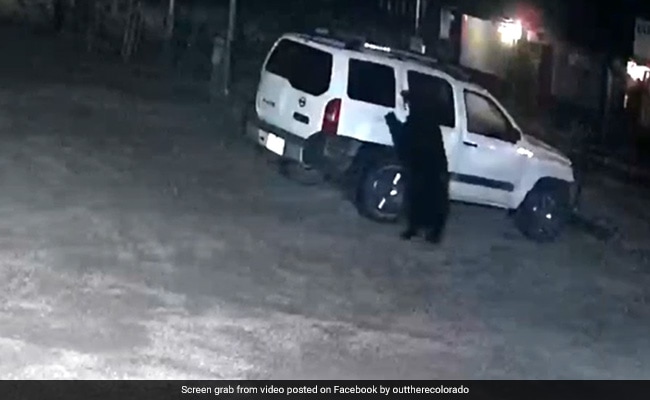 A man in Colorado, in the United States, has shared a video on Facebook of a bear effortlessly opening the door of an unlocked SUV and climbing inside. The ease with which the furry animal unlocked the vehicle has surprised social media users. The video shared by Dylan Faflick was captured by a CCTV camera installed in the area.

The video has been captioned, "This video of a bear opening an unlocked vehicle in Allenspark shows how easily this can happen. Bears are smart animals and have no problem with most door handles, making it crucial to keep doors and windows locked in bear country. In this case, the bear did no damage to the vehicle upon realising no food was inside."

The clip begins with the bear approaching the parked car slowly. It soon stands up on its hind legs and opens the car door with its paws. The video then shows the animal entering the vehicle, most likely in search of food. It finally climbs into the vehicle.

Colorado is famous for its mountain ranges, forests, and rivers. This mountain state, however, has one of the largest populations of black bears.

While bears are not naturally aggressive, they are large and powerful animals, and it is crucial to take necessary precautions to avoid conflicts with them.

Bears have a variety of furs, ranging from light brown to completely black. Black bears can be found throughout Colorado's Rocky Mountains at mid to lower altitudes.

A few months ago, a black bear was caught breaking into a car in Connecticut and completely destroying it.

A man got the surprise of his life after he noticed his mother-in-law's car lights switched on while she was in bed. When he went outside to check, he discovered the intruder wasn't any average prowler but a hungry black bear trapped in the cabin, looking for food.

He then called the Connecticut Department of Energy and Environmental Protection, or DEEP, who then got the bear to flee by opening the car door.

6 Killed In Shooting At US Walmart Store, Gunman Dead Too