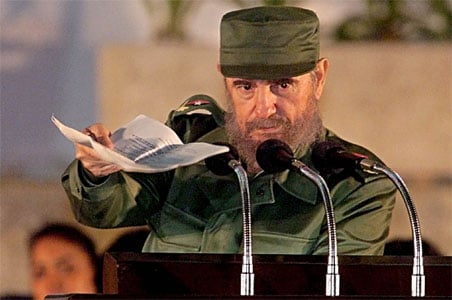 Fidel Castro blasted US President Barack Obama on Friday in provocative May Day remarks, saying the United States only wanted Cuba to return "to the fold, like slaves."

Castro, 82, who led Cuba for almost 50 years and remains head of the Cuban Communist Party, was not in outreach mode, though Obama and Cuban President Raul Castro, 77, have made remarks aimed at easing Cold War-era tensions.

"Today, they stand ready to forgive us -- as if we would resign ourselves to returning to the fold like slaves, who after tasting freedom, go back to the yoke and whip," Fidel Castro said in a defiant address published in Cuban state media to mark May Day.

Obama has said the United States wants to see progress on human rights and political freedom from Cuba. That runs counter to Cuba's main interest in maintaining and projecting the Americas' only communist regime into the future.

But Castro, who for decades referred to the United States as the enemy, said, "The (US) adversary must never delude itself into thinking that Cuba will surrender."