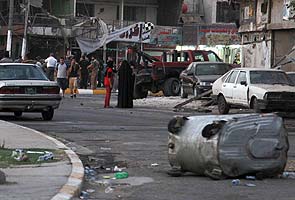 People inspect the site of a car bomb attack at the Karrada neighborhood of Baghdad, Iraq

It was not immediately clear who had carried out the attacks, which appeared coordinated, but Sunni Islamist militants, including an al Qaeda affiliate, have been striking with a ferocity not seen in years.

In the Hussainiya district on the northern outskirts of the capital, two car bombs exploded in quick succession, killing ten.

"I saw a fireball and a huge cloud of smoke. We couldn't approach immediately fearing a second bomb, but we could hear the screams of people asking for help," said Ali Jameel, a policeman in a patrol stationed in Hussainiya.

"A minute later a second blast happened nearby. Bodies were lying on the ground and some of the wounded were crawling to distance themselves from the blaze, leaving a trail of blood behind them".

About 800 Iraqis were killed in August, according to the United Nations, with more than a third of the deadly attacks happening in Baghdad.

The bloodshed, 18 months after US troops withdrew from Iraq, has stirred concerns about a return to the sectarian slaughter of 2006-07, when the monthly death toll sometimes topped 3,000.

Promoted
Listen to the latest songs, only on JioSaavn.com
Earlier on Tuesday, gunmen stormed the house of a Sunni, pro-government militia member in southern Baghdad and beheaded him, along with his wife and three children, police and medics said.

Separately, four unidentified bodies were found in different places in Baghdad. All of the victims had been handcuffed, blindfolded and killed.
© Thomson Reuters 2013