Saudi Arabia has been pursuing a nuclear power plant deal with the United States that would potentially include allowing it to produce nuclear fuel. 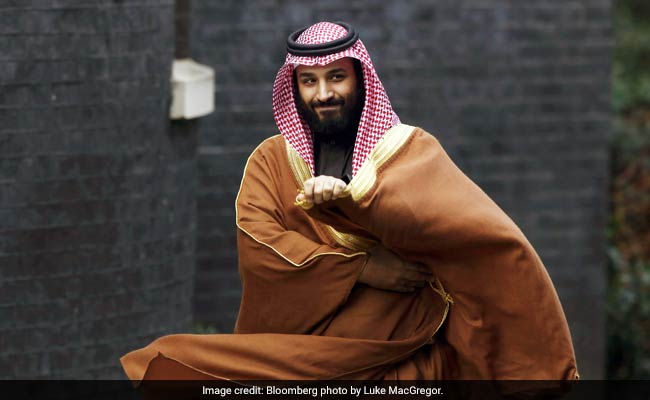 Saudi has turned to China in the past when met with refusals from the US for certain weapons requests.

Satellite images suggest that Saudi Arabia has constructed its first known ballistic missile factory, according to weapons experts and image analysts, a development that raises questions about the kingdom's increasing military and nuclear ambitions under its 33-year-old crown prince.

If operational, the suspected factory near the missile base in al-Watah, southwest of Riyadh, would allow Saudi Arabia to manufacture its own ballistic missiles, fueling fears of an arms race against its regional rival Iran.

Saudi Arabia does not possess nuclear weapons, so any missiles produced at the apparent factory are likely to be conventionally armed. But a missile-making facility would be a critical component of any eventual Saudi nuclear weapons program, hypothetically giving the kingdom capability to produce the preferred delivery systems for nuclear warheads.

"The possibility that Saudi Arabia is going to build longer-range missiles and seek nuclear weapons - we imagine that they can't. But we are maybe underestimating their desire and their capabilities," said Jeffrey Lewis, a nuclear weapons expert at the Middlebury Institute of International Studies at Monterey, California, who discovered the factory with his team when analyzing satellite images from the region.

Two additional missile experts who reviewed the satellite images for The Washington Post, Michael Elleman of the International Institute for Strategic Studies and Joseph Bermudez of the Center for Strategic and International Studies, agreed that the high-resolution photographs of the al-Watah site appear to depict a rocket-engine production and test facility, probably using solid fuel.

It is unclear from the satellite images whether the facility has been completed or is functionally capable of manufacturing missiles. Regardless, the complex - which satellite images suggest broke ground in 2013 when King Salman was defense minister - highlights the nation's intention to make its own advanced missiles after years of seeking to purchase them abroad, at times successfully. 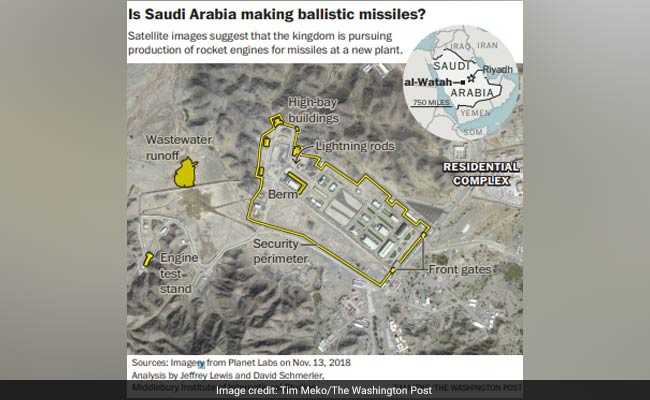 Satellite images suggest the kingdom is pursuing production of rocket engines for missiles at a new plant.

News of the facility's existence comes at an inflection point for Saudi Arabia in international affairs. The kingdom has taken a more aggressive approach to military power under its new crown prince, Mohammed bin Salman, who warned in an interview last year with "60 Minutes" that Saudi Arabia would develop a nuclear bomb if Iran does. The crown prince has been defense minister since 2015.

Saudi Arabia has been pursuing a nuclear power plant deal with the United States that would potentially include allowing it to produce nuclear fuel. The kingdom's insistence on domestic fuel production has raised worries among U.S. officials that the kingdom wants the atomic power project not only for civil use but also for covert weapon-making purposes.

The killing last October of Saudi dissident and Washington Post contributing columnist Jamal Khashoggi at the hands of Saudi agents in Istanbul has hardened opposition to the power plant deal in Congress.

A gambit by Saudi Arabia to build a ballistic-missile factory would make sense given the rivals in its neighborhood. The kingdom faces an Israel armed with an advanced nuclear and missile program and an Iran that has continued to perfect its own abilities to make ballistic missiles. Should Iran stop abiding by the 2015 nuclear accord's limitations, many analysts believe the country could attain nuclear warheads in as little as a year.

The Trump administration pulled out of the Iran deal, in part citing missile threats from Tehran that were not covered by the pact.

A functional ballistic-missile-production facility would allow Saudi Arabia to begin matching some of the domestic missile-making capabilities that Iran has developed over the years and has tapped to supply Houthi rebels fighting Saudi-backed forces in Yemen with weapons.

The existence of a Saudi strategic rocket base at al-Watah first became public in mid-2013 after Jane's Defense Weekly published satellite imagery of the military facility, which was suspected of housing ballistic missiles purchased from China.

But when Lewis and his colleagues David Schmerler and Fabian Hinz looked at satellite images of al-Watah captured by Planet Labs more recently, they discovered, in Lewis' words: "Woah, that is not just a missile base anymore."

The base was still there - with its launchpad, underground tunnels and administrative buildings - but across the road an entirely new facility had emerged, and it looked a lot like a rocket-engine production factory designed to make ballistic missiles, they said.

The facility included high-bay buildings, which Lewis says appear to be tall enough for a missile's motor case to stand on its end and be filled with fuel. Another clue was a barrier around one of the structures for protection against explosions. The site was also dotted with lightning rods because the tall metal structures can attract lighting strikes that could ignite the propellant. That the facility is in the same location as an existing Saudi missile base bolstered the case.

Above all, what appears to be a rocket engine test stand set off alarm bells. The horizontal setup, Lewis said, coupled with the lack of pipes or tanks in the images, suggests that the facility was probably designed to produce solid-fuel rockets rather than liquid-fuel ones. Solid-fuel missiles tend to be more sought after because they are easier to conceal, can be launched quicker and can be stored for a long time, making them more survivable in a conflict.

How the Saudis obtained the technological expertise necessary to build the facility is unclear. One potential supplier: China.

The Saudi engine test stand, according to Lewis, looks particularly Chinese. While most countries test rocket engines in the open, Lewis said, China partially covers the flame shooting out of the engine and cools the test building with water so it does not catch fire. The Saudi test complex appears to replicate that setup, he noted, with a trench for the water next to the stand and what appears to be water runoff.

China has sold ballistic missiles to Saudi Arabia in the past and has helped supply ballistic missile production capabilities to other nations. In the 1990s, Pakistan secretly built a medium-range missile plant using blueprints and equipment supplied by China. The factory in Pakistan has long attracted the attention of top Saudi officials.

What involvement, if any, China or Pakistan had in building the Saudi facility is unclear. Nor is it clear what kind of ballistic missiles Saudi Arabia is manufacturing or preparing to produce.

The Chinese and Pakistani embassies in Washington did not respond to requests for comment.

The plant is smaller than those of other countries, suggesting it could have a limited capacity, said Lewis, Elleman and Bermudez, and recent satellite photos do not show any cars in the parking lot at the site, raising the possibility that the plant is not yet operational. It also has fewer barriers against explosions - earthen mounds known as berms - than similar production facilities in other nations, they said.

Traditionally, the United States formally has sought to prevent the proliferation of ballistic missile technology. Washington at one point sanctioned China, for example, for delivering missile launchers and components to Pakistan in the 1990s.

"Under normal circumstances, we would be doing everything we could possibly do to constrain and convince the Saudis not to do this," Elleman said. "The U.S. has always been opposed to the transfer of missiles that are inherently capable of carrying nuclear weapons."

While the United States sells an array of weaponry to Saudi Arabia, Washington has not sold ballistic missiles to Riyadh, in part because such missiles traditionally have been seen as destabilizing for the region. Saudi Arabia has turned to China in the past when met with refusals from the United States for certain weapons requests.

For example, the United States declined repeated Saudi requests to purchase what are known as category-one American drones, including Predators and Reapers, partly because of MTCR's regulations. Instead, the kingdom turned to China, first purchasing drones and later striking a deal in which China will build a drone factory that will produce a Chinese copycat of the Predator in Saudi Arabia.