The "burnt Christmas tree" is on display in Sydney's central business district as "a symbol of support for those who've lost their homes and livelihood," according to the Australian Red Cross, which helped set it up as part of a fundraising campaign. 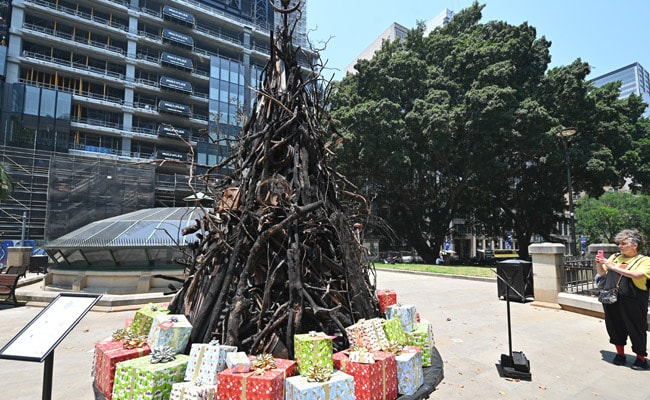 It's become a symbol of this year's tragic holiday season in Australia: a tree crafted from burned bicycles, charred wood and even a fire alarm collected in areas scorched by raging bush fires.

The "burnt Christmas tree" is on display in Sydney's central business district as "a symbol of support for those who've lost their homes and livelihood," according to the Australian Red Cross, which helped set it up as part of a fundraising campaign.

It's one of several projects underway by Australians trying to keep a holiday spirit alive as they struggle with the fallout of weeks of fierce fires, sizzling temperatures and suffocating pollution that have left eight people dead and, so far, destroyed more than 700 homes and 3 million acres of farming land.

On Friday, Australia suffered through the fourth day of a historic heatwave in the South Hemisphere summer that has swiftly surpassed previous records. The heatwave has provided fresh kindling for the over 200 bush fires that firefighters were battling across five states, leaving cities even hundreds of miles away, such as Melbourne, enveloped in hazardous smoke.

The chaos pushed Australian Prime Minister Scott Morrison to cut short a planned family trip to Hawaii. He apologized Friday for being on holiday as the fires blazed. Morrison's conservative government has tried to calm Australians by emphasizing that bush fires and droughts in the country are common. That has not eased the fears of many who see these fires as symbolizing climate change's threat to their way of life in a country that's a major producer of coal, oil, and natural gas.

In the meantime, Australians, aren't giving up. Aid groups such as the Salvation Army have set up stations across effected areas, while volunteer firefighters have deployed for weeks now despite the low pay and many dangers, including death. Charities are urging people to buy gifts, anything from crafts to a Christmas ham, from businesses in areas affected by the fires. Even firefighters in Canada have offered to give up their Christmas or winter break to come to Australia and help fight the blaze.

Australian schools are now closed for a holiday break, a popular time to travel to areas around Sydney, such as the Blue Mountains and Shoalhaven and Illawarra regions, that this year are engulfed in flames. At first Australians were hesitant to change Christmas or other vacation plans, but now authorities are warning residents of smoke-filled Sydney not to leave, lest they become caught in burning roads and inferno-like conditions, the Guardian reported.

Still, there have been little moments of luck or, for some, miracles, along the way.

A man who calls himself Neil - who told Australia's ABC that he "wished to remain anonymous because he believes that is part of the fun" - has for the past seven years decorated one tree along a road in Queensland with Christmas lights and cheer, after his wife first came up with the idea. Last year, their efforts went locally viral on Facebook when they added solar-powered lights. This year, Neil was so sure the yuletide tree would be lost to the flames that he had already bought new decorations.

But help came in the form of 70-year-old volunteer firefighter Curl Santacaterina, who insisted they save that tree. And so Santacaterina bravely stood on the back of a firetruck and sprayed a hose to water the tree as flames raged around him.

"We're really, really pleased that everybody is getting a buzz out of it and getting a bit of Christmas spirit," Neil told ABC.

He added, "When I heard it had been saved I guess I almost got a bit emotional about it. ... I thought 'wow, this has really taken off and got a bit of community spirit - a bit of something happening.' "