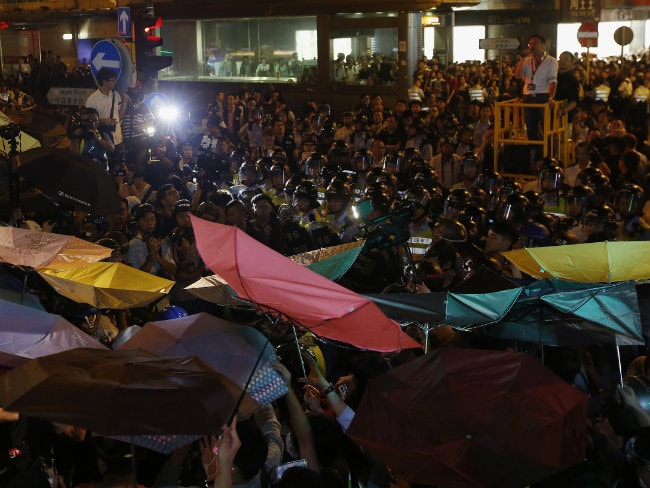 Britain's foreign secretary on Thursday said Hong Kong could still take a "meaningful step" towards democracy after mass protests posed the most serious test to the city's stability since its handover to China.

Hundreds of thousands of people took to Hong Kong's streets to call for fully free leadership elections late last year, paralysing parts of the city for more than two months.

China has promised people in the semi-autonomous city the right to vote for their next leader, or chief executive, in 2017, fulfilling a pledge made during the handover from Britain in 1997.

But Chinese authorities ruled in August that nominees must be vetted by a pro-Beijing committee -- a proposal activists have rejected as fake democracy.

"During this reporting period, 'one country, two systems' has been put to perhaps the most serious test since the handover in 1997," Foreign Secretary Philip Hammond said in Britain's bi-annual report on its former colony.

Hammond said Beijing's August decision was "clearly more restrictive than anticipated," but echoed the Hong Kong government's stance that a restricted vote is better than no vote at all.

"I do believe that there remains space within them (Beijing's parameters) for a meaningful step forward for democracy," Hammond said.

Hong Kong is ruled under a deal that allows it far greater civil liberties than those enjoyed on the Chinese mainland, including freedom of speech and the right to protest.

"I hope that the Hong Kong government and legislators can work together to achieve a consensus that is acceptable to the people of Hong Kong," he added, vowing to press for rights and freedoms enshrined in Hong Kong's constitution.

A political reform package will be considered by the city's mini-parliament later this year, but Hong Kong's pro-democracy lawmakers are able to block its passage.

Relations between China and Britain are occasionally strained by the issue of Hong Kong, with China decrying "interference" by the former power.

In December, committee of British MPs were denied visas when they attempted to visit the city to scrutinise Britain's responsibilities under the Sino-British Joint Declaration, the 1984 treaty that established procedures for the handover. However, critics are sceptical that Britain would ever risk its relationship with China over Hong Kong.
Comments
Hong KongHong Kong protestsHong Kong governmentBeijingPhilip Hammond