This Bottle Of Scotch Whisky Was Sold For Over $1 Million. Here's Why

The 60-year-old Macallan Valerio Adami 1926 was sold at Bonhams for a total $1.09 million beating a previous bottle from the same cask that was sold in Hong Kong in May for 814,081 pounds. 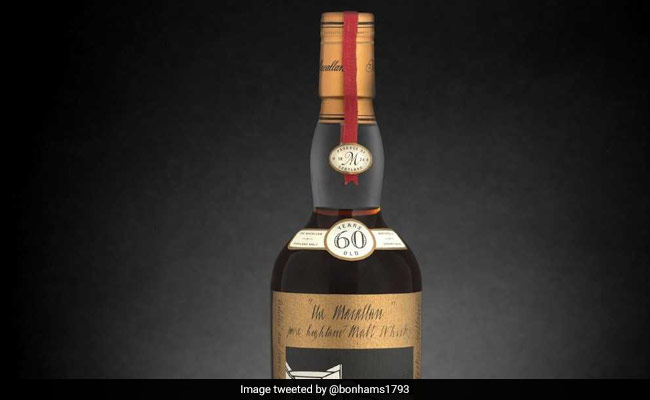 An extremely rare bottle of whisky was sold for a new world record at auction in Edinburgh today.

Richard Harvey, a drinks expert at Bonhams, told AFP: "The buyer is from the Far East where there has been an enormous interest in whisky. Whisky bars are opening up in the Far East everywhere, so there is a huge interest," he said.

In general, about "a third to 40 percent of our sales go out to buyers in the Far East," he said.

Bonhams now holds the record for the three most valuable bottles of whisky ever sold at auction.

Martin Green, a Bonhams whisky specialist in Edinburgh, said: "It is a great honour to have established a new world record, and particularly exciting to have done so here in Scotland, the home of whisky."

Just 24 bottles were produced with labels designed by two famous pop artists -- 12 by Peter Blake and 12 affixed with the Valerio Adami label which features on the bottle sold in Edinburgh on Wednesday.

It was bought by the vendor direct from the Macallan distillery for an undisclosed sum in 1994 and was part of a wider collection from the same owner offered in the sale.

It is not known how many of them still exist but one is thought to have been destroyed in an earthquake in Japan in 2011, and another is believed to have been opened and drunk.

Charles MacLean, a Scotch whisky expert, told AFP: "Whisky is the third most popular alternative investment during periods of stock market uncertainty, behind vintage cars and fine art, and its appreciation value has been higher than gold in recent years."