Bones Of 18th-Century 'Witch' Vanished Decades Ago. Now, A Search Is On

Lillias Adie was accused of having sex with the devil and sentenced to burn at the stake -- but she died in prison first. 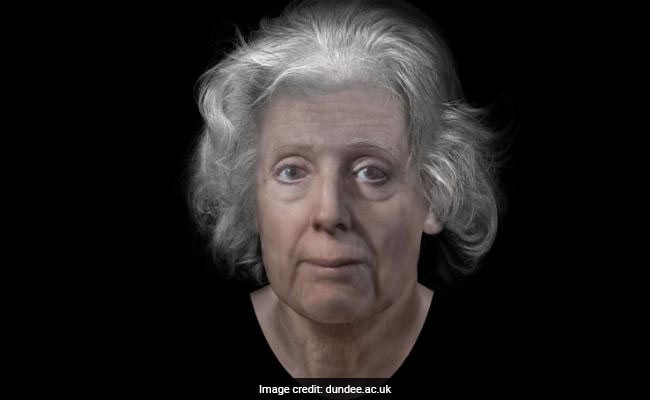 A facial reconstruction of Lilias Adie done by University of Dundee forensic artists in 2017.

A woman felt delirious after an evening of drinking one night in 1704 - and so she concluded that her neighbor, Lilias Adie, must have summoned Satan to cast a spell on her.

Adie was arrested and dragged before the local minister in the coastal Scottish town of Torryburn, Fife. There, she was accused of practicing witchcraft and having sex with the devil. Like hundreds of accused witches during the 17th and early 18th centuries, Adie was sentenced to burn at the stake after the church wrangled a confession out of her, but it would never happen. Adie died in prison first - a suicide, historians suspect - and so the townspeople buried her in a crude muddy grave on a beach, covering the burial site with a large stone so she couldn't rise from the dead.

A few years ago, an archaeologist found the burial grounds. But there's a problem: Her remains are missing.

And on Saturday, marking the 315th anniversary of Adie's death, Fife officials asked whoever might have the accused witch's remains to bring them back.

"Lilias Adie is the only witch's grave in Scotland. The rest were all burned," Fife Councilor Kate Stewart told the Scotsman. " . . . We're trying to trace her to bring her home to Torryburn."

Adie's remains, namely her skull, have been missing since 1938, when her skull was last displayed at an exhibition in Glasgow, Scotland. Her other bones were likely sold all around the world after antique collectors pilfered her coffin in 1852. For decades, numerous efforts to find her skull and bones have failed, leading Fife officials to plead with the public to come forward with tips.

It's part of a broader campaign they unveiled Saturday to memorialize the thousands of people who were wrongfully persecuted, tortured or executed on suspicion of being witches. Of the more than 3,500 people accused of practicing witchcraft through the early 18th century, the vast majority were women, hundreds of whom were burned to ashes, leaving no artifacts or remains behind.

To officials in Fife, one of Scotland's largest counties, that's why finding Adie is crucial. They said Saturday they wanted to turn her apparent gravesite into a memorial - preferably if her remains were actually there.

"It's important to recognize that Lilias Adie and the thousands of other men and women accused of witchcraft in early modern Scotland were not the evil people history has portrayed them to be," said Fife's Deputy Provost Councilor Julie Ford. "They were the innocent victims of unenlightened times."

The details of Adie's case are preserved in 1704 council meeting minutes, describing a building fanaticism among neighbors who believed a possibly drunk woman's claims that Adie was "Coming to take me!" in the dead of night. They believed Adie was an instrument of Satan, channeling the devil's powers to "molest" neighbors she didn't get along with. Once Adie was arrested, she would remain in jail for just over a month, enduring days of interrogations and possible torture, such as prolonged sleep deprivation or "witch pricking."

She offered the local minister a sensational tale, saying she first met the devil in a cornfield just before sundown. He was wearing a hat, she said, and had cold pale skin and cloven-hoofed feet like a cow. He persuaded her to renounce her baptism. And then he "[laid] with her carnally," as the town officials described the alleged paranormal sex in the council meeting minutes. From then on, Adie said, the devil visited her at home "like a shadow." She said she attended other meetings, dancing with the devil in groups.

But when officials asked for names of other witches, she didn't give them any they didn't already have.

"The point of the interrogation and its cruelties was to get names," BBC historian Louise Yeoman said in 2017, while working in partnership with University of Dundee forensic artists, who tried to reconstruct Adie's face. "Lilias said that she couldn't give the names of other women at the witches' gatherings as they were masked like gentlewomen."

Interest in Adie's story was renewed in 2014, when Fife Council archaeologist Douglas Speirs went looking for her final resting place, also in partnership with the BBC. Using historical documents describing its location, Speirs headed to the shore of Torryburn Bay.

Speirs found a large sandstone slab covered in seaweed, exactly where they thought it would be, he told The Washington Post.

The decision to bury Adie this way, Speirs said, pointed to fears of resurrection - like a Satan-powered zombie. At the time of Adie's death, he said, people believed that Satan could bring his followers back from the dead to haunt the living - unless they were buried properly. Most of the time, Speirs said, priests believed burning witches at the stake would solve the problem. But not for witches who died before they could repent - as in Adie's case, the priest believed. These witches, Speirs said, would need to be buried on the shore, far from consecrated ground, with enormous stones holding down her soul. The feared Satan zombies were called "revenants."

"The problem the minister, Rev. Allan Logan, had back in late August 1704 was that he had a witch die on him who had confessed to her soul being in the possession of Satan," Speirs said in an email. The possibility that she might rise from the dead was the 18th century equivalent of the possibility of a convicted murderer busting out of a low-security prison. "Hence the need for the unusual, extreme and expensive revenant methods used for the disposal of her corpse," Speirs said.

Rediscovering Adie's gravesite, he said, marked "the only known surviving example of a revenant with burial in Scotland."

In her afterlife, Adie was like celebrity for a time, Speirs said. When curio hunters dug up her grave in 1852, they didn't leave much behind, even taking the wood from her crude coffin. Andrew Carnegie was given one of the coffin pieces, which had been transformed into a walking stick, Speirs said.

But her skull had a different fate. The antique-collecting grave raiders who took it were working under the direction of an antiquarian named Joseph Neil Paton, who was interested in the field of phrenology, Speirs said. The much discredited pseudoscience involved measuring bumps on a person's skull as a way to predict their personality traits - but little is known about what became of Adie's cranium.

Once Paton was finished finagling with it, he gave it to the Fife Medical Association, which then gave it to students at the University of St. Andrews for the school's anatomy collection, the National reported.

Photos taken of the skull while it was kept there would later help the University of Dundee forensic artists reconstruct her face based on her bone structure. They released the results in 2017, describing her as the only accused witch in Scotland's history who has a face to go with her name.

"There was nothing in Lilias' story that suggested to me that nowadays she would be considered as anything other than a victim of horrible circumstances," forensic artist Christopher Rynn said in a 2017 statement. "So I saw no reason to pull the face into an unpleasant or mean expression and she ended up having quite a kind face, quite naturally."

On Saturday, several Fife officials joined a group of people dedicated to memorializing witch-hunt victims to lay wreaths on Adie's apparent grave. Stewart said she and other council members wanted to make the site apart of a"Witches Memorial Trail" that would snake through west Fife, where some of the most notorious witch trials took place.

"We are wanting a memorial not just for her but for everybody who perished after being accused of being a witch," Stewart told the National. "There is no recognition that these people were killed for nothing."