Bomb near Egypt mission in Libya city, none hurt: security 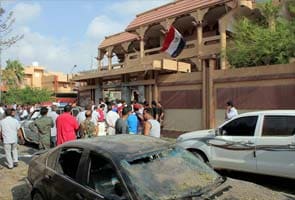 Benghazi, Libya: A bomb exploded on Saturday in front of Egypt's consulate in the eastern Libyan city of Benghazi, causing no casualties but some damage, a security official said.

"Unknown assailants in a vehicle threw an explosive device at the Egyptian consulate in Benghazi without causing casualties," said security spokesman Abdallah al-Zayedi.

The blast caused part of the outer wall of the building to collapse and damaged cars parked outside the mission, he added.

"The security services have a description of the vehicle and are pursuing it," said Zayedi.

The attack came as dozens of people protested outside the consulate against a deadly police crackdown Wednesday on supporters of Egypt's ousted Islamist president Mohamed Morsi.

A security source said, meanwhile, that the protesters were members of Libya's Muslim Brotherhood and that "they were the target of the attack".

The Libyan government said Saturday it has adopted a policy of neutrality regarding the situation in neighbouring Egypt.

"Libya believes that what is happening in Egypt... is strictly an internal Egyptian affair in which the Libyan government will not interfere," the government said.

The statement said Tripoli supported moves to ensure consensus building, safety and security in Egypt, while expressing "deep regret and pain for lost lives and bloodshed".

Promoted
Listen to the latest songs, only on JioSaavn.com
The Egyptian army ended Morsi's single year of turbulent rule on July 3 after mass protests calling for him to step down, triggering clashes in which hundreds of people have been killed.