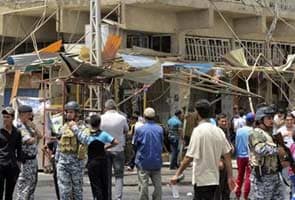 Baghdad: Two bomb attacks near Sunni mosques in the Iraqi capital killed at least 23 people who had gathered to pray after breaking their daily fast for the Muslim holy month of Ramadan on Saturday, police and medics said.

A car packed with explosives went off near the Mulla Hwesh mosque in Baghdad's western district of Jamia, killing at least seven people, and a suicide bomber blew himself up in the southern Doura neighbourhood, leaving 16 dead.

"A bomb exploded while worshippers were leaving the mosque of Khalid Bin al-Waleed. Bodies were thrown back by the power of the explosion," said a policeman at the scene of the blast in Doura.

The violence is part of a sustained campaign of militant attacks since the start of the year that has prompted fears of wider conflict in a country where ethnic Kurds and Shi'ite and Sunni Muslims have yet to find a stable power-sharing compromise.

It was not clear who was behind Saturday's explosions.

Sunni insurgents, including the Al Qaeda-affiliated Islamic State of Iraq, have been recruiting from Iraq's Sunni minority, which resents Shi'ite domination since the US-led invasion that toppled Saddam Hussein in 2003.

So far this month, some 334 people have been killed in militant attacks, according to the monitoring group Iraq Body Count.

Elsewhere on Saturday, four policemen were killed when a car packed with explosives driven by an apparent suicide bomber was fired on by police near Baquba, about 50 km northeast of Baghdad, and blew up, police and medics said.

Police said the bomber's target was a funeral tent nearby.

A fifth policeman was killed when a bomb exploded near his patrol in Madaen, a town 30 km southeast of Baghdad.

Sectarian tensions have been inflamed by the civil war in neighbouring Syria, which is fast becoming a region-wide proxy war, drawing in Shi'ite and Sunni fighters from Iraq and beyond to fight on opposite sides of the conflict.

Promoted
Listen to the latest songs, only on JioSaavn.com
Instability has fuelled concerns of a return to full-blown civil conflict, although the level of violence is still well below the height of sectarian bloodletting in 2006-07, when the monthly death toll sometimes exceeded 3,000.

The number of people killed in militant attacks in the month of June was 761.
© Thomson Reuters 2013