About 2,750 billionaires control 3.5% of the world's wealth, the Paris-based Global Inequality Lab said in a report Tuesday.

The share of global wealth held by billionaires surged to a record during the Covid-19 crisis, according to a group founded by French economist Thomas Piketty.

About 2,750 billionaires control 3.5% of the world's wealth, the Paris-based Global Inequality Lab said in a report Tuesday. That's up from 1% in 1995, with the fastest gains coming since the pandemic hit, the group said. The poorest half of the planet's population owns about 2% of its riches.

The study's findings add to a debate about worsening inequality during a public health crisis that's hurt developing economies -- which are short of vaccines as well as financial resources to cushion the blow -- even more than advanced ones. Within the rich world too, financial and real-estate markets have soared since the depths of the slump last year, widening domestic gaps. 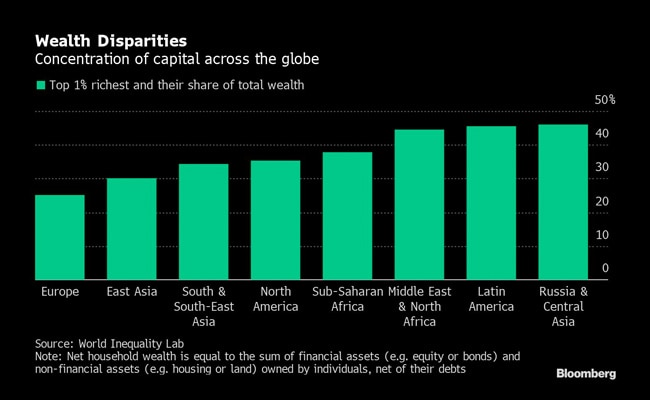 Those pandemic trends come after decades of policy that was often geared toward people at the top, on the expectation that it would "trickle down" and everyone else would ultimately benefit too, according to Lucas Chancel, one of the report's authors.

"There is really this polarization on top of a world that was already very unequal before the pandemic," Chancel, co-director of the World Inequality Lab, said in an interview. He said billionaires accumulated 3.6 trillion euros ($4.1 trillion) of wealth during a crisis in which the World Bank estimates that some 100 million people have fallen into extreme poverty.

Across most parts of the world, the richest 10% of people control roughly 60% to 80% of wealth. But the report highlights some clear regional distinctions.

Overall, poorer countries have been catching up with richer ones -- but within those developing nations, inequality has soared. Same-country disparities now account for more than two-thirds of global inequality, up from roughly half in 2000, according to the Lab.

Latin America and the Middle East are the world's most unequal regions, with more than 75% of wealth in the hands of the top 10%, the report says. Russia and sub-Saharan Africa aren't far behind.

Other emerging economies like India still suffer from a "missing middle class," Chancel said. "Colonial inequalities have been replaced by market inequality." 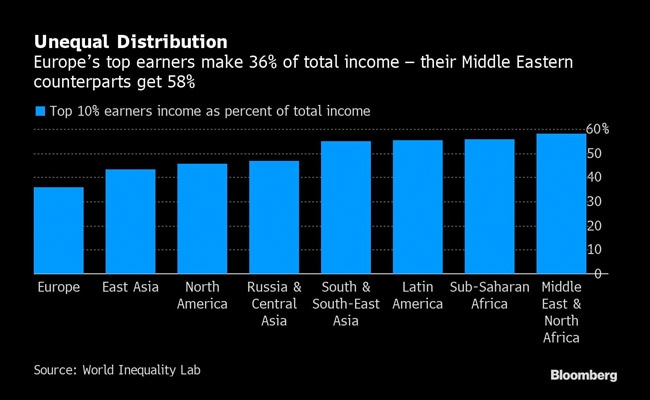 Wealth gaps are reflected in bigger carbon footprints, too. In North America, for example, the top 10% emits an average 73 metric tons per capita each year, compared with less than 10 tons for the poorest half.

Measured by both income and wealth, Europe is the most equitable region, according to the report. The 19% of total income earned by the poorest half of Europeans is higher than the equivalent share for that group anywhere else. Pandemic policies like income support for workers thrown out of their jobs likely helped prevent that gap from widening further.

"The Covid crisis has exacerbated inequalities between the very wealthy and the rest of the population," said Chancel. "Yet in rich countries, government intervention prevented a massive rise in poverty."

The World Inequality Report 2022 is based on work by more than 100 researchers around the globe, led by economists at the Paris School of Economics and the University of California at Berkeley. The first version of the study came out in 2018.

--With assistance from Giovanni Salzano.