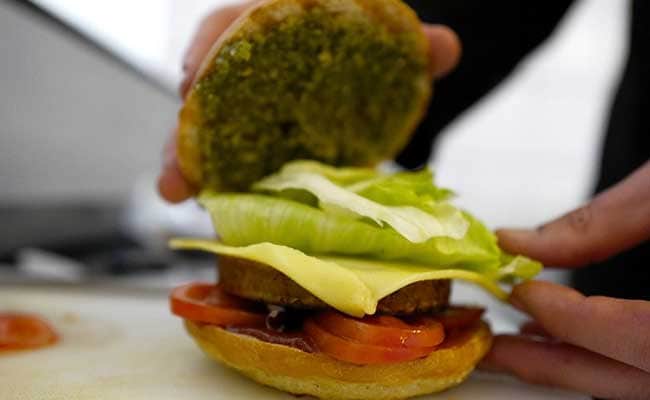 Vegan "burger" made of wild garlic (Baerlauch) at the vegan restaurant "L'Herbivore" in Berlin. (AFP)

Berlin: Long the European capital of techno-driven nightlife, fastidious hipsterdom and low-cost party weekends, Berlin is adding another string to its bow as a vegan haven.

Animal product-free versions of almost any business can be found in Germany's largest city, from butchers' shops to singles' nights.

But getting lost in the eyes of a romantic prospect over grilled tofu is far from all that's on offer for the city's 80,000 vegans -- around 10 percent of the nationwide figure, vegetarian association Vebu estimates.

"Germany and especially Berlin are at the forefront" of a vegan "movement" that's advancing all over Europe, Vebu vice-president Sebastian Joy told AFP.

That's obvious from the roughly 60 vegan restaurants on offer in the German capital counted by specialist website Happy Cow -- far outstripping the 24 in Paris and 40 in London, both cities more than twice the size of Berlin. 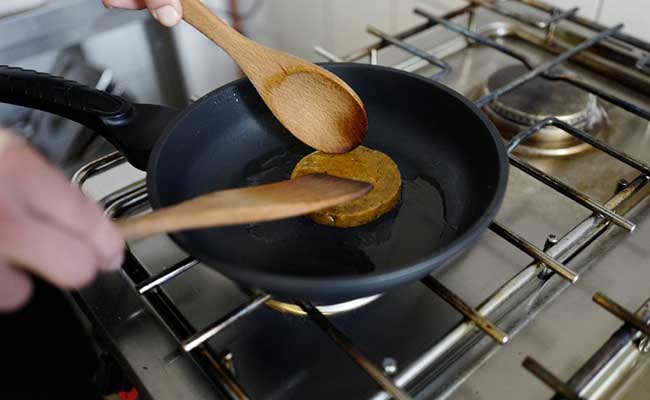 That figure has ballooned since 2008, when there were just three completely animal-free restaurants according to Vebu.

On top of the roughly 10 new eateries opening each year, a whole lifestyle is falling into place.

Schivelbeiner Strasse in the Prenzlauer Berg neighbourhood in northeast Berlin, popular with startup workers and young parents, has become a "Vegan Avenue".

Initiates can stroll from supermarket to cafe to clothes- and shoe-shops and carry their purchases home with vegan consciences clear.

The food shelves without cheese, yoghurt or honey and clothing racks without wool or leather are a far cry from the luxurious treats at KaDeWe -- the German answer to Harrods or Galeries Lafayette.

Today in 2016, growth in what's on offer, from soy ice-cream to Europe's first 100 percent-vegan pizzeria, means that "Berlin is almost comparable to New York" in terms of options for vegans, said yoga teacher and long-time adept of the lifestyle Moritz Ulrich.

But the sudden aura of cool around veganism has uprooted the movement from its woollen-socks-with-sandals origins.

In early 2016, police were called to break up a vegan restaurant opening after hundreds of people showed up to the event, swarming over the pavement and even blocking traffic.

The new fast-food joint had become the evening's hot ticket on Facebook among fans of the fashion-blogger owners.

"Being vegan is no longer an abstemious practise for a few fundamentalist animal-lovers, but part of hedonistic event culture," sniffed Munich broadsheet Sueddeutsche Zeitung.

The Facebook crowds fit into a growing, fluid category of "flexitarians", who may see part-time veganism as a way to eat more healthily or care a little more for the environment.

"People are asking more and more questions about where the food on their plate comes from," said Johannes Theuerl, the owner of a vegan butcher's shop.

On offer at his counter are "meatballs" and slices of roast seitan, a food based on wheat proteins.

"Beyond reducing meat consumption, we see that people also want to eat seasonal and regional produce," Theuerl went on.

Proponents say that traditional vegans' upsets about such meat substitutes are past their sell-by date.

"I've had enough of the cliche about the activist who expects others to adopt the same lifestyle," heartthrob vegan celebrity chef Attila Hildmann told Deutschlandradiokultur, complaining of an "ideological wall" around veganism.

Some people just insist that "meat is a crime, without proposing an alternative," he went on.

But with veganism on the radar of Berlin's entrepreneurs, foodies, and fad-seeking young followers of fashion, more alternatives are emerging all the time.

Nowadays, "people who give up meat aren't doing it because they don't like it," said Vebu's Joy, who picks a distinctly 21st-Century analogy to drive his argument home.

"You can drive an electric car because you see the damage done by diesel without wanting to switch to a bike."