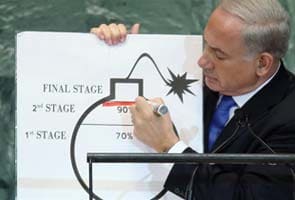 United Nations: Israeli Prime Minister Benjamin Netanyahu warned that Iran will have enough enriched uranium to make a nuclear bomb by next summer and urged the world the draw a clear "red line" to stop it in its tracks.

Flashing a diagram showing the progress Iran has made, he said it was getting "late, very late" to stop Iran.

Speaking on Thursday before the United Nations he said, "Red lines don't lead to war, red lines prevent war. Nothing could imperil the world more than a nuclear-armed Iran."

Mr Netanyahu said Iran had completed the first stage of uranium enrichment, saying "they are 70 percent of the way there."

Mr Netanyahu has repeatedly argued that time is running out to stop the Islamic Republic from becoming a nuclear power and the threat of force must be seriously considered.

Israeli leaders have issued a series of warnings in recent weeks suggesting that if Iran's uranium enrichment program continues it may soon stage a unilateral military strike, flouting even American wishes.

The Obama administration has urgently sought to hold off Israeli military action, which would likely result in the US being pulled into a conflict and cause region-wide mayhem on the eve of American elections.

Israel considers a nuclear-armed Iran to be an existential threat, citing Iranian denials of the Holocaust, its calls for Israel's destruction, its development of missiles capable of striking the Jewish state and its support for hostile Arab militant groups.