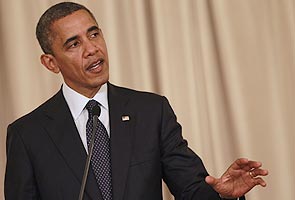 Bangkok: Poised to become the first US head of state to travel to Myanmar, President Barack Obama will attempt to strike a balance on Monday between praising the government's progress in shaking off military rule and pressing it for further reforms.

Obama will meet President Thein Sein, a former junta member who has spearheaded reforms since taking office in March 2011, and famed opposition leader Aung San Suu Kyi, who led the struggle against military rule and, like Obama, is a Nobel Peace Prize laureate. She is now a lawmaker.

Obama's trek to Myanmar is meant to highlight what the White House has touted as a major foreign policy achievement -- its success in pushing the country's generals to enact changes that have unfolded with surprising speed over the past year.

But some international human rights group object to the Myanmar visit, saying Obama is rewarding the country's government for a job they regard as incomplete.

Speaking in Thailand on the eve of his landmark visit to the former pariah state, Obama denied he was going there to offer his "endorsement" or that his trip was premature.

Instead, he insisted his intention was to acknowledge that Myanmar, also known as Burma, had opened the door to democratic change but there was still much more to do.

"I don't think anybody is under the illusion that Burma's arrived, that they're where they need to be," Obama told a news conference as he began a three-country Asian tour, his first trip abroad since winning a second term.

"On the other hand, if we waited to engage until they had achieved a perfect democracy, my suspicion is we'd be waiting an awful long time," he said.

The Myanmar visit, less than two weeks after his re-election, is the centrepiece of a trip aimed at showing Obama is serious about shifting the US strategic focus eastwards as America winds down wars in Iraq and Afghanistan. The so-called "Asia pivot" is also meant to counter China's rising influence.

But Obama arrives with his attention divided as he faces a mounting conflict in the Gaza Strip and grapples with a looming fiscal crisis at home.

"Obama's trip to Burma risks providing an undeserved seal of approval to the military-dominated government that is still violating human rights," Brad Adams, Asia director at Human Rights Watch, said before the president arrived in the region.

Obama's aides said he was determined to "lock in" democratic changes already under way but will also press for further action, including freeing remaining political prisoners and stronger efforts to curb ethnic and sectarian violence.

A senior US official said Obama would announce the resumption of US aid programmes in Myanmar during his visit, anticipating assistance of $170 million in fiscal 2012 and 2013, but this, too, would be dependent on further reforms.

"The president will be announcing that the United States is re-establishing a USAID mission in Burma, which has been suspended for many years," the official told reporters in Bangkok, declining to be named.

"Our continued ramping-up of our efforts within Burma is contingent upon the government continuing to address the issues at hand on political reform, on national reconciliation and on a development that reaches their people," the official added.

The United States has softened sanctions and removed a ban on most imports from Myanmar in response to reforms already undertaken, but it has set conditions for the full normalisation of relations, such as the release of all political detainees.

Late on Sunday, state television in Myanmar said 66 more prisoners would be released on Monday, bringing to 518 the number released over the past week.

The previous batch did not appear to include any political prisoners, but a senior prison department official, who declined to be identified, told Reuters that Myint Aye, a prominent human rights activist, would be among those freed on Monday.

Obama will make his first stop at the Parliament Building in Yangon, the former capital of Myanmar, for talks with Thein Sein. He will see Suu Kyi at the lakeside villa where she was held under house arrest for most of the past two decades until her release in 2010. Obama will then cap his six-hour visit with a speech at Yangon University.

Violence between majority Buddhists and the Rohingya Muslim minority in western Myanmar is a top concern, and Obama's aides said he would address the issue directly with Myanmar's leaders.

At least 167 people were killed in two periods of violence in Rakhine state in June and October this year.

Myanmar considers the Rohingya Muslims to be illegal immigrants from neighbouring Bangladesh and does not recognise them as citizens. A Reuters investigation into the wave of sectarian assaults painted a picture of organised attacks against the Muslim community.

Thein Sein, in a letter to UN Secretary-General Ban Ki-moon last week, promised to tackle the root causes of the problem, the United Nations said.

Despite human rights concerns, the White House sees Myanmar as a legacy-building success story of Obama's policy of seeking engagement with U.S. enemies, a strategy notably that has gone almost nowhere with countries like Iran and North Korea.

Obama's visit to Myanmar, sandwiched between stops in Thailand and Cambodia, also fits the administration's strategy of trying to lure China's neighbours out of Beijing's orbit.

Obama's trip comes almost a year after he said he saw "flickers of progress" in Myanmar and dispatched Secretary of State Hillary Clinton to visit the isolated country.

Clinton, who does not plan to stay in her post beyond Obama's first term, will join Obama on his Myanmar visit.

For Obama, the visit carries added significance. He received his Nobel Peace Prize less than a year after taking office in 2009. The award was widely seen as recognising him more for lofty speech-making than for any major accomplishment on the world stage. This is a chance to tout a foreign policy success.
© Thomson Reuters 2012
Comments
Obama's Myanmar visit