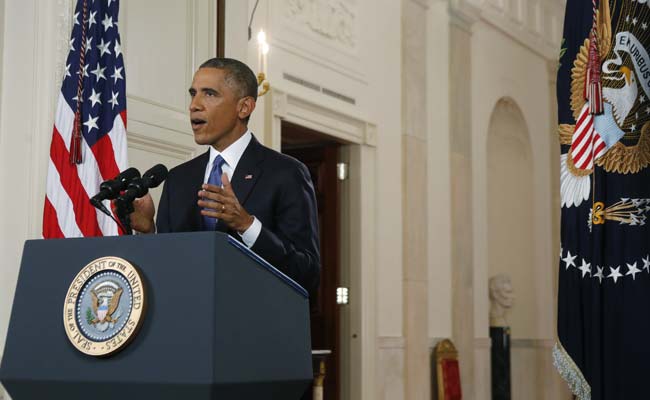 File photo of US President Barack Obama at the White House in Washington. (Associated Press)

Washington: US President Barack Obama defended the importance of peaceful protests during an interview broadcast on Monday, saying they were necessary to help bring about social change.

Obama's comments on BET, a black-oriented television network, came as protests continued across the country following decisions by grand juries in Missouri and New York not to indict white police officers in the deaths of unarmed black men.

"I think as long as they're peaceful, I think they're necessary," Obama said of the protests. "When they turn violent, then they're counterproductive."

The chokehold death of Eric Garner in New York and the fatal shooting of Michael Brown in Ferguson, Missouri, this past summer have highlighted the strained relations between police and the black community and rekindled a national debate over US race relations.

Obama, who said he had met at the White House with some of the protest organizers, said: "A country's conscience sometimes has to be triggered by some inconvenience, because I think a lot of people who saw the Eric Garner video are troubled, even if they haven't had that same experience themselves. Even if they're not African-American or Latino."

Promoted
Listen to the latest songs, only on JioSaavn.com
"The value of peaceful protests, activism, organizing is it reminds the society this is not yet done," he said.

America's first black president said the issue was not just personal for him and his family, "but as president, I consider this to be one of the most important issues we face. Because America works when everybody feels as if they are being treated fairly and that they've got a fair shot."
© Thomson Reuters 2014