Teen climate activist Greta Thunberg is visiting the United States after crossing the Atlantic in an emissions-free boat. 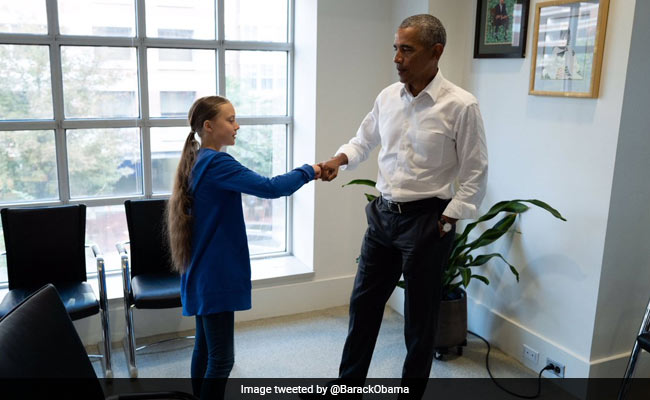 Teen activist Greta Thunberg has a jam-packed itinerary for her trip to the United States: Lead a global climate protest; appear on "The Daily Show"; learn how to fist-bump from a former president of the United States.

Thunberg, the Swedish 16-year-old whose year-long "school strike for climate" outside her country's parliament has sparked a global youth movement, met with Barack Obama at his office in Washington, D.C., Monday.

"All of these young people [in the United States] seem so eager, very enthusiastic," Thunberg told Obama in a video of their short meeting released Tuesday. "Which is a very good thing. I mean, no one is too small to have an impact."

Thunberg arrived in the United States late last month after a two-week voyage across the Atlantic on a zero-emissions sailboat (the teenager refuses to take planes). In New York, she met with fellow school strikers and United Nations officials. Here in Washington, she has protested outside the White House and picked up an award from Amnesty International, and she is scheduled to give an address to members of Congress.

This Friday, the teen will lead a rally in New York ahead of a United Nations summit on climate action. Hundreds of thousands of youths in at least 150 countries have said they will walk out of school in solidarity with her.

"You and me, we're a team," Obama told the teenager during their meeting Monday. (He didn't specify what they'd teamed up on.) Then he wished her good luck, and, shaking his hand, Greta wished him luck in return.

Several of Obama's environmental policies have been rolled back under the Trump administration, most recently, a 2015 rule that gave the Environmental Protection Agency broad authority to protect the nation's waterways.

"Our future will be shaped by the next generation," the Obama foundation said Tuesday when it tweeted out a video of their meeting.