Eric McKay and his family gave away several peanut butter to other workers furloughed during the longest government shutdown in US history. 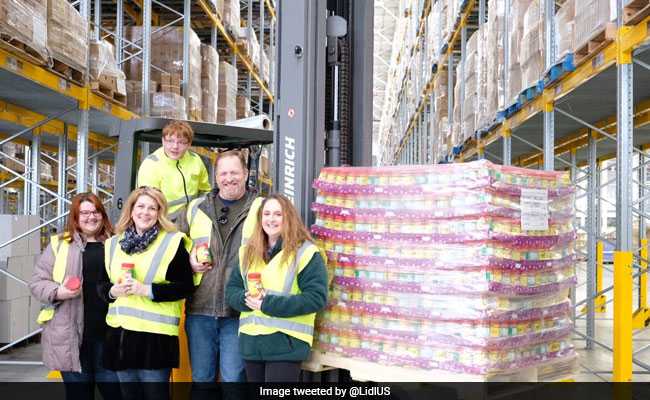 Eric McKay's father has also been without pay as US government shutdown drags on.

He prefers it with jelly slathered on two English muffins each day for breakfast, lunch and dinner. His mother, Tracy McKay, said he goes through a jar every three days. But his supply was running low.

Eric, who has autism, tweeted to grocery store chain Lidl to ask when peanut butter would go on sale again. His mother had bought 72 jars last February at their local store's grand opening. The company responded with a challenge: Get 72,000 retweets, and in exchange they would give him a lifetime supply of store-brand peanut butter.

With his father - a furloughed federal worker - at his side at the Lidl store in Dumfries, Virginia, Eric and his family gave away several peanut butter jars Jan. 23 to other workers furloughed during the longest government shutdown in U.S. history. Eric is planning another peanut butter giveaway Saturday.

His mother said her family, of Woodbridge, Virginia, including Eric's three teenage siblings, have been making do "on a shoestring" since her husband has been unable to work because of the partial shutdown. He provides the family's main source of income.

She said Eric, who goes by the nickname "Bean," told her he wanted to give away the peanut butter because "my dad is stuck at home. We don't have any income, but we do have peanut butter, so we should share it." Tracy McKay said, "To him, it was the obvious thing to do."

His mother said Eric's preference for a particular food isn't uncommon for people with autism, who can be sensitive to tastes, textures and sounds. She said they often choose to narrow their diets to foods with which they're comfortable.

The teenager's peanut butter challenge started after his mom bought six cases of Lidl peanut butter when it was on sale at the Virginia store for 78 cents a jar. There was no limit, so she bought as much as she thought they could eat before it expired. Tracy McKay, who doesn't like peanut butter, said Eric numbered the jars and put them in their basement.

When Eric told his mother about his supply running low, she suggested that he tweet to Lidl to ask when it would be on sale again. The store responded in a Twitter message and gave him another 72 jars - then upped the ante.

Lidl challenged him to reach 72,000 retweets, saying that in exchange, the business would give him a lifetime supply of peanut butter.

At first, his mom thought this "is never going to happen." Eric had just five Twitter followers. But then she said it "just grew organically," with friends and family retweeting it. He now has more than 2,200 followers.

By Christmas, he reached 40,000 retweets. Then his message really took off, when British author Neil Gaiman and former White House intern Monica Lewinsky retweeted it. Tracy McKay said she thinks Eric's goal took off when Gaiman "didn't just retweet it, but he engaged and talked about autism and people having food sensitivities."

His mom said Lidl gave Eric a "peanut butter card" so he can get more when he needs it, but Eric said he wanted to share it with others, especially furloughed federal workers like his father.

She said Eric's peanut butter challenge has spawned mostly positive reactions on social media. Many Twitter followers - some of whom have autism - shared their favorite foods and congratulated Eric on sharing his experience.

On Twitter, @illumiwookie wrote, "Bean for Prez, 20Whatever. You're a good human." Another person on Twitter, @Hammertime_Teri said, "You are a complete angel and a godsend."

Eric's three siblings have also been excited about the peanut butter challenge and helped in retweeting it. Tracy McKay said she "couldn't be prouder," and her husband, she said, "is pleased as punch." She said it has been a good lesson for Eric's siblings on how things can take on a life of their own on the Internet.

After his first giveaway Wednesday, Eric got in the car with his mother and said, "Mom, that just felt so good."

(Except for the headline, this story has not been edited by NDTV staff and is published from a syndicated feed.)
Comments
Peanut butterUS teenUS government shutdown