At Least 100 Still Feared Trapped In Indonesia Mine

National disaster agency spokesman Sutopo Purwo Nugroho said the number of miners inside the shafts at the time of the accident was still not known as survivors had given varying tallies. 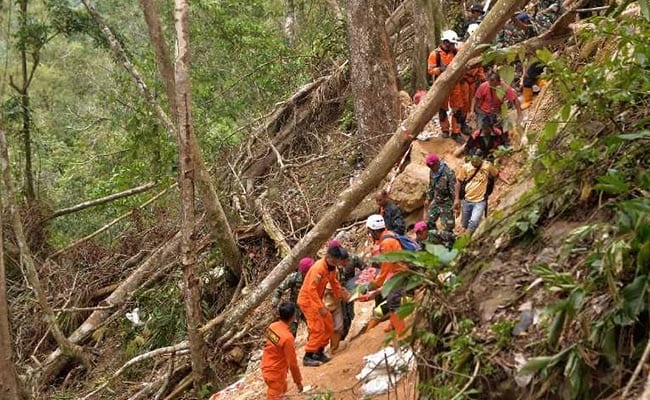 Because of precarious conditions, rescue workers earlier had to dig by hand to try to reach any survivors

Indonesian authorities warned Monday that up to 100 people could still be trapped and feared dead inside a collapsed illegal gold mine despite a painstaking rescue effort that has so far plucked 19 people alive from the rubble, but also seen nine deaths.

Search teams at the unlicensed mine on Sulawesi island have been hampered by steep terrain, unstable soil and dangerously narrow mining shafts since a landslide caused the accident last Tuesday.

While authorities said the search and rescue effort would continue for another week, they made no mention of continuing efforts to get food and water to any possible survivors.

National disaster agency spokesman Sutopo Purwo Nugroho said the number of miners inside the shafts at the time of the accident was still not known as survivors had given varying tallies.

Because of the precarious conditions, rescue workers initially had to dig by hand to try to reach any survivors, but relatives of those trapped last week gave permission for heavy-duty machinery to be deployed.

Although mechanised diggers cleared debris from the entrance of one hole on Sunday, they found no more survivors.

The accident happened in the Bolaang Mongondow region of North Sulawesi, where five miners were killed in December after a similar illegal gold mine accident.

Mineral-rich Indonesia has scores of unlicensed mines -- many with complete disregard for even the most basic safety procedures.

In 2016, 11 miners died after a mudslide engulfed an illegal gold mine in Sumatra's Jambi province.

In 2015, 12 people died when a mineshaft collapsed on Java island, and 11 miners died on Sumatra island when a mudslide engulfed a mine in Jambi province.