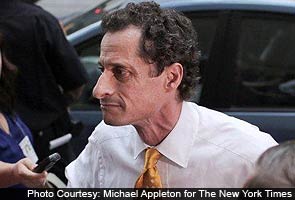 Weiner, appearing shaken and at times rambling as he faced reporters, revised his previous estimate of the total number of women with whom he had engaged in sexual encounters online to 10, up from six.

But in a sign of how difficult the furor over his behavior may be to contain, he made clear he could not say for certain how many women or lewd images might yet surface.

"There are more than - there are a few," Weiner, a Democrat, said. "I don't have a specific number for you." Later, he tried to explain the sequence of his Internet relationships: "Sometimes they didn't go consistently. Whatever."

Weiner's once-resurgent political standing in New York City seemed to erode by the moment, as more graphic pictures of his penis appeared online and his conduct and lack of candor were denounced from the campaign trail to the halls of Congress.

Rep. Nancy Pelosi, D-Calif. and the House minority leader, described Weiner's behavior as "reprehensible; it's so disrespectful of women."

Even Weiner's rank-and-file donors said they were disillusioned by the disclosures that had recast the candidate who they viewed as a liberal hero into a habitually misbehaving and misleading figure.

"This kind of behavior is very bad," said Kishore Belani, the owner of a video company in Queens who recently contributed to Weiner's campaign. "I don't think that he deserves another chance."

"I have children," Belani added. "For children, this is not a good politician to learn from."

The accounting of online flirtations offered by Weiner, 48, on Thursday, while at times awkward, was the most detailed he has provided since he resigned from office in 2011, vowing to learn from his mistakes, reconcile with his wife and seek therapy.

When he re-emerged this spring, asking for a second chance to serve the public, he portrayed himself as a rehabilitated figure who since his resignation had reflected on his past errors and abandoned his habit of sending lewd messages and photos to strangers he met online.

But those claims were belied by a series of embarrassing admissions this week. On Tuesday, he said he had initiated explicit exchanges with a young woman from Indiana a year after he had resigned, using the alias "Carlos Danger"; and on Thursday, he acknowledged doing the same with two more women during the same period.

The latest revelations jolted a candidate who had improbably climbed to the top of polls, and they invited searing attacks from rivals and the city's political establishment.

"To me, he has committed the cardinal sins: those are, lying to the public," said Richard D. Emery, a civil rights and election lawyer in New York who is supporting Public Advocate Bill de Blasio, who is also seeking the Democratic nomination for mayor. "Lots of politicians do it, but he has done it in a way that reaches new heights of hypocrisy."

Weiner, he said, "has really forfeited his right to participate in the election."

Adding to the melodrama, the Indiana woman with whom Weiner connected for his most recent online escapade emerged publicly, appearing on "Inside Edition," the tabloid television show, to describe their relationship, which lasted months and continued even as he made plans to run for mayor.

Leathers, 23, a Democratic activist who once revered Weiner for his strident voice on liberal causes, accused him of lying to his wife and to the public about ending his online dalliance.

She urged Weiner to leave the campaign. "Stop lying, stop embarrassing his wife and get help," she said.

Weiner said Thursday he was still seeking professional help for his online behavior, and he did not believe he had an addiction.

He made his comments as he tried to shift the spotlight from his personal life to his policy ideas, by going to a soup kitchen in Brooklyn, N.Y., to lay out his plan to appoint a Cabinet-level official to oversee nonprofit groups in the city.

"I want to return to having a conversation," he said. "I don't know if I'll have a chance to."

But questions about his character kept cropping up. After he accused a Democratic rival, Christine C. Quinn, of misleading the public on changing term limits, Quinn, who is the City Council speaker, questioned his fitness for public office at a news conference in Lower Manhattan.

She went after him for a "pattern of reckless behavior" and his "significant challenge with telling the truth."

Even as his opponents and the newspaper editorial boards called for Weiner to abandon his bid for mayor, his most ardent supporters said they would overlook his failings.

"It's completely irrelevant to his ability to be mayor," said Adam R. Rose, co-president of Rose Associates, a real estate management company and a donor to Weiner's campaign. "My support for Anthony is unwavering."

But some longtime supporters, alarmed by the continuing commotion, said they could no longer stomach his candidacy.

"The man needs to look himself in the mirror and say, 'Really?' " said Maryanne Adams, a donor to his campaign from New Hampshire, who said she had admired his outspoken support for overhauling health care. "Grow up."

Promoted
Listen to the latest songs, only on JioSaavn.com
She was already starting to talk about his campaign in the past tense. "It's too bad," she said. "So much talent wasted."

Nancy Pelosi: From Housewife To One Of The Most Powerful Women - 5 Points