Jonas Savimbi, known as the "black rooster", died in February 2002 during a clash with the army in central Angola. 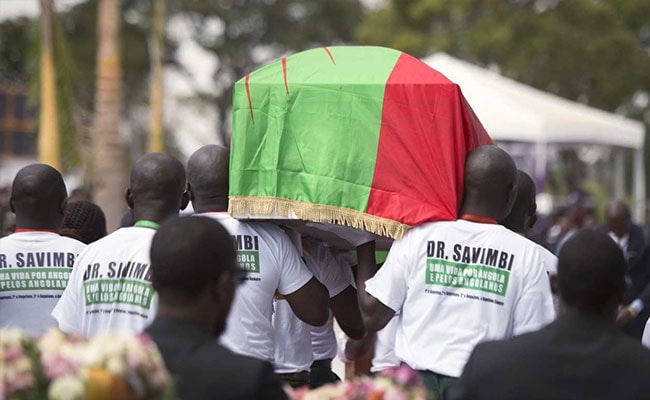 The ceremony was touted as a symbol of national reconciliation after decades of war.

Thousands of supporters of Angola's former rebel leader Jonas Savimbi rallied for his public reburial on Saturday, 17 years after he was killed by troops in a shootout that marked the end of the country's devastating civil war.

Wearing T-shirts printed with an image of Savimbi's face, supporters placed his coffin on a hexagonal monument designed by one of the guerrilla leader's sons in Savimbi's native village of Lopitanga. It was then buried in accordance with his wishes.

The ceremony was touted as a symbol of national reconciliation after decades of war.

Savimbi, known as the "black rooster", died in February 2002 during a clash with the army in central Angola.

Soldiers buried him there and his public funeral and reburial came after long negotiations between Angolan authorities and Savimbi's UNITA, now an opposition party.

"This moment should have happened 17 years ago," Raul Danda, vice-president of UNITA, told AFP.

A portrait of the charismatic but divisive rebel leader was placed before the coffin, which was drapped with UNITA's green and red flag.

"We have come to Lopitanga to pay homage and to confirm that we are here to continue your fight," said UNITA chief Isaias Samakuva.

"We bow before the defender of noble causes," he said.

Angola, a former Portuguese colony, became a Cold War battleground after independence in 1975 when the Marxist-Leninist People's Movement for the Liberation of Angola (MPLA) seized control.

The United States lined up behind Savimbi's National Union for the Total Independence of Angola (UNITA) rebels and the former Soviet Union and its allies like Cuba backed the MPLA.

At least half a million people died in the conflict for the vast, oil-rich southern African nation, which played out over more than a quarter of a century.

Early in 2002, soldiers pursued the 67-year-old Savimbi across the province of Moxico in central eastern Angola. On February 22, they caught up with him. He fought back but was soon killed.

His body was taken to the provincial capital Luena and hurriedly buried in a cemetery, with a cross of iron on the mound of red soil.

The public funeral is "an important sign of national reconciliation," said Raphael, one of Savimbi's 30 children. But no representative of the Angolan government was present at Saturday's ceremony. 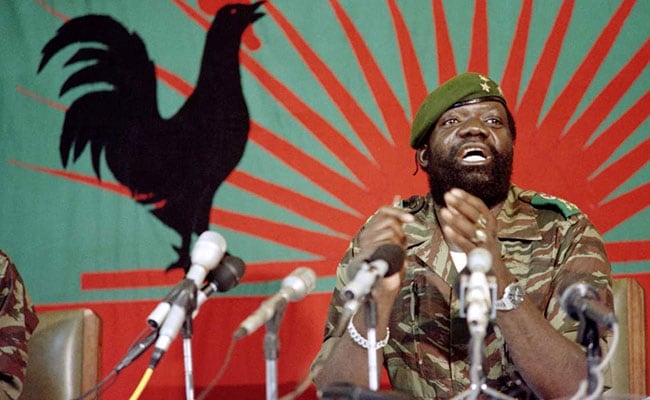 Early in 2002, Jonas Savimbi's body was taken to the provincial capital Luena and hurriedly buried in a cemetery, with a cross of iron on the mound of red soil.

After his death, the rival sides swiftly moved towards a ceasefire in a conflict that had lasted 27 years.

But his public funeral has rekindled the divisive debate over a man described as both charismatic and authoritarian.

"He fought for the interests of the people, we are here for one last farewell," said Jorge Kangajo, a driver at the ceremony.

In the capital Luanda, opinions were more divided.

Jonas Savimbi "made war and killed Angolans.... He does not deserve a dignified funeral," said a soldier, Adao Fortunato.

This year, after long talks, the MPLA government agreed with UNITA and the Savimbi family to hold a funeral in Lopitanga, where Savimbi's father is buried.

The deal was unlocked after President Jose Eduardo dos Santos, Savimbi's sworn enemy, stepped down in 2017 and was replaced by his defence minister, Joao Lourenco.

In August 2018, a commission was set up to organise the exhumation. The body was exhumed in January 2019. In May, DNA tests confirmed that the remains were those of the former UNITA leader.

Typically dressed in a green combat uniform, with a walking stick in his hand and a revolver on his hip, Savimbi led an army of more than 30,000 troops.

Backed for many years by apartheid South Africa, his forces were also accused of atrocities and he himself was described as having carried out summary executions.

Authoritarian and intransigent, Jonas Savimbi was also "very intelligent and very charismatic", according to Fred Bridgland, author of the biography "Jonas Savimbi: a Key to Africa".

"Savimbi betrayed his people, he ruined his movement because of his paranoia and his sexual appetite," he told AFP.

"He killed to eliminate people in his party, those whom they considered a threat (...), and he killed because of sexual jealousy."

Reports emerged of women who had dared to refuse his sexual advances being burned in public, along with their children.