Aircraft loses wheel while landing, no one hurt 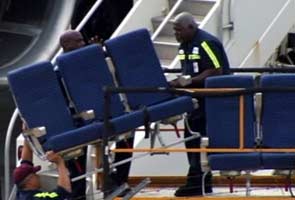 Vienna: A passenger aircraft with 80 people on board has landed safely despite losing a wheel after touching down in Vienna.

Austrian Airlines officials say the Bombardier aircraft lost one of two right-side wheels while landing on Monday afternoon. They say none of the 76 passengers or four crew members were hurt or in danger during landing.

The Vienna-bound flight originated from Florence, Italy. Other scheduled landings were delayed until the aircraft was removed from the runway.

The plane is being inspected for clues as to what caused the mishap.
Comments
aircraft