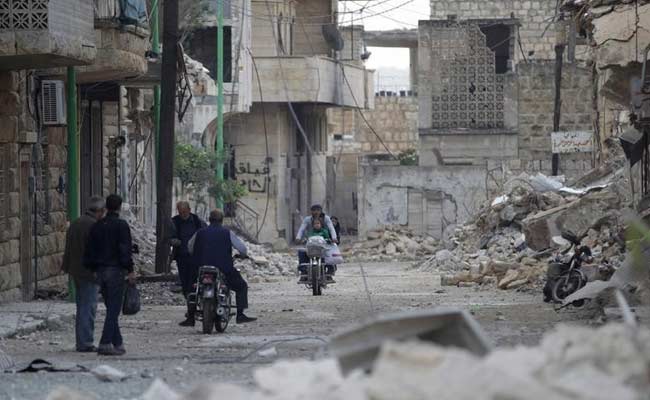 Civilians walk as others ride motorbikes past damaged buildings in the rebel-controlled area of Maaret al-Numan town in Idlib province, Syria October 29, 2015. (Reuters)

Beirut, Lebanon: As his family crammed alongside strangers into a small, exposed makeshift tent in Syria near the border with Turkey, Mohammed Musa slept outside in the mud through the first heavy rainfalls of autumn.

A week earlier the 24-year-old, his wife, child, parents and siblings fled their home in southern Aleppo province with just the clothes on their backs, after Russian warplanes and Syrian helicopters pounded their village in raids whose intensity they had never seen in four years of conflict.

He described the conditions in an interview with Reuters held via internet from a displaced people's camp in Idlib province. A local aid worker sent photos and videos from the camp.

The family joined the 120,000 Syrians who the United Nations says have been displaced in the four weeks since Moscow's air force joined the war on the side of ally President Bashar al-Assad.

The Russian strikes, which have supported ground offensives by the Syrian army and allies including Lebanese Hezbollah fighters and Iranian units, have mainly hit insurgents including foreign-backed groups in the west and northwest.

Musa and his family's squalid new living quarters a thin tarpaulin covering boggy earth in an open field show that, as with other military and political power plays in Syria, it is civilians who pay biggest the price.

"We have nothing, there's nothing to survive," Musa said.

The family of nine, who fled the village of Kufr Abid in the south of neighbouring Aleppo province, a rebel-held area, are sharing a tent with 15 other people. At night, the men camp out in the open so there is room inside for the women and children.

"It's very hard, there aren't enough tents so we're out in the open. There's a lot of rain and we're camping in the mud," Musa said.

"We don't know where we can go. We'll probably have to stay here for the winter, that's it. We don't know if we should try and head for Turkey or for Europe, or where. I really don't know, I still don't know," he said, sounding tired and hopeless.

The displacement camp consists of a collection of tents that were already housing Syrians who fled their homes earlier in the conflict. Several hundred families live there, an aid worker said. The numbers are increasing every day.

The United Nations says in October alone at least 120,000 Syrians in Aleppo, Idlib and Hama provinces were displaced by fresh fighting, adding to the total of well over 6 million people who are homeless inside the country.

More than 4 million others have fled abroad, mostly to neighbouring countries, while hundreds of thousands have been arriving in Europe.

Aid workers and residents say Russia's intervention, which began September 30, has brought some of the most intense bombardments since the conflict began.

"On the ground there is heavy, indiscriminate bombing by the Russians, and the bombs they're using are quite different. It's more like a carpet bombing," said Fadi al-Dairi of Hand In Hand for Syria, a UK-based group which delivers aid inside Syria.

"People are not sure about the Russian strategy here, so now they're heading in all different directions they're not sure which way to go, south, north, east civilians have no idea what to do," he said via telephone from Turkey.

Russia has denied reports that its bombing has resulted in civilian casualties. The defence ministry says it follows a strict policy of not mounting air strikes at all on populated areas. It says it makes painstaking efforts to select the right targets, and only gives the go-ahead for strikes when it has confirmed intelligence on the presence of terrorists.

"Civilian sites are in no way the targets of the Russian military operation," Russian Foreign Ministry spokeswoman Maria Zakharova told a news briefing in Moscow on Thursday.

The sharp increase in displaced people has stretched aid agencies, who are struggling to distribute tents to new arrivals. "It's well beyond capacity aid agencies are absolutely stretched. Most aid agencies don't have tents there are no tents in Turkey to buy at the moment," Dairi said.

Musa said the scale of Russian strikes had shocked residents in his and surrounding villages.

"We were surprised by the intensity of the bombardment the (Syrian) regime had struck our areas before, but much less than what's happening now. A plane or helicopter would come every few days, bomb, and then go back. But now there are intense bombings by the Russian planes and (Syrian) helicopter barrel bombs sometimes there are 10 planes striking at a time."

The United Nations reported the deaths of at least three children this month from the use of cluster bombs. Moscow has denied US allegations of the use in populated areas of such weapons, which scatter smaller bombs over a wide area and can pose a danger long after a strike from unexploded bomblets.

"The planes strike with cluster bombs. After the explosions, when you come back to the area, there are cluster bombs left over an area of maybe 100 square metres," Musa said.

A pro-opposition media activist in Aleppo province said two hospitals in the area where Musa's family fled had been hit.

"Air strikes targeted two of the main field hospitals in the southern countryside. There were some injuries all of them died," Yamen Khatib said, without giving figures. "Destroying them deprived the area of any medical facilities."

The Syrian Network for Human Rights monitoring group tallied more than 100 civilians killed in the first two weeks of the Russian campaign, which has since lasted twice as long.

The toll is expected to rise as fighting rages, particularly in Aleppo where offensives backed by Russian air cover continue, and fighting elsewhere against Islamic State has cut a main supply route.

"The family is poor. Even before we left life was hard, and with the war you didn't know when you might be killed," said Musa. "Things have only got worse since the Russian intervention."
© Thomson Reuters 2015