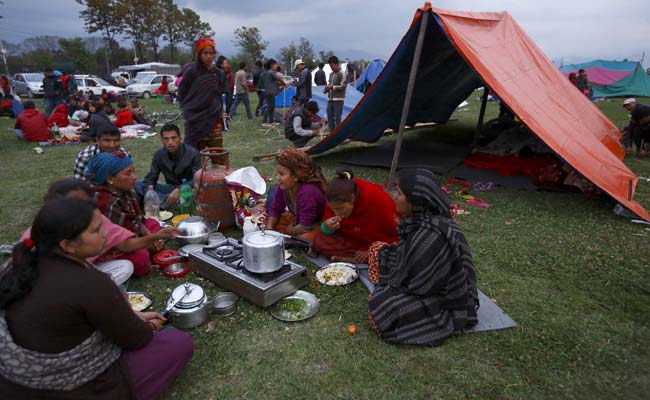 Kathmandu: With aftershocks spreading fear and thousands pitching tents out in the open in Kathmandu, too afraid to go into their homes already damaged by Saturday's powerful earthquake, fears have mounted of major food and water shortages.

Overwhelmed authorities struggle to cope with the disaster. "We are overwhelmed with rescue and assistance requests from all across the country," said Deepak Panda, a member of the country's disaster management.

Across Kathmandu and beyond, exhausted families whose homes were either flattened or at risk of collapse laid mattresses out on streets and erected tents to shelter from rain on Sunday.

People queued for water dispensed from the back of trucks, while the few stores still open had next to nothing on their shelves. Crowds jostled for medicine at one pharmacy. Long, serpentine queues could also been seen outside fuel stations.

The sun is out on Monday morning and a few more shops have opened, but the fear is unabated.

A total of 3,218 people were confirmed killed in the 7.9-magnitude quake, a police official said on Monday. Another 66 were killed across the border in India and at least another 20 in Tibet.

The toll in Nepal is likely to climb as rescuers struggle to reach remote regions in the impoverished, mountainous country of 28 million people and as bodies buried under rubble are recovered.

"The rescue workers are in a really bad shape. We are all about to collapse. We have worked two straight nights," said home ministry official Laxmi Prasad Dhakal.

With so many people staying out in the open with no power or water and downpours forecast, fears mounted of major food and water shortages. Across Nepal, hundreds of villages have been left to fend for themselves.

"There is no electricity, no water. Our main challenge and priority is to restore electricity and water," Dhakal said.

"The next big challenge is the supply of food. Shopkeepers are unable to go in and open their shops. So people are facing difficulty buying food." Several countries rushed to send aid and personnel.

A Pentagon spokesman said a US military aircraft with 70 personnel left the United States on Sunday and was due in Kathmandu on Monday. Australia, Britain and New Zealand said they were sending specialist urban search-and-rescue teams to Kathmandu at Nepal's request.

Britain, which believes several hundred of its nationals are in Nepal, was also delivering supplies and medics.

However, there has been little sign of international assistance on the ground so far, with some aid flights prevented from landing by aftershocks that closed Kathmandu's main airport several times on Sunday.

Nepal has only 2.1 physicians and 50 hospital beds for every 10,000 people, according to a 2011 World Health Organization report.

"The earthquake has exposed that Nepal's best public hospital infrastructure has crumbled at a time when it should serve more people in a hurry," said Sarvendra Moongla, a senior surgeon at Bir Hospital's Trauma Centre in Kathmandu, which opened in February.

Promoted
Listen to the latest songs, only on JioSaavn.com
At the Tribhuvan University Teaching Hospital, bodies, including that of a boy aged about seven, were heaped in a dark room. The stench of death was overpowering.