After Bitterly-Fought Campaign, Bangladesh To Vote On Sunday

Ten crore people will cast their vote to elect 300 members to Parliament for the 11th time since Bangladesh was born in 1971. 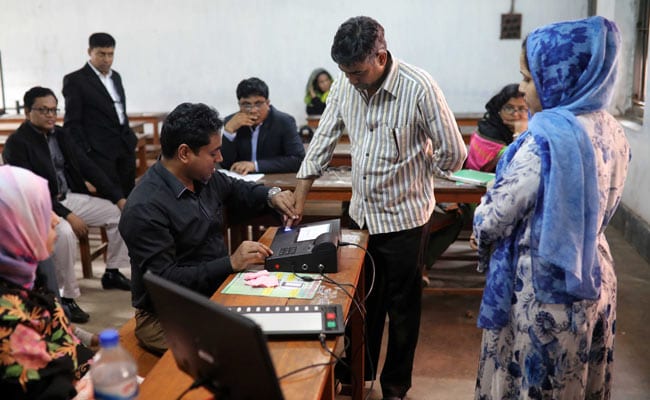 1800 candidates, more than 30 parties have high stakes in the polls. (Reuters)

Bangladesh is all set for a big fight on Sunday between the boat and the sheaf of paddy - symbols of the ruling Awami League and the opposition Bangladesh Nationalist Party, respectively.

Ten crore people will cast their vote to elect 300 members to Parliament for the 11th time since Bangladesh was born in 1971. With less than 48 hours to go, security forces - including the army - have fanned out across the country to ensure polls are free and fair.

Zahid Nur, college student and first time voter, said, "The most important thing is almost all parties are taking part in the elections this time. At the end of the day, they have come forward and this is going to be a participatory election, which is commendable."

Moushumi, another young voter said, "I think the 11th general election is the first and last election to show transparency and accountability and true democracy."

First time voters explain why this election is important for them. Unlike 2014, every political party is participating and a free, fair poll will stamp Bangladesh as a transparent, credible democracy, they say.

Nothing could be more important than that for Sheikh Hasina, the prime minister heading the Awami League-led alliance of eight parties.

Saber Hossain Chowdhury, senior leader of Awami League, said, "I hope the voters will be able to exercise their voting rights peacefully. If we can translate the support we have from the people into votes at the polling station, we hope to definitely win the election."

For opposition BNP, with its chief Khaleda Zia in jail, it's a fight to prove political relevance as it leads a 13-party opposition alliance, the Jatiya Oikya Front. Its face - 82-year-old jurist Kamal Hossain.

"My appeal to the people is you must be courageous. This (voting) is our right. This is how we show ownership of our country," Dr Hossain said.  "This country has 160 million people."

It has been a bitterly fought election campaign for 299 seats - one seat is not polling because of the death of a candidate.

1800 candidates, more than 30 parties have high stakes in the polls. Dozens of clashes have left scores of people injures. BNP claims thousands of its workers have been arrested and the Election Commission is not doing its job.

Awami League claims they have been attacked by BNP cadre. Several taped phone conversations have come into circulation in which BNP leaders are allegedly plotting with ISI operative to overthrow the Awami League government. The ruling party also has its troubles - allegations of corruption and almost 70 rebel candidates.

The army is out to ensure peaceful polling at some 40,000 polling stations. Polling will be through ballot papers except in a handful of constituencies. Results are expected on New Year's Eve.