Meanwhile, with Kabul airport remaining inoperable, the Afghans fearful of Taliban reprisals are trying to escape through the country's land borders. 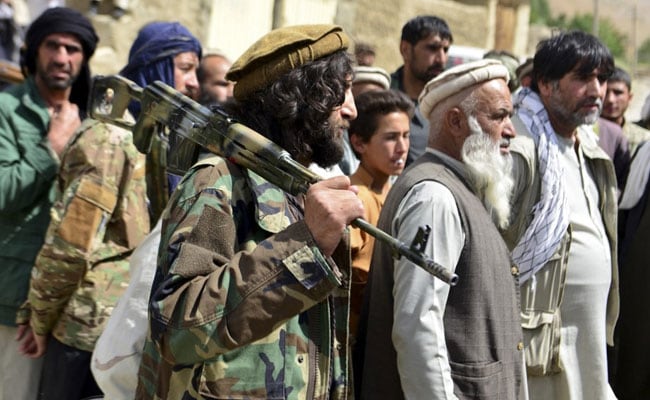 Panjshir has been the only province to hold out against Taliban since fall of Kabul on August 15. (File)

The Taliban has surrounded Panjshir, the only remaining province resisting its rule, a senior leader said Wednesday, as he called on the rebels to negotiate a peaceful settlement with them, reported Reuters. Panjshir has been the only province to hold out against Taliban since the fall of Kabul on August 15.

Meanwhile, with Kabul airport remaining inoperable, the Afghans fearful of Taliban reprisals are trying to escape through the country's land borders. An AFP report quotes a source as saying that a Qatari aircraft carrying a technical team has landed in Kabul to discuss resumption of airport operations.

US President Joe Biden on Tuesday defended his decision to pull troops out of Afghanistan, saying it was in the US national interest, reported AFP.

India, meanwhile, admitted for the first time on Tuesday to having held diplomatic talks with the Taliban. An Indian envoy met a key leader of the terrorist group in Doha, Qatar's capital.

Here are the updates on the Afghanistan crisis:

Appreciate Iran's facilitation of our repatriation flights from Afghanistan.

Former Joe Biden Interpreter Left Behind In Afghanistan, Pleads For Rescue: Report
An interpreter who helped rescue US President Joe Biden in a 2008 Afghan snowstorm is in hiding after failing to join the Kabul evacuation airlift, according to the Wall Street Journal.
Sep 01, 2021 20:39 (IST)
European Union must accept Afghan responsibilities: Parliament chief
The EU must stop shirking its responsibilities towards migrants, especially with the expected influx since the fall of Afghanistan to the Taliban, the European Parliament's president said on Wednesday. David Sassoli was speaking a day after European Union interior ministers meeting in Brussels said they were counting on Afghanistan's neighbours to keep refugees in the region so they did not flock to Europe.
"We cannot pretend that Afghanistan is not our business because we participated in that mission," he told a conference on the future of Europe at the annual strategic forum in Bled, Slovenia.
Europe needed to speak with one voice on foreign and security policy if it is to maintain credibility both at home and abroad, Sassoli said.
Sep 01, 2021 19:56 (IST)
Afghanistan Update: Taliban Approve Afghanistan's First Cricket Test Since Takeover
The Taliban have approved Afghanistan's first cricket Test since their takeover, raising hopes that international matches will continue as usual under the new rule of the Islamists, reported AFP. "We have got approval to send the team to Australia," chief executive of the Afghanistan Cricket Board Hamid Shinwari told AFP. During their first stint in power, before they were ousted in 2001, the Taliban banned most forms of entertainment -- including many sports -- and stadiums were used as public execution venues. The hardline Islamists do not mind cricket, however, and the game is popular among many of them. They have also promised to enforce a less strict version of Islamic law this time, after seizing the capital Kabul last month.
Sep 01, 2021 17:55 (IST)
Afghanistan Update: Qatar Jet Carrying Technical Team Lands In Kabul: Report
A Qatari aircraft landed in Kabul on Wednesday carrying a technical team to discuss resumption of airport operations after the Taliban takeover of Afghanistan, according to a source with knowledge of the matter, reported news agency AFP. "A Qatari jet carrying a technical team has landed in Kabul earlier today to discuss the resumption of operations in the airport," the source told AFP.
Sep 01, 2021 17:53 (IST)
Taliban Says It Has Surrounded Afghan Resistance Fighters, Calls For Peace
The Taliban has surrounded the only remaining province resisting its rule, a senior leader said on Wednesday, calling on rebels to negotiate a settlement with the group, reported Reuters. Since the fall of Kabul on August 15, mountainous Panjshir has been the only province to hold out against Taliban, although there has also been fighting in neighbouring Baghlan province between Taliban and local militia forces. In a recorded speech addressed to the Afghans in Panjshir, senior Taliban leader Amir Khan Motaqi called on the rebels to put down their weapons.
Sep 01, 2021 15:50 (IST)
Afghan Crisis Shows European Union Must Seek Greater Military Autonomy: Council Chief
The European Union must take action to be better prepared for military evacuations of its citizens in situations such as occurred in Afghanistan in recent weeks, EU Council President Charles Michel said on Wednesday, reported Reuter. "In my view, we do not need another such geopolitical event to grasp that the EU must strive for greater decision-making autonomy and greater capacity for action in the world," he told the Bled Strategic Forum in Slovenia. Western nations scrambling to get their citizens out of Kabul after the Taliban takeover were dependent on the US military to keep the airport running during airlifts.
Sep 01, 2021 15:04 (IST)
Afghanistan Central Bank Board Member Seeks Funds From US, IMF
A senior board member of Afghanistan's central bank is urging the US Treasury and the International Monetary Fund to take steps to provide the Taliban-led government limited access to the country's reserves or risk economic disaster. The US administration has said any central bank assets the Afghan government have in the US will not be made available to the Taliban, and the IMF has said the country will not have access to the lender's resources.
Sep 01, 2021 14:58 (IST)
Qatar Urges Taliban For 'Safe Passage' For People Leaving Afghanistan
Qatar on Wednesday urged the Taliban to ensure "safe passage" for those wanting to leave Afghanistan after the end of the US-led evacuations, reported AFP. "We stress on the Taliban the issue of freedom of movement and that there be safe passage for people to leave and enter if they so wish," Foreign Minister Sheikh Mohammed bin Abdulrahman al-Thani told a press conference after a meeting with his Dutch counterpart.
Sep 01, 2021 14:45 (IST)
Afghanistan Update: Dutch To Move Kabul Embassy To Qatar, Says Foreign Minister
The Netherlands will move its Kabul diplomatic mission to Qatar after the Taliban's takeover of Afghanistan, Foreign Minister Sigrid Kaag said Wednesday, following similar moves by the United States and Britain, reported AFP. "I've asked his excellency very kindly agree to the relocation of the Netherlands embassy from Kabul to Doha," Kaag told journalists after meeting her Qatari counterpart in Doha.
Sep 01, 2021 13:40 (IST)
Afghanistan Update: With Kabul Airport Closed, Fearful Afghans Scramble For Border
Crowds seeking to flee Afghanistan gathered on its borders while long queues formed at banks on Wednesday, as an administrative vacuum after the Taliban's takeover left foreign donors unsure how to respond to a looming humanitarian crisis, reported Reuters. With Kabul's airport inoperable, private efforts to help Afghans fearful of Taliban reprisals focus on arranging safe passage across the land-locked nation's borders with Iran, Pakistan and central Asian states. At Torkham, a major border crossing with Pakistan just to the east of the Khyber Pass, a Pakistani official said: "A large number of people are waiting on the Afghanistan side for the opening of the gate."
Sep 01, 2021 13:10 (IST)

UK Owes "Immense Debt" To Afghan Refugees, Says Boris Johnson
Prime Minister Boris Johnson on Wednesday said Britain owed "an immense debt" to Afghans who worked with NATO forces as he announced "vital support" for those resettling in the UK." Read here.
Sep 01, 2021 11:05 (IST)
Planeload of fleeing Afghans arrive in Mexico, including journalists
A plane carrying 175 Afghans fleeing their strife-torn homeland arrived in Mexico on Tuesday night on one of the last flights to leave Kabul on the day U.S. forces completed a withdrawal that left Taliban Islamist militants in control of Afghanistan.
It was the fourth group of Afghan civilians granted entry by Mexico on humanitarian grounds. A foreign ministry statement said the latest group to arrive included independent journalists and activists accompanied by their families, including 75 children.
Three previous flights from Afghanistan to Mexico over the past week included Afghan media workers from prominent U.S.-based newspapers.
A source with knowledge of the operation to evacuate Afghans deemed at risk following the Taliban take over told Reuters the latest group to arrive in Mexico included journalists from Afghan news outlets TOLO TV and Arman FM radio.
Sep 01, 2021 10:39 (IST)

Sep 01, 2021 09:56 (IST)
Britain In Talks With Taliban Over Safe Passage Of Remaining Nationals
Britain has opened talks with the Taliban over the "safe passage" of its remaining nationals and allies out of Afghanistan after the hardline Islamist group's quickfire takeover of the country last month.
The British government confirmed to AFP it has dispatched senior civil servant Simon Gass to meet with Taliban representatives in Doha.
Much of the group's senior leadership lived in exile in the Qatari capital until the overthrow of Afghanistan's Western-backed government after 20 years of war.
Prime Minister Boris Johnson has come under fire after many Afghans who helped NATO -- and are eligible to move to Britain -- were believed to have been left stranded in Afghanistan, where they are at the mercy of the Taliban.
Gass is "meeting with senior Taliban representatives to underline the importance of safe passage out of Afghanistan for British nationals, and those Afghans who have worked with us," a government spokesperson told AFP on Wednesday.
Sep 01, 2021 09:14 (IST)
Taliban Leader Who Met Indian Envoy In Doha Trained With Indian Army
The Taliban representative who met Ambassador Deepak Mittal, India's envoy in Qatar, on Tuesday in Doha, trained under the Indian Army at its elite institutions in the late 1970s and early 1980s. One of the seven persons who call the shots in the terrorist group that recently took over power in Afghanistan, Sher Mohammad Abbas Stanikzai is a key diplomat of the insurgent group.
This is the first time India has admitted to having made diplomatic contact with the Taliban.
Ambassador Mittal met Stanikzai, who is head of the Taliban's Political Office in Qatar, according to a press release from the Ministry of External Affairs. They met at the Indian Embassy in Doha, the statement said.
Stanikzai trained with the Indian Army between 1979 and 1982 -- three years in the Army Cadet College, Nowgaon, as a jawan and then as an officer at Indian Military Academy, Dehradun.
Sep 01, 2021 08:31 (IST)
Under India's Presidency, UN Security Council's Resolution on Afghanistan
The UN Security Council, under India's Presidency, adopted a strong resolution demanding that territory of Afghanistan not be used to threaten any country or shelter terrorists and that it expects the Taliban will adhere to commitments made by it regarding the safe and orderly departure from the country of Afghans and all foreign nationals. Read more 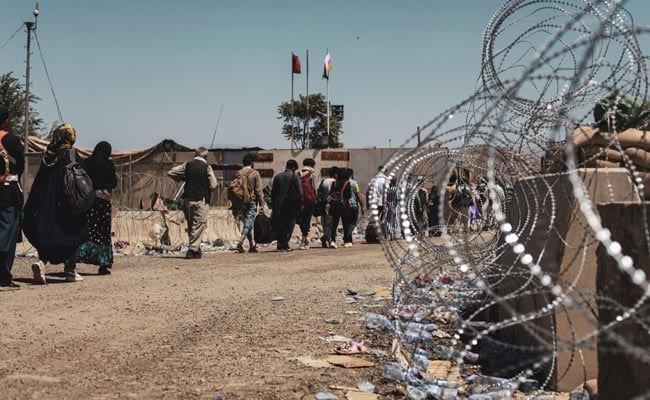 Sep 01, 2021 08:30 (IST)
Biden says Afghanistan exit marks the end of U.S nation-building
Facing sharp criticism over the tumultuous U.S. withdrawal from Afghanistan, President Joe Biden said on Tuesday it was the best available option to end both the United States' longest war and decades of fruitless efforts to remake other countries through military force.
Biden portrayed the chaotic exit as a logistical success that would have been just as messy even if it had been launched weeks earlier, while staying in the country would have required committing more American troops.
"I was not going to extend this forever war," he said in a speech from the White House.
Earlier in the day, the Taliban, which seized control of Afghanistan in a lightning advance this month, fired guns into the air and paraded coffins draped in U.S. and NATO flags as they celebrated their victory.
In his first remarks since the final pullout of U.S. forces on Monday, Biden said 5,500 Americans had been evacuated and that the United States had leverage over the Islamist militant group to ensure 100 to 200 others could also depart if they wanted to.
Sep 01, 2021 06:37 (IST)

One Of History's Biggest Airlifts: Biden Hails US Evacuation From Afghanistan
President Joe Biden called the US airlift of more than 120,000 people from Afghanistan an "extraordinary success" Tuesday, a day after the last US soldiers pulled out of the country.