The visit comes after Washington held major talks with Taliban officials in Qatar last month that negotiators hope could herald a breakthrough in the grinding 17-year conflict. 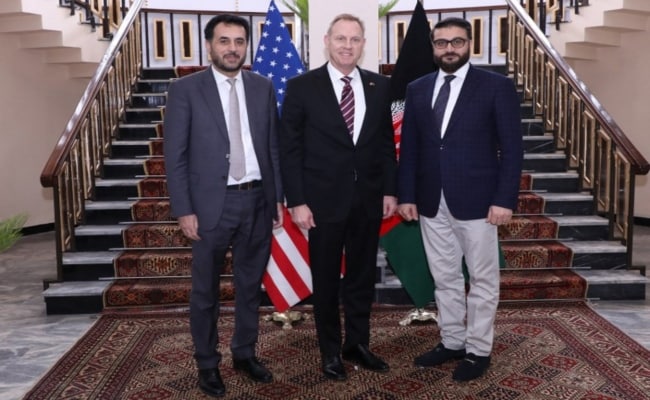 Acting Pentagon chief Patrick Shanahan made an unannounced visit to Afghanistan on Monday, where he met with President Ashraf Ghani as the United States leads a push for peace talks with the Taliban.

The visit comes after Washington held major talks with Taliban officials in Qatar last month that negotiators hope could herald a breakthrough in the grinding 17-year conflict.

US President Donald Trump is pushing to end US involvement in Afghanistan, where 14,000 American troops are still deployed -- raising Afghan fears that Washington could exit before securing a lasting peace between the Taliban and the Kabul government.

Shanahan told reporters earlier that he had no instructions from Washington to begin a withdrawal, however. "I have not been directed to step down our forces in Afghanistan," Shanahan said.

"I think the presence we want in Afghanistan is what assures our homeland defence and supports regional stability."

He said it was crucial Kabul, whose representatives were not at the talks in Qatar, was involved in discussions over the future of Afghanistan.

"The Afghans have to decide what Afghanistan looks like in the future. It's not about the US, it's about Afghanistan," Shanahan said.

Shanahan met General Scott Miller, the top US and NATO commander in Afghanistan, to discuss the situation on the ground before visiting Camp Morehead where Americans train Afghan special forces.

Later he sat down with Ghani, who has vented frustration at talks occurring without him about the future of Afghanistan and warned against rushing into a deal.

"Both sides said that the peace process and the fight against terrorism will continue, and the military and security alliance between Afghanistan and US will continue until peace is achieved," the president's palace said in a statement after Ghani's meeting with Shanahan.

Zalmay Khalilzad, the US special envoy leading the talks, has expressed hope of finding a deal before Afghan presidential elections scheduled for July, but has emphasised that any troop withdrawal would depend on conditions on the ground.

Khalilzad is set to lead a large delegation on a six-nation tour, including Afghanistan, to boost the peace process and seek to bring all Afghan parties to the table.

The months-long push by the US to engage the Taliban has ostensibly been aimed at convincing them to negotiate with Kabul, which the insurgents consider a US puppet.

Ghani spoke last week with US Secretary of State Mike Pompeo, who also stressed the importance of the Afghan government being at the centre of the peace process.

But the insurgents, who ruled Afghanistan from 1996-2001, have steadfastly refused.

Instead they met directly with US negotiators in Doha last month for peace talks described by US President Donald Trump as "constructive".

The US is expected to commence a second round of talks with Taliban officials on February 25 in Qatar, where they have their political office.

The militants, who were toppled by US-led forces in 2001, last week held separate talks in Moscow with a senior delegation of Afghan politicians -- including chief Ghani rivals.

The two-day talks were the Taliban's most significant engagement with Afghan leaders in years, and saw former president Hamid Karzai, among others, dining and praying with the insurgents -- though without the involvement of the government it was unclear what impact they will have.

Ghani described the Moscow talks as "nothing more than fantasy".

The Taliban have outlined their vision for Afghanistan, proposing an "inclusive Islamic system" of governance and demanding a new Islam-based constitution for the country.

Both parties released a statement at the conclusion of the talks promising to advance negotiations at a later date.

Shanahan was elevated from deputy defense secretary to the Pentagon's top spot January 1, after Jim Mattis quit amid long-running disagreements with President Trump.

His visit to Afghanistan comes as the United Nations said it was investigating "credible" reports of Afghan civilian deaths and injuries from an airstrike over the weekend in Helmand, a Taliban stronghold.

The UN Assistance Mission in Afghanistan (UNAMA) said late Sunday it would share its findings once an inquiry into the "aerial operations" in Sangin district was completed.

The Taliban are responsible for about half of civilian casualties, with the remaining deaths attributed to the Islamic State group and coalition strikes, according to a UNAMA report.

But airstrikes have stepped up and the UN has warned civilians continue to pay a disproportionate price in the fighting.

The US dropped 7,362 weapons during airstrikes in 2018 in Afghanistan -- approaching double the number of 2017, US Air Forces Central Command figures show.