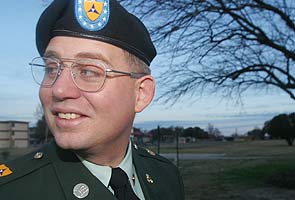 Washington: The convicted ringleader of US military guards who abused detainees at Abu Ghraib and took scandalous pictures of their acts was released on parole from military prison on Saturday, the US Army said.

Charles Graner, 42, was freed from the US Disciplinary Barracks at Fort Leavenworth, Kansas - the army's only maximum security prison - after serving over six and a half years of a 10-year sentence, spokeswoman Rebecca Steed said.

He was released early for good conduct and through work rehabilitation programs under US military rules, Steed said.

He will be supervised by a probation officer until December 25, 2014. But his destination was unknown and the army declined to provide further details about his release.

Graner led a six-member team of prison guards who sexually humiliated naked prisoners at the Abu Ghraib prison outside Baghdad in a scandal that dealt a severe blow to US reputation after it came to light in 2004.

Photographs taken by the guards and obtained by the media provided a graphic record of the acts of physical, psychological and sexual abuse, sparking international outrage.

The scandal brought scrutiny to US military interrogation techniques that critics charged were imported from the US "war on terror" prison at Guantanamo Bay, Cuba, and Afghanistan.

In some of the photographs, US soldiers grinned as they posed next to detainees held on a leash or stacked in a pyramid. Others showed the detainees forced into stress positions, their heads covered in a black hood, or being threatened by attack dogs.

Graner, a former US Army Reserve lance corporal, said he was following the orders of military intelligence officers to break down the prisoners, suspected Iraqi insurgents. He was charged with abusing detainees in 2004, along with six other members of 372nd Military Police Company based in Maryland.

His former fiancee, fellow guard Lynndie England, served a three-year sentence for her role in the abuse.

In all, seven guards and four other low-ranking officers were convicted of various crimes related to Abu Ghraib.

Promoted
Listen to the latest songs, only on JioSaavn.com
Graner was the last member of the Abu Ghraib defendants to be released.