Someone's Leaping Off D.C. Skyscraper. Is It A 68-Year-Old Grandfather?

Suddenly, a person enters the frame, leaping from the top of the skyscraper-like a cliff diver. 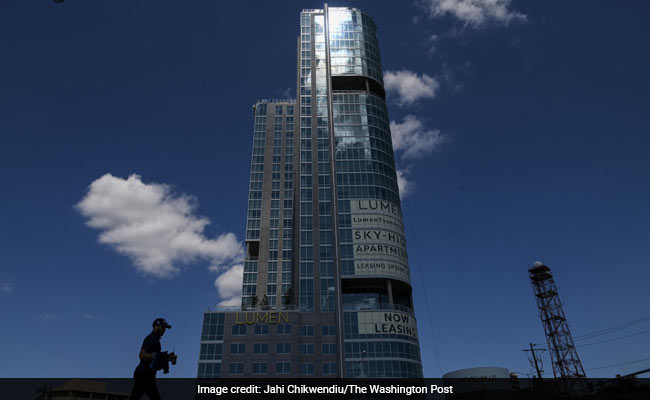 Multiple people have climbed and leaped off some of the Washington area's tallest buildings.

From 32 stories up, evening traffic in suburban Tysons, Virginia, looks like Matchbox cars being pushed around a plastic track on the grainy video. Suddenly, a person enters the frame, leaping from the top of the skyscraper-like a cliff diver.

Seconds pass as the body arcs downward, hurtling faster and faster toward asphalt and oblivious commuters headed to late meetings, dinner or soccer practice. When disaster seems all but imminent, a parachute explodes open with a crack like a gunshot and the jumper swoops over the cars to safety.

Again and again, perhaps six times in all over the past year, multiple people have climbed and leaped off some of the Washington area's tallest buildings, turning this land of anodyne office parks, corporate headquarters and soul-deadening gridlock into an unlikely venue for one of the world's riskiest sports, BASE jumping. Authorities say the danger is high, as a tangled chute or errant landing could injure the jumpers or someone below.

The identities of the perpetrators are unknown, but in recent months one suspect has emerged who seems, at first glance, as improbable as the location of the jumps themselves: a 68-year-old grandfather.

BASE jumping is not a crime in Virginia, but Fairfax County police had been investigating a home contractor from Sterling for possible misdemeanor trespassing in connection with the jumps in Tysons, according to a search warrant. Authorities say they developed evidence that Chuck Moeser appears linked to one of the jumps, but the one-year statute of limitations expired as they built their case.

That leaves a mystery. Is a man who quietly spends his days hammering together decks, laying patios and roofing homes in Northern Virginia also surreptitiously scaling its skyline at night?

If Moeser is involved, he's not saying. He did not respond to numerous requests for comment and posted a message on Facebook urging his family and friends not to speak to a reporter about him. "Why would anyone want to read a story about me . . . boring," he wrote.

But if he is, it would be a stomach-churning second act for an athlete who was once an elite local runner known as much for his fierce endurance late into life as his brash, flamboyant style.

Moeser cruised to age-class victories and top 10 finishes in races such as the Army Ten-Miler and the Marine Corps Marathon in the '80s, '90s and early 2000s, edging out even Olympic marathon champion Frank Shorter and four-time New York City Marathon winner Bill Rodgers in a 1995 race.

He was known for a signature look - running shirtless even in the dead of winter. He told media outlets it was a tactic to intimidate other runners who did not share his six-pack physique. It's a form he maintains even now.

Stories about Moeser abound on local running forums, where fact seems to bleed into fiction. Moeser used to pound nails into his arms before marathons to deaden the pain, one post reads. Another reports a "legend" that Moeser carried his son out of the Grand Canyon after his son injured his leg during a run.

"He was legendary," said Ron Kulik, Moeser's competitor and running partner in the '90s. "It's like Wyatt Earp. Is the legend of Wyatt Earp true or not? The answer is yes. How much? You really have to dig."

People phoned Fairfax County police to say they had seen someone jumping - or maybe paragliding - off buildings in the Tysons area. The action centered around the Lumen building, a luxury apartment complex that was then under construction.

The Greensboro Metro station, with its trains and electrified tracks, and a car dealership are adjacent. A water tower, telephone polls and trees poke up from below. In short, it's one of Northern Virginia's busier crossroads.

During one of the jumps in August 2018, the company that was building the Lumen reported that someone had scaled a fence around the project and clambered up a tower crane before plunging off the top of the 32-story structure.

"In this case, the seemingly dangerous activity of BASE jumping was accomplished by trespassing on private property - a class 1 misdemeanor punishable by up to 1 year in jail and up to $2,500 in fines," Second Lt. John Lieb of the Fairfax County police said in an email.

The jumps burst into public view in March, when Fox 5 aired dramatic videos made by the jumpers that the news station said were sent to them by a "concerned citizen."

The person told Fox 5 that the jumpers had initially posted photos and videos of the jumps on Facebook. None aired shows the jumpers' faces.

"Three, two, one . . . cupcake!" a jumper yells in one video, before plunging into the dusk toward the Tysons lights below. A jumper sails between two high-rises, like the walls of a canyon, in another clip. A third video shows a jumper landing on a roadway while in a fourth, a man's parachute brushes a car in a darkened parking lot as he lands.

"Sorry, didn't mean to wake you up!" the jumper yells to an apparently startled driver.

The low-slung Washington area has not been a major hot spot for BASE jumping, which is more commonly associated with towering peaks and spans out West and in Europe.

The sport first gained notoriety in the 1970s. BASE is an acronym that stands for the four types of objects jumpers typically launch from: building, antenna, span and Earth. Jumpers often attempt to complete jumps from each type of platform.

The sport has remained largely underground because of its danger and the fact that jumpers are often required to trespass, burgle or pick locks to access launch points. One study found BASE jumping is five to eight times more dangerous than skydiving. An online magazine maintains a list of fatalities in the sport. It numbers 377.

After the Fox 5 report, Fairfax County police received photos and videos of the jumps, which prompted a probe. An investigator wrote in a search warrant for the contents of Moeser's Facebook page that one of the photos showed two men atop a building that he was later able to determine, based on landmarks in the shot, was the Lumen. Fairfax police said one other building was also the site of BASE jumps but declined to identify it.

One man in the photo matched Moeser's driver's license image, the investigator wrote in the search warrant. The man also wore a "USNA Parachute Team" shirt, the same type of shirt the investigator discovered Moeser wearing in a separate photo on his Facebook page.

The investigator noted that a jump was reported on June 8, 2018, the same day Moeser posted on Facebook a grinning picture of himself wearing a large backpack atop what police said was the Lumen building.

The caption reads: "born to b wild."

Friends said Moeser turned to BASE jumping in his mid-50s, an age when many others have given up extreme sports.

A 2017 article in Outside magazine featured Moeser and his daughter, who performed a tandem BASE jump from West Virginia's New River Gorge Bridge during a festival where it is legal to jump for a handful of hours each year. Moeser's son also made the 876-foot leap.

Tyler Naiman, a skydiver who has sky-dived and BASE jumped with Moeser, said the latter sport's thin margin of error is in keeping with Moeser's personality. He recalled that he and Moeser would often wait until other skydivers had pulled their rip cords during a jump before pulling their own.

"Everyone would leave, and we would party down to the basement," Naiman said. "We would push it to the limit. His personality is he goes to the limit."

When it came to the Tysons jumps, Naiman grew quiet. He said BASE jumpers maintain a code of silence to avoid legal trouble and, as they put it, to protect jump locations from getting "burned." More than a dozen other BASE jumpers who are local or associated with Moeser declined to comment or did not respond to messages.

Moeser told The Washington Post in 1987 that as a young man he was drafted into the Army, where military records show he received training as a Ranger, parachutist and military skier in the early 1970s.

He told The Post he was "pretty wild" in high school in Northern Virginia and often hit the Georgetown pub circuit.

"That was probably the best thing that ever happened to me," Moeser told The Post of being drafted. "I'd have either been the president of a company or in jail by now. I had a lot of extra energy. That's probably the reason I run so much now."

Kulik, Moeser's former running partner, said he would regularly meet Moeser at his contracting jobs during lunch. Moeser, who had spent the morning hauling 70-pound bales of shingles up on a roof or doing other heavy labor, would rip off his work pants, don sneakers and then bang out a speedy 10 miles with Kulik. Then Moeser would head back to work, Kulik said.

"Guys who were Olympic qualifiers - none of these guys could do what he did during the day," Kulik said.

Moeser retired from racing in 2005, but the Facebook feed of the sexagenarian continues to look like an REI commercial. In one post, he celebrates completing his 919th skydive. In another, he shouts "Three, two, one, cupcake!" - the same phrase heard in the Tysons videos - before plunging hundreds of feet off a bridge in a BASE jump. In a third, he frolics naked in a Shenandoah waterfall.

Larry Deigh, another friend, said Moeser is close with his children and wife and has become a gregarious teacher within the Reston (Virginia) Bike Club, where he leads long weekend rides.

"He is somebody who gets a lot of pleasure in coaching people and being a leader in terms of organizing hiking and biking trips," Deigh said.

Fairfax County police said the reports of Tysons jumps continued through last summer and into this year. During that period, Moeser made a number of posts about Tysons on Facebook.

In June 2018, he posted a photo of a parachute and wrote, "Time to open tysons again." In July 2018, Moeser posted about a "Mission: Impossible" movie that features high altitude skydiving and then wrote "I'm heading to tysons corner to my favorite 420' bldng for some afternoon delight."

Police said the investigation into the jumps is now inactive. The photos and videos they received of the jumps are stripped of metadata, so it's hard to pinpoint exactly when they were taken.

The last documented jump happened in May, police said. On a Wednesday in late July, a new photo appeared on Moeser's Facebook page of a person fluttering to the ground with a parachute. There is an office building in the background.

It's unclear where the photo was taken; the caption reads simply: "Just another hump day."

(Except for the headline, this story has not been edited by NDTV staff and is published from a syndicated feed.)
Comments
WashingtonUnited Statesparachute diving