A 66-Million-Year-Old Skull Could Unlock Secrets About Triceratops

It is hoped most if not all of the dinosaur's full skeleton will be recovered. 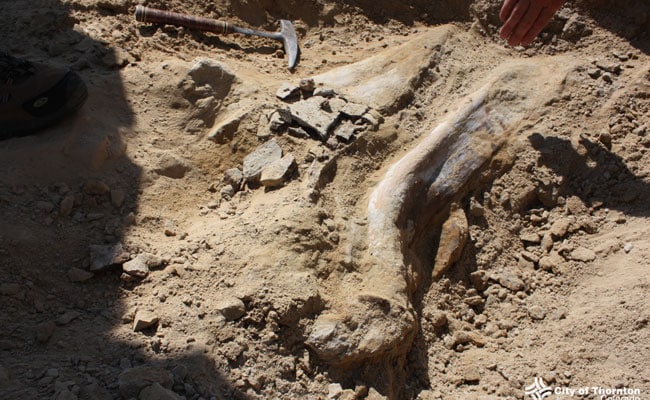 Like a modern-day rhinoceros, Triceratops probably spent much of its time grazing on plant matter. (AFP)

There's more excitement than usual at Marco's Pizza in Thornton, Colorado, since news spread Tuesday that a rare dinosaur fossil was unearthed at a construction site up the street.

General Manager Daniel Perez, 24, who's lived in the Denver suburbs all his life, called the discovery "one of the biggest, most exciting things" he's ever experienced. So exciting, in fact, he is considering donating some pies to the researchers and security crews working at the site, hopeful they will reciprocate by offering a sneak peek at what paleontologists say is a 66-million-year-old adult triceratops.

"Whatever we can get," Perez told The Washington Post on Wednesday, "we'll take it."

It appears to be a comprehensive find, said Todd Barnes, Thornton's communications director. It is hoped most if not all of the dinosaur's full skeleton will be recovered.

Already, the dinosaur's horns and its shoulder bones have been located.

The discovery was made Friday on a patch of Earth that's mostly loose sand, which should facilitate a relatively swift excavation, officials say. Eventually, the property will house a new facility for Thornton's police and fire departments. 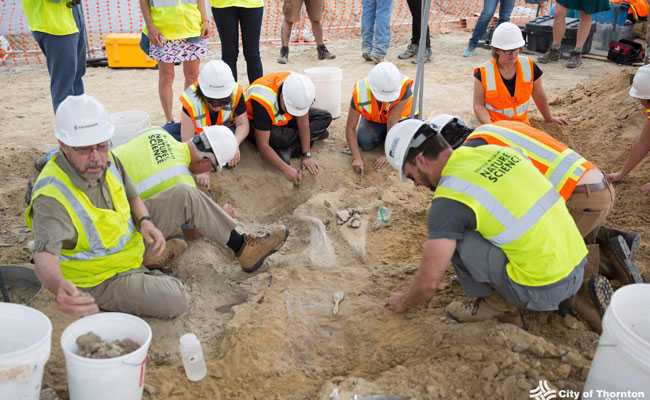 Scientists working on the site of a newly discovered skeleton and skull of a triceratops dinosaur in the city of Thornton in the western US state of Colorado. (AFP)

Things were kept quiet, at first, because city officials worried the news might attract thieves or vandals, Barnes said.

"We scurried over the weekend to get security in place," he told The Post, "to make sure no one can take bones or damage them."

The site is now patrolled by security around the clock, Barnes said.

It's believed most triceratops weighed upward of six tons, and stood about 10 feet tall and 30 feet long, according to a National Geographic fact sheet. Scientists believe the herbivores moved slowly, making them easy prey for larger meat eaters, especially the giant Tyrannosaurus rex.

"Like a modern-day rhinoceros, Triceratops probably spent much of its time grazing on plant matter. It used its beaklike mouth and powerful jaws lined with rows of sharp cheek teeth to shred and grind cycads, ferns, and other low-lying vegetation. Triceratops's head was its most imposing feature. It measured 4 to 5 feet across and was ornamented with impressive horns and a head plate. It used its horns - a short one above its mouth and two long ones above its eyes - to charge predators, such as T. rex. They likely were also used in mating rituals."

This one is unique, though.

During a Facebook Live broadcast from the discovery site, Joe Sertich, dinosaur curator at the Denver Museum of Nature and Science, explained that, as with other triceratops located in the Denver area, this one appears to be about half the size of those that lived farther north, in the Dakotas and Montana.

"We don't really know why," he added. "Even though we have hundreds of triceratops from the American West, we only have three good skulls. And this might be one of the best skeletons to tell us why Denver triceratops are smaller than all of their cousins everywhere else."

The bones found in Thornton also appear to be disaggregated, Sertich said. So this triceratops, he surmised, may have died and laid on the ground for a few days or weeks.

"The bones fell apart, the flesh fell apart," he said. "Things like T-rex would've come and taken bites out it."

That means, they could locate T-rex teeth as well, potentially unlocking new clues about the fearsome carnivores also.

Once the bones are fully uncovered, they'll be wrapped in a protective cast to prevent them from breaking. And when completely excavated, the fossils will be sent to the museum for clean up, assembly and display.

Sertich has praised the construction crew that made the find. Too often, it's unclear to the untrained eye the magnitude of what's been found, so workers just carry on with the task at hand, destroying or building over important history in the process.

Promoted
Listen to the latest songs, only on JioSaavn.com
"They knew what they found the moment they hit it," he said. "They stopped what they were doing, they recognized it as a significant and really important fossil. And they called the right people."