"It feels great," 97-year-old American Tom Rice said after landing to rapturous applause in a field near the French village of Carentan where he flashed the V sign. "I want to go back up and do it again!"

Veteran paratroopers who served during the D-Day landings of 1994 aimed high once more on Wednesday, repeating their feat and forgetting their age to mark the 75th anniversary of the Normandy invasion.

"It feels great," 97-year-old American Tom Rice said after landing to rapturous applause in a field near the French village of Carentan where he flashed the V sign. "I want to go back up and do it again!"

Rice, a former member of the US Army's "Screaming Eagles" 101st Airborne Division, waved a giant American flag as he descended, strapped to a parachutist who controlled their tandem jump.

His division was tasked with securing the muddy routes around the village of Carentan, at the intersection of the Utah and Omaha beaches where Allied forces would land at daybreak. 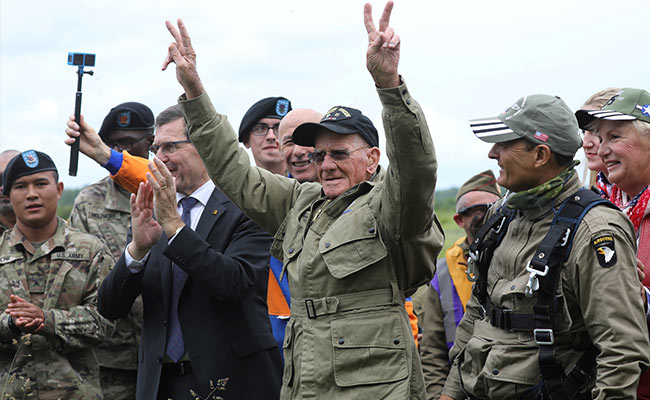 US WWII veteran Tom Rice (C) reacts next to Mayor of Carentan Jean-Pierre Lhonneur (L) after taking part in a parachute drop over in France.

They eventually succeeded with their mission, but for years after the war Rice, who later became a history teacher in California, worried that the local French would resent the men who helped destroy their towns and homes in trying to defeat the Germans.

"All the veterans say that: 'We destroyed your country'," said Mayor Jean-Pierre Lhonneur of Carentan. "They're very surprised when we welcome them with open arms."

"This is more enjoyable that you can ever imagine," Rice said.

"They answered the call"

Later on Wednesday thousands of people hoping to see two British D-Day parachutists repeat their feat ringed a green field of wheat outside Sannerville, where British forces converged in the 1994 landings.

Harry Read, 95, and Jock Hutton, 94, were to jump alongside 200 British and French parachutists from the same Dakota planes which dropped thousands of British soldiers on the Normandy coast.

But British military officials said technical problems had prevented his plane from taking off, postponing their jump until later this week.

"This is a special year. It's not just about honouring the guys who jumped, but what they stood for," said Ned, a former British soldier watching outside the drop zone, who will be making his own commemorative jump this week.

Jordan Hayes, a 25-year-old corporal in Britain's 16 Air Assault Brigade who made the jump Wednesday, let people test the weight of his parachute gear as he was swarmed by well-wishers seeking selfies.

"I'd ask how he felt," Hayes said of not getting the chance to meet Read.

"I know what I feel like, even when I'm not going into battle -- it's nerve-wracking. Some of them were 16-year-old kids," he said.

"They took on a responsibility to fix a problem that wasn't theirs, but they answered the call," said Kyle Martin, 30, who was watching alongside his wife Emilee.

They had travelled from Connecticut -- it was Kyle's first time on a plane -- to see as many Normandy sites and ceremonies as they could.

"This is where we said, 'we can do this and we can take care of it with our allies'," Martin said.

(Except for the headline, this story has not been edited by NDTV staff and is published from a syndicated feed.)
Comments
D-day anniversaryFrance