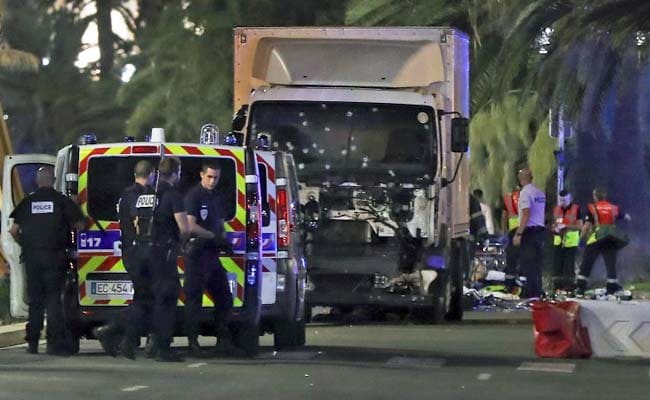 The Nice attacker, named as Mohamed Lahouaiej Bouhlel, was not on the watch list of French intel services

A truck rammed into a crowd celebrating Bastille Day in the French Riviera city of Nice on Thursday night, killing at least 84 people in an apparent terrorist attack in which the driver also opened fire on revelers before being shot dead by police.

The truck struck the crowd after a fireworks display for the French national day on the Promenade des Anglais, a seaside walk in this southern French city. Interior Minister Bernard Cazeneuve announced early Friday that in addition to the dead, another 18 people were in critical condition.

The victims included a vacationing father and son from Lakeway, Texas.

In the aftermath of the attack, the large white truck remained on the palm-lined boulevard, its screen riddled with bullets, according to photos from the scene.

Witnesses described total chaos, with the crackle of gunfire and people screaming as they fled the scene. Graphic video and photographs flooding social media showed the bodies strewn for a mile along the boulevard where the truck plowed into the crowd. Revelers ran while sirens blared.

France has declared three days of mourning beginning Saturday and flags will fly at half-mast.

Christian Estrosi, a former mayor of Nice and currently president of the Regional Council of Provence-Alpes-Cote d'Azur, told French television channel BFM TV that "the driver fired on the crowd" and his behavior appeared to be "completely premeditated." He said more than 10 children were killed in the attack.

In a series of Twitter messages, he added that the truck was carrying arms and explosives when it struck the crowd about 10:30 p.m. local time. 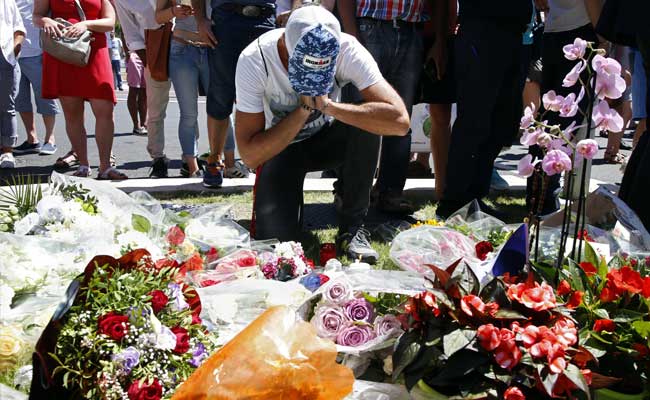 Flowers bouquets can be seen at the attack site in Nice, France.

The attack was the latest in a string of horrific incidents that have unfolded across Europe in the past 18 months. In March, Islamic State attackers killed 32 people in suicide bombings at the Brussels airport and a metro station.

France was rocked by a devastating terrorist attack in November, when heavily armed suicide bombers killed 130 people in several places around Paris. The Islamic State asserted responsibility for that attack, the worst bloodshed on French soil since World War II.

A police source confirmed to Reuters the suspect was a 31-year-old French-Tunisian man born in Tunisia who was known to French police for committing common crimes but was not known to outside intelligence sources. This confirmation comes after authorities said they found identification papers in the truck, along with "guns" and "larger weapons," Agence France-Presse reported.

In an address early Friday morning, President Francois Hollande condemned the "attack whose terrorist nature cannot be denied." He announced that France would ramp up its military efforts in Syria and Iraq and that the country's state of emergency, which had been imposed after Islamist militants killed 130 people in Paris last November, would be extended three months.

"All of France is under the threat of Islamic terrorism," said Hollande, who returned to Paris to deal with the crisis after a private visit to Avignon, France.

"She [France] is strong. She will always be stronger, I assure you, than the fanatics that want to attack her today."

The nearby city of Marseille, one of France's largest, cancelled its own fireworks display in response to the attack.

In Washington, President Barack Obama released a statement Thursday night condemning the attack and said he had directed his team to get in touch with French officials to assist with the investigation.

"We stand in solidarity and partnership with France, our oldest ally, as they respond to and recover from this attack," the statement said.

From Moscow, Secretary of State John F. Kerry and his Russian counterpart Sergei Lavrov said the attack underscored the need to end the violence in Syria. The United States is proposing greater intelligence coordination with Russia on Syria.

"The problem," a solemn Kerry told Lavrov, "is you and I and other foreign ministers are doing this now on almost a weekly basis. And nowhere is there a greater hotbed or incubator for these terrorists than in Syria."

The Associated Press quoted Wassim Bouhlel, a Nice native, as saying that after slamming into the crowd, the truck driver emerged with a gun and started shooting.

"There was carnage on the road," Bouhlel said. "Bodies everywhere."

There was no immediate assertion of responsibility for the bloodshed, although jihadist networks were celebrating it on social media.

The Islamic State has previously called for attacks using vehicles, according to the SITE Intelligence Group, which monitors extremist statements. It said supporters of the radical Islamist organization, also known as ISIS or ISIL, were sharing the news of the Nice attack and "celebrating the massacre."

Pro-Islamic State forums posted old messages in which the terrorist group urged followers to carry out lone-wolf attacks against France.
Police said people in the vicinity should stay home and follow instructions from authorities.
Police urged people not to spread rumors or broadcast shocking videos of the scene.

A reporter for Agence France-Presse called it "absolute chaos."

"We saw people hit and bits of debris flying around," he said.

Republican presidential candidate Donald Trump quickly took to Twitter, writing: "Another horrific attack, this time in Nice, France. Many dead and injured. When will we learn? It is only getting worse."

In a subsequent tweet, Trump said he was postponing a news conference scheduled for Friday "concerning my Vice Presidential announcement."

Within half an hour of initial reports of the incident, Facebook had activated its "safety check" feature for people in Nice. On Twitter, others used the hashtag #PortesOuvertesNice ("OpenDoorsNice") to find and offer refuge to those who needed a place to stay.

Meanwhile, taxis in the city were providing free rides to people seeking to leave the scene.

The attack came on one of France's most treasured holidays, the anniversary of the storming of the Bastille on July 14, 1789. In Paris, the occasion is marked by a military parade down the Champs-Elysees, the oldest and largest regularly scheduled military parade in Europe.

On Nice's Promenade des Anglais, which skirts the Mediterranean coast where thousands of revelers had gathered to watch a fireworks display, music mixed with the sounds of laughter and the crackle of fireworks for most of the night.

Then gunshots were fired into the crowd.

Maryam Violet, an Iranian journalist visiting Nice on vacation, told the Guardian that she saw the truck running into people as they left the fireworks show.

"I was walking for nearly a mile, and there were dead bodies all over the place," she continued.

Violet said she saw bodies covered in blue sheets and families mourning loved ones - two sisters and a brother from Poland who had lost two siblings; a family whose mother had died. She guessed that the family was Muslim, because some members were wearing headscarves.

"In Arabic, they were saying she's a martyr," Violet said.

"People were celebrating" before the incident, she said. "It was right after the fireworks that the truck came and ran over people."

Zeynep Akar, who had watched the fireworks from her balcony, told CNN that the truck drove into crowds right outside her home.

"I suddenly heard the crash and people shouting," she said. "When I went to the balcony, there were so many people on the ground."

When she heard the crack of gunfire, she hurried back inside her house and turned off the lights. "I didn't know what was going on," she said.

As everyone who could sought shelter, only emergency responders and relatives of those killed remained at the scene.

Photos showed horror-stricken mourners crouched over blanket-covered bodies. A Reuters photographer captured a small figure covered in a foil sheet; a child's doll lay next to the body.

Among the dead were two Americans: Sean Copeland, 50, and his 11-year-old son Brodie from Lakeway, Texas, just outside of Austin. The two were vacationing around Europe together on a trip that began in Pamplona and through Barcelona.

They had stopped in Nice to celebrate Bastille Day.

"We are heartbroken and in shock over the loss of Brodie Copeland, an amazing son and brother who lit up our lives, and Sean Copeland, a wonderful husband and father," the family said in a statement released by family friend Jess Davis which was obtained by the Austin-American Statesmen. "They are so loved ... it was a terrible loss."