5 Things You Should Know About The Paris Climate Agreement 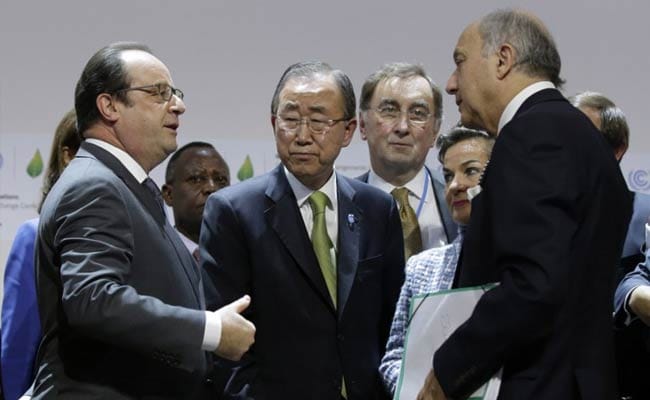 Negotiators in Paris just approved a climate accord to curb the rapid growth of greenhouse gases and prevent a dangerous warming of the planet. Here are the main elements, based on the latest text:

How countries will get there: The countries that sign the agreement pledge to "reach global peaking of greenhouse gas emissions as soon as possible," but the text doesn't specify a date. It says the parties to the pact will "undertake rapid reductions thereafter in accordance with best available science, so as to achieve a balance between anthropogenic emissions by sources and removals by sinks of greenhouse gases in the second half of this century."

This doesn't mean emissions would go to zero. It means they would go low enough that they could be offset by natural processes or advanced technologies that are able to remove greenhouse gases from the air.

The next steps: The text pledges all countries to delivering, every five years, a new national pledge to reduce emissions. Each pledge, it says, should represent a "progression" over the prior one, and should reflect the country's "highest possible ambition." Climate watchers see this process as crucial, because current country pledges aren't strong enough to limit warming to below 2 degrees C much less 1.5 degrees C.

Adapting to the changes that are already coming: The text also states that countries will "engage in adaptation planning processes" to ensure that they're ready for the effects of climate change. For impacts that cannot be adapted to, the proposed accord contains a "loss and damage" section, suggesting that these cases will be addressed through a variety of means including "risk insurance facilities, climate risk pooling and other insurance solutions." This provision is another key win for small island states and other developing, vulnerable nations.

Who pays? The long-contested section on climate finance now says that developed countries, like the U.S., "shall provide financial resources to assist developing country Parties with respect to both mitigation and adaptation" - in other words, helping them brace for impacts but also to transition to cleaner energy systems. The suggests, though, that wealthier developing countries can also contribute such funds if they would like. Developed countries would have to communicate about their climate donations every two years.