41 Dead Animals Found Inside A 'Closed For Maintenance' Pet Store

The Macomb, Illinois, pet store was closed for maintenance, according to a sign on its front door. 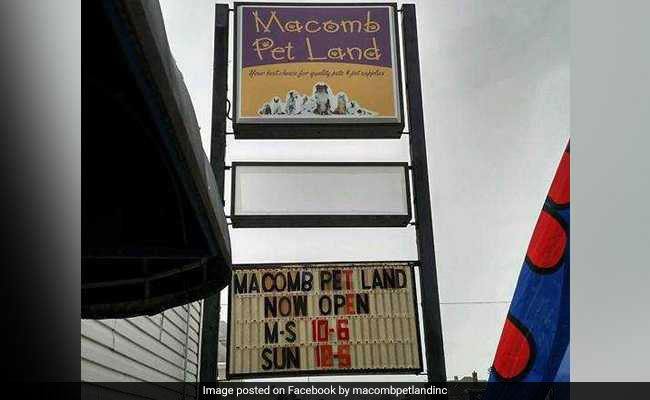 56 animals found alive in the pet store have been placed under foster care.

Macomb, Illinois: The Macomb, Illinois, pet store was closed for maintenance, according to a sign on its front door, which also indicated that the animals were being fed daily.

But there was a noticeable stench seeping out into the street, and a nearby business owner said they could hear a bird inside the locked-up shop.

Police were called to Macomb Pet Land on Saturday and made a disturbing discovery: That the power had been turned off and that 41 of the animals were dead. They included 10 snakes, eight rabbits, five hamsters, five mice, three hermit crabs, three tarantulas, a gerbil, a lizard, a rat, a guinea pig, a cockatiel, two degus - rodents similar to chinchillas - and an "unknown number of fish," Macomb Police Chief Curt Barker told reporters this week, according to the McDonough County Voice.

"Once officers entered the business, they were overwhelmed with the smell of dead animals and the smell of ammonia," Barker said.

The 56 animals still alive were loose inside the shop, and were placed in foster care after an investigation over the weekend, the McDonough County Animal Shelter wrote in a statement on Facebook. There were no dogs in the pet store and two cats found alive were taken into the shelter's custody and are doing well, shelter officials said.

The Macomb Fire Department helped ventilate the building, The Voice reported. Barker told reporters that the electricity had been shut off nearly two weeks before, on May 14, because the bill had not been paid.

On Sunday, the day after the animals were discovered, a warrant was issued for the arrest of the pet store's owner, 38-year-old Jessica Lynn Spangler of Avon, Illinois. She told investigators that she had arranged for someone else to care for the animals and did not know that they were not being looked after, Barker said, according to the Voice. Barker told reporters that investigators have contacted a person who was involved in taking care of the animals while the business was closed.

Spangler is charged with aggravated cruelty to animals and has been released from the McDonough County Jail on $10,000 cash bond, the Voice reported.

The shelter is accepting donations for food for the surviving animals, which include cockatiels, parakeets, lovebirds and Macaws; hamsters, gerbils, mice, degus and rabbits, the Voice reported. At the news conference, Barker thanked the more than a dozen volunteers and members of the Macomb High School Future Farmers of America chapter for helping rescue the animals.

Promoted
Listen to the latest songs, only on JioSaavn.com
"They did an outstanding job. A lot of people stepped up and helped out," Barker said, according to the Voice. "It just goes to show the community that we do have with the veterinary clinics, the other businesses coming in to help us. The number of volunteers that came forward was outstanding. I can't thank them enough for what they did to help us."