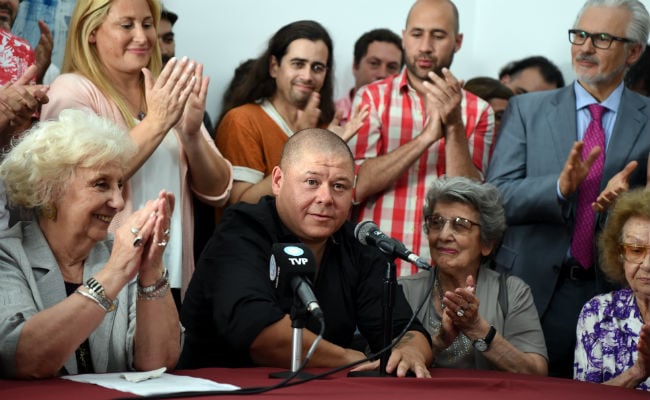 Buenos Aires: Mario Bravo and the mother he never knew, from whom he was snatched at birth in a jail by Argentina's military, hugged, laughed and wept on Tuesday, together at last.

"We cried a lot. We are talking about 38 years of searching," Bravo told a news conference after meeting his mother, Sara, thanks to help from the Grandmothers of the Plaza de Mayo rights group.

"It was a miracle to have found my mom alive.

"She heard my wail (as a newborn) and now she is hearing my voice, 38 years later."

During the junta regime, from 1976 to 1983, the Argentine military plucked people off the streets and detained leftists and even suspected leftists, and gave away the babies born to mothers they were holding in jail.

Some of the women who experienced this horror of the so-called "Dirty War" were raped in prison, and others were detained while pregnant.

While Bravo said he suspected something was strange about his identity as a child, it was after his adoptive mother died that he started searching in earnest, registering with a DNA database of families with missing and abducted children.

"This Christmas is going to be really expensive," Bravo joked of his suddenly much-expanded family.

"When you finally meet your mom, and you think of this like the movie of your life, and that they were searching for you all these years, and that that family was missing you...," he said, his voice trailing off.

The Grandmothers group has worked for 20 years trying to bring about such tearful reunions.

Of the hundreds of missing, Bravo was their "Missing grandchild No. 119."

He is not missing any more.