"Would Rather Have Them Stay On": Trump On 21 Stranded On Coronavirus-Hit Ship

The ship has been stranded off the San Francisco coast since Wednesday when two people, who had been on the ship during its previous voyage, tested positive for coronoavirus. 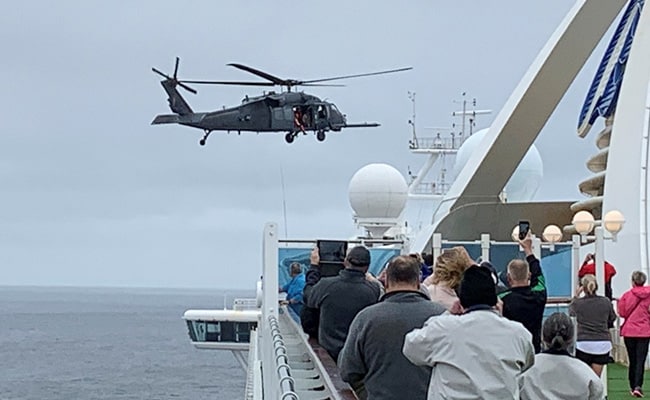 All 3,533 passengers and crew will be tested, US Vice-President Mike Pence said

Twenty-one people on board a cruise ship stranded off the coast of San Francisco have tested positive for the new coronavirus, Vice President Mike Pence said on Friday.

"Among those positive for coronavirus were 19 crew members and two passengers," said Pence, who has been tasked by President Donald Trump to coordinate the US government's response to the outbreak.

Twenty-one people aboard a cruise ship that was barred from docking in San Francisco have tested positive for coronavirus, US officials said on Friday, as half a dozen states reported their first cases of the fast-spreading respiratory disease.

Vice President Mike Pence, who is running the White House's response to the outbreak, said at a news conference that 19 crew members and two passengers out of 46 people tested so far on the Grand Princess ship had the virus.

He said the vessel with about 3,400 passengers and crew would be taken to a non-commercial port where everyone on board would be tested.

US President Donald Trump said he would rather have passengers remain on board the vessel, but that he would let others make the decision whether to let the passengers disembark.

"I'd rather have them stay on, personally, but I fully understand if they want to take them off," Trump told reporters after touring the Centers for Disease Control and Prevention (CDC) in Atlanta.

Keeping passengers quarantined aboard a coronavirus-hit ship proved to be a disastrous strategy in Japan, leading to one of the world's biggest outbreaks.

Trump earlier signed a bill that will provide $8.3 billion to bolster the country's capacity to test for coronavirus and fund other measures to stem an outbreak that has now killed 15 Americans.

On Friday, six states - Pennsylvania, Indiana, Minnesota, Kentucky, Oklahoma and Nebraska - reported their first cases, bringing the total to 25 states that now have the virus.

Word of the new cases capped a week during which the virus began to disrupt daily life for many Americans.

In Seattle, the epicentre of the nation's outbreak, there were school closures and orders to work from home. In Miami and Baltimore, areas less affected by the outbreak, music festivals and sporting events were cancelled or curtailed as a precaution.

In the most high profile cancellation, the South by Southwest (SXSW) music and tech festival in Austin, Texas was called off on Friday.

As stocks plunge and U.S. companies grapple with the economic fallout, the Trump administration is also weighing tax relief for the deeply affected cruise, travel and airline industries, according to a source familiar with the plan.

There are currently no approved vaccines or treatments for the respiratory illness, which emerged in China and has spread to more than 90 nations, killing more than 3,400 people and infecting more than 100,000 worldwide.

Americans are sharply divided over the dangers of the new coronavirus, according to a Reuters/Ipsos poll.

Critics of Trump, including Democratic lawmakers, have accused the president of downplaying the significance of the outbreak for political reasons. He has said the risk to Americans is low.

A union representing tens of thousands of U.S. government employees on Friday called on the Trump administration to take the coronavirus seriously for federal workers, especially those working in areas directly impacted by the outbreak.

Washington's King County has been the hardest hit area in the United States with at least a dozen of the nation's 15 coronavirus deaths, several of whom were people living at a nursing facility in the Seattle suburb of Kirkland.

The University of Washington announced on Friday that all classes would be held virtually for the rest of the winter term to limit contagion.

Apple Inc on Friday asked staff at its Silicon Valley headquarters to work from home if possible as a "precaution." Gap Inc <GPS.N> closed its New York headquarters because one employee had tested positive.

In Florida, Miami officials cancelled two music festivals on Friday - Ultra and Calle Ocho - because of potential risk that coronavirus could spread at events that bring large crowds into close proximity.

For similar reasons, the NCAA Division III men's basketball tournament will go ahead at Johns Hopkins University in Baltimore this weekend but without spectators, the university said on Friday.

The crisis has hit stocks hard. The benchmark S&P 500 closed down another 1.7% on Friday, after falling nearly 3% the day before.

As new states report their first cases, others watched their tally grow. Cases in New York jumped to 44 from 22, Governor Andrew Cuomo said on Friday, adding that some 4,000 people in the state were under precautionary quarantine and 44 under mandatory quarantine.

But he also tried to stem any sense of panic by the public. "I think the anxiety and the fear is more of a problem than the virus," Cuomo said.

Health and Human Services Secretary Alex Azar, who was present at Trump's bill signing, said the CDC had already sent tests for 75,000 people to public health labs around the country, amid widespread criticism of not enough tests available for states in need.

Azar said a private contractor was working with the CDC to send kits capable of testing 400,000 people to private hospitals and labs nationwide.

"The production and shipping of tests that we've talked about all week is completely on schedule," Azar said.

Anthony Fauci, the director of the National Institute of Allergy and Infectious Diseases, acknowledged issues that slowed distribution of coronavirus tests, but said the overall response was going well.

"There were certainly some missteps in the beginning," he told NBC's Today program. "In the next couple of weeks we should be ratcheted up to get many more out."