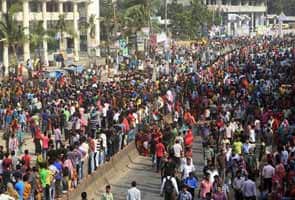 Dhaka: Police have used batons, rubber bullets and tear gas to stop protests by garment workers in Bangladesh who want higher wages while factory owners fear they may miss shipment to the United States and Europe.

Police and news reports say the fifth day of protests Wednesday in two industrial districts near Dhaka forced authorities to close more than 100 factories for the day.

A police official in the Gazipur district says the workers have dispersed there. A.K.M. Mosharaf Hossain would not confirm any injuries in Gazipur.

Prothom Alo newspaper says clashes in the Narayanganj district injured at least 10 people.
The workers are demanding 8,114 takas (around $100) in place of 3,000 takas ($38) as a monthly minimum wage.

Promoted
Listen to the latest songs, only on JioSaavn.com
Bangladesh earns $20 billion a year from garment exports.