Has Prime Minister Narendra Modi met his match in Mamata Banerjee or will West Bengal change its political loyalties? As the battle for Bengal heats up, Prannoy Roy and his team on The Countdown get you special insights from the Bengal electorate, along with exclusive interviews with West Bengal Chief Minister Mamata Banerjee, BJP's Dilip Ghosh, CPI(M)'s Surjya Kanta Mishra and Somen Mitra from the Congress. West Bengal is voting in all seven phases for the national elections that end on May 19. The BJP is making a determined bid to expand its influence in West Bengal where the support base of the Congress and the Left has shrunk over the years. Over the last 18 months, the BJP has edged out the CPM to become the state's principal opposition party. West Bengal has a total of 42 Lok Sabha seats, third highest after Uttar Pradesh's 80 and Maharashtra's 48. The BJP had won only two seats in the state in 2014.

The decline of the Congress in West Bengal meant the rise of Trinamool: 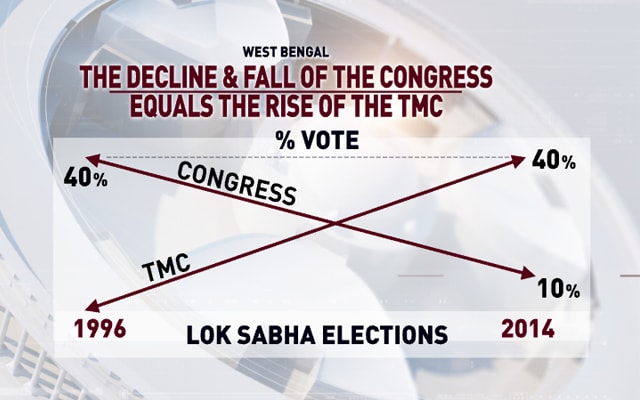 The decline of the Left equalled the rise of BJP: 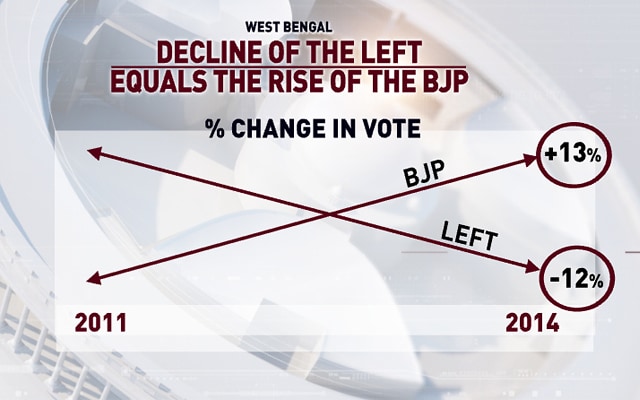 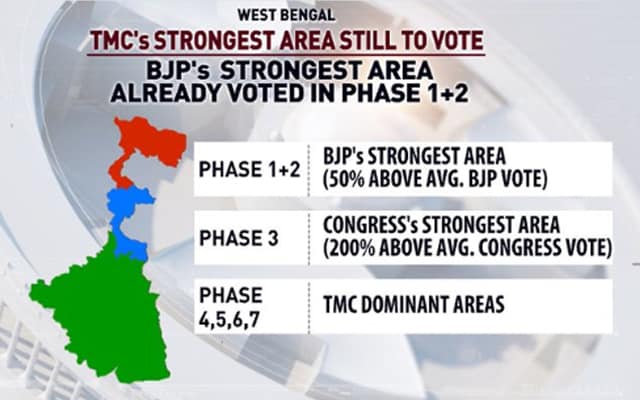 The age factor and urban-rural divide in parties' support base: 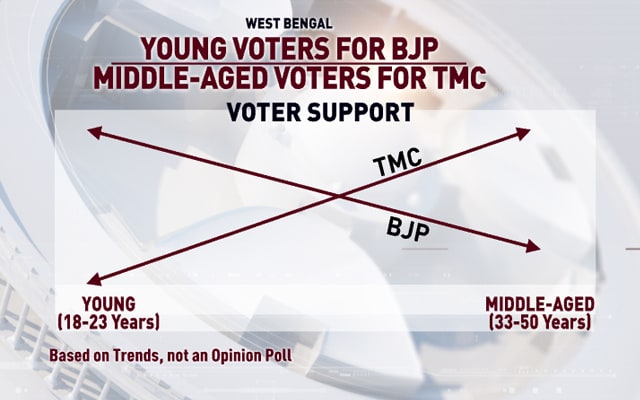 The Muslim vote is crucial in West Bengal. Here's why: 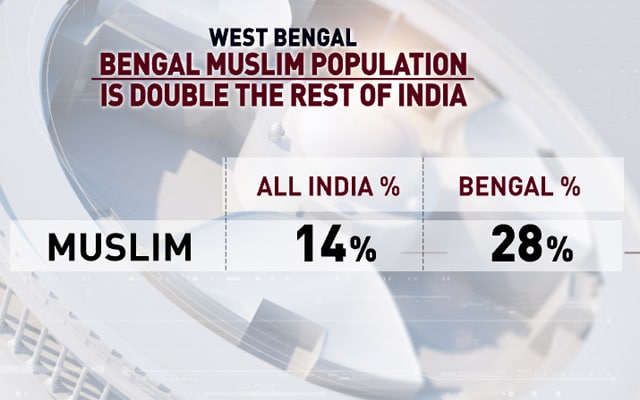 Here's what the youth of Kolkata tells Prannoy Roy about their hopes from this election season:

Trinamool Congress and the Muslim vote in West Bengal 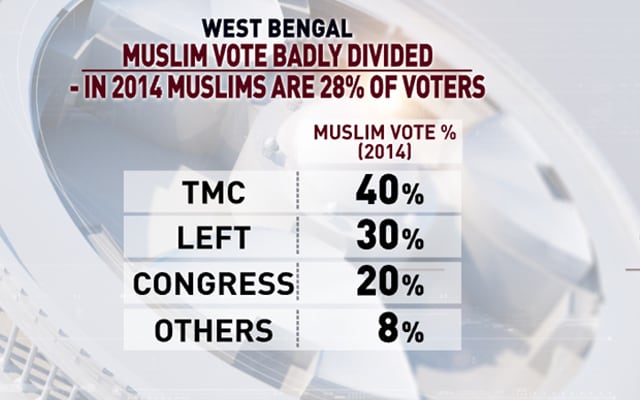 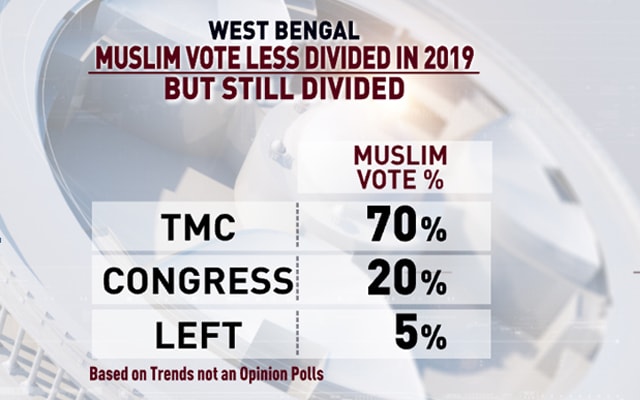 A Muslim voter, who runs a business in Kolkata, tells NDTV's Prannoy Roy that he "feels safe" under the Mamata Banerjee government. "They (the TMC government) work towards developing Urdu. She (Mamata Banerjee) stays with everybody," he says.

Trinamool Congress does better in seats that do not have a high Muslim population: 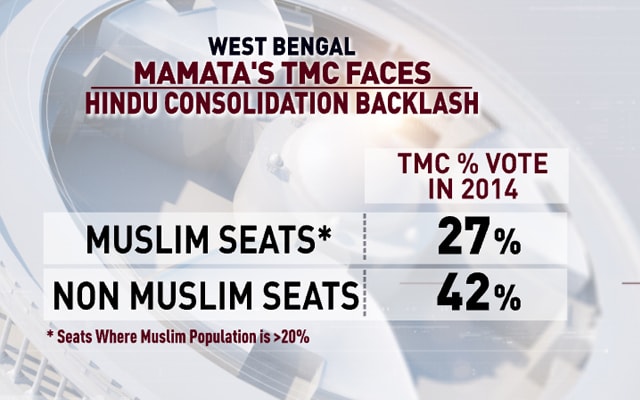 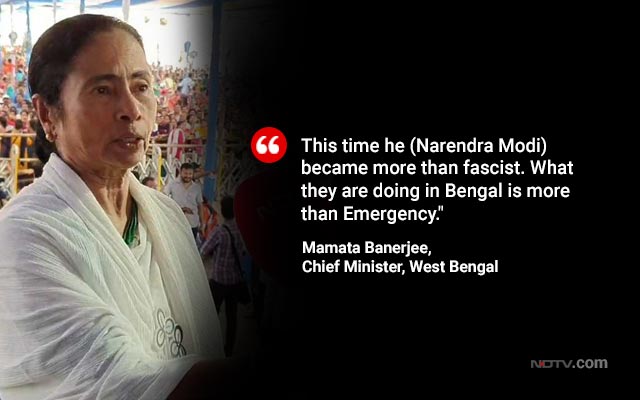 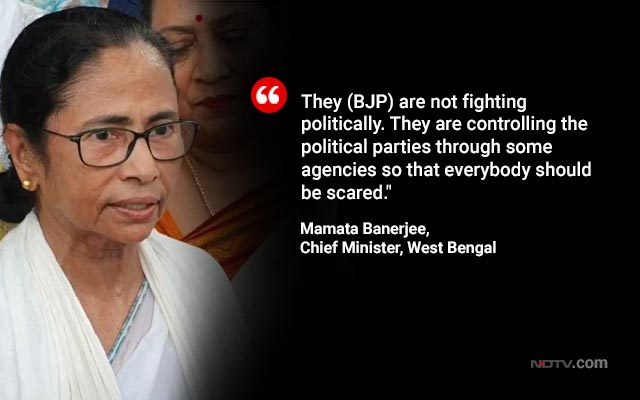 "I am fighting with Narendra Modi, BJP and the RSS": West Bengal Chief Minister Mamata Banerjee on 'The Countdown' 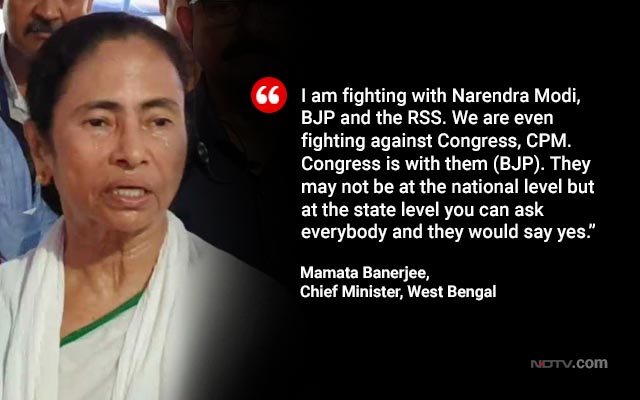 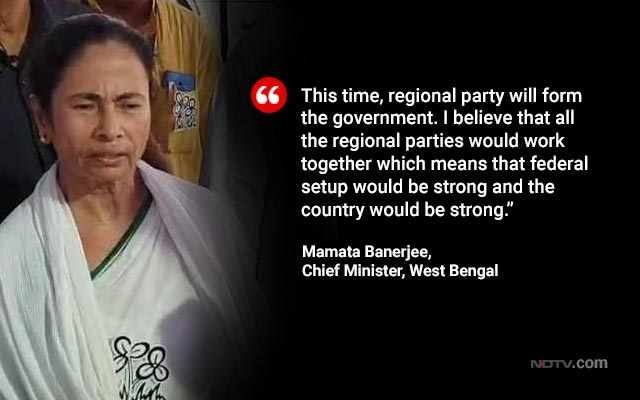 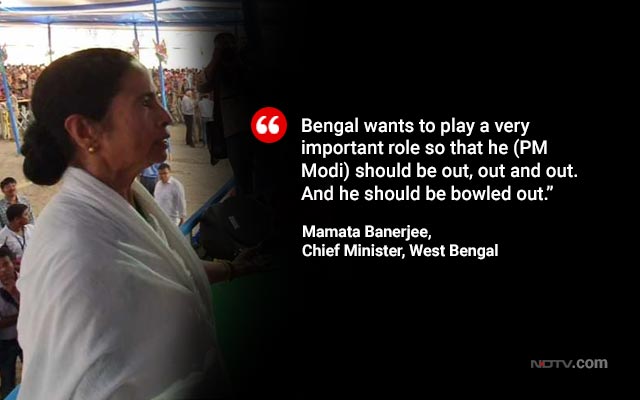 I want to see that Narendra Modi should go out: Mamata Banerjee to NDTV

Talking to NDTV's Prannoy Roy on the sidelines of her election rally, Trinamool Congress supremo and West Bengal Chief Minister Mamata Banerjee said that she wants to see Prime Minister Narendra Modi go out of power. "Bengal wants to play a very important role so that Narendra Modi is oust, oust and oust. He should be out, out and out. And he should be bowled out," she told NDTV. She asserted that post this general elections, regional parties would walk together and form the government. On a question whether she would become Prime Minister if all opposition parties come together, Ms Banerjee said, "I want to be a little worker that will be helpful to all the parties. I want to see there must be a united government."

The urban-rural divide in parties' support base: 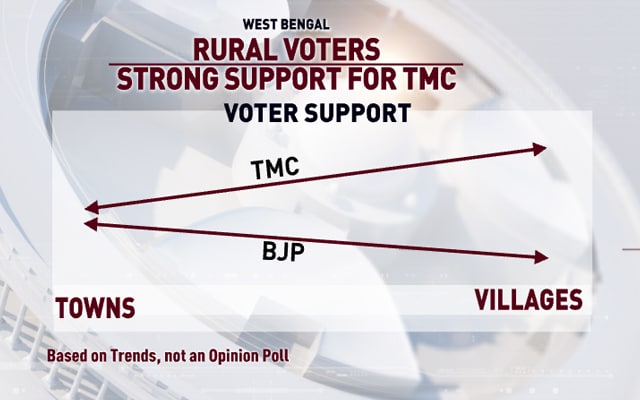 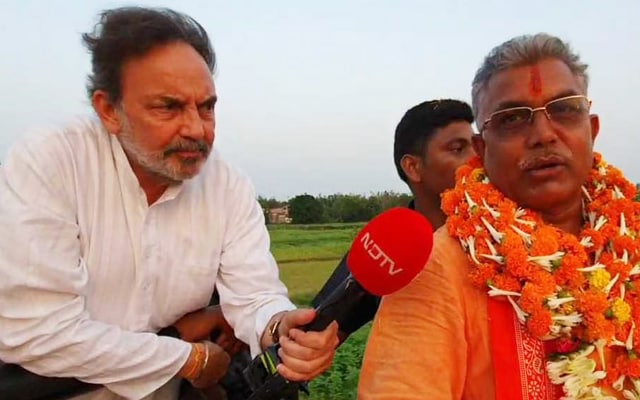 "I haven't seen such an atmosphere in Bengal": BJP's Dilip Ghosh on 'The Countdown' 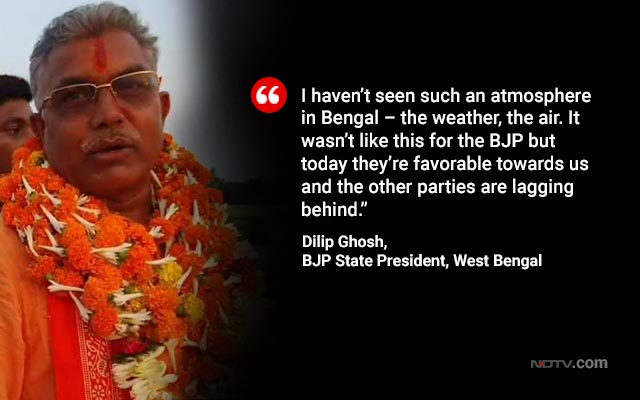 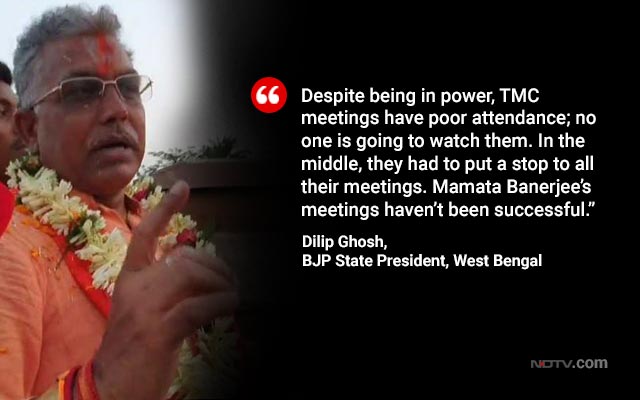 "Muslims are one. But they have been fragmented - who is creating the partition? We have never done it. None of our states have such arrangements": Dilip Ghosh 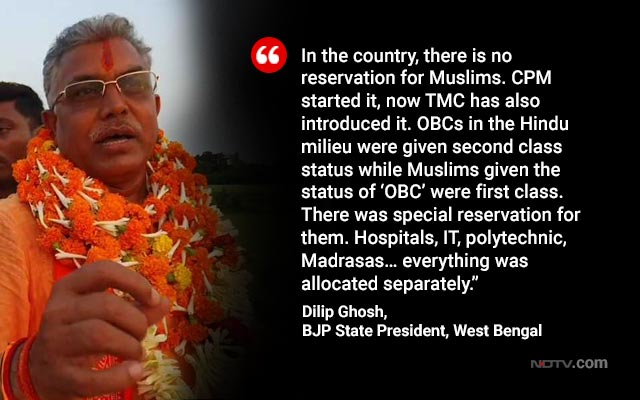 "Right now, we are fighting for the Prime Minister": BJP's Dilip Ghosh on 'The Countdown' 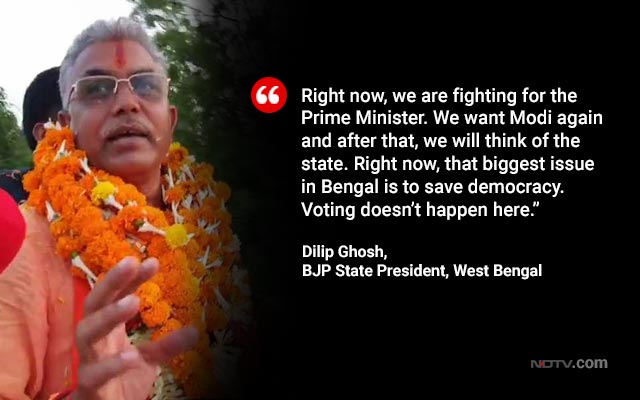 It wasn't like this for the BJP (in West Bengal) but today people are favourable towards us and the other parties are lagging behind. Sure, people are voting in the name of Narendra Modi but it is our party. They are voting for the lotus. 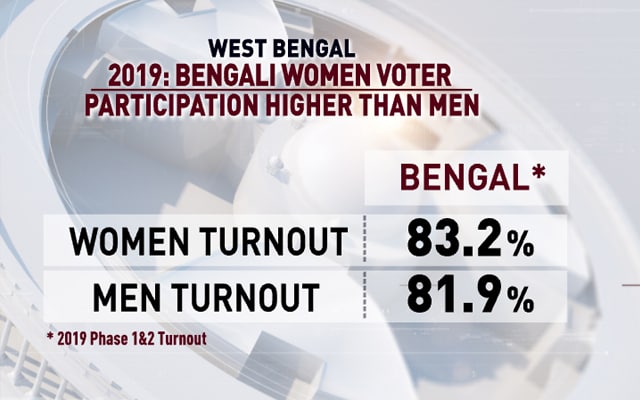 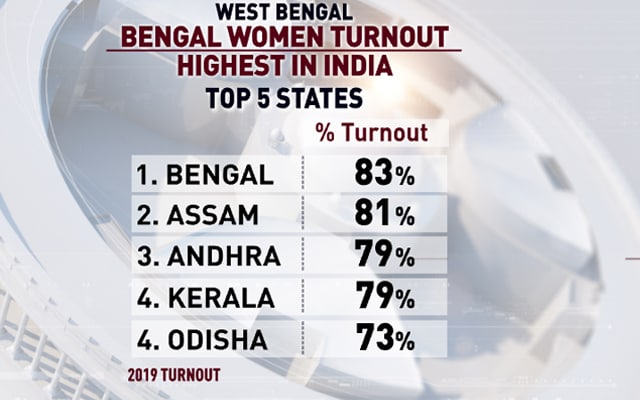 - We are organisationally bankrupt. There is no organisational infrastructure. Congress was immobile for the last 10-15 years. So I will have to first build the Congress.

- We need to know where we are lacking. We need to build up the Congress in Bengal.

- The Trinamool Congress tried to appease minority voters but did nothing for the minority community in reality. Congress will get a sizeable minority votes in West Bengal. 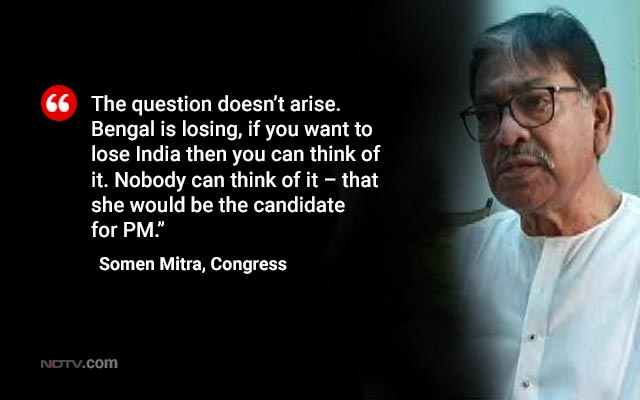 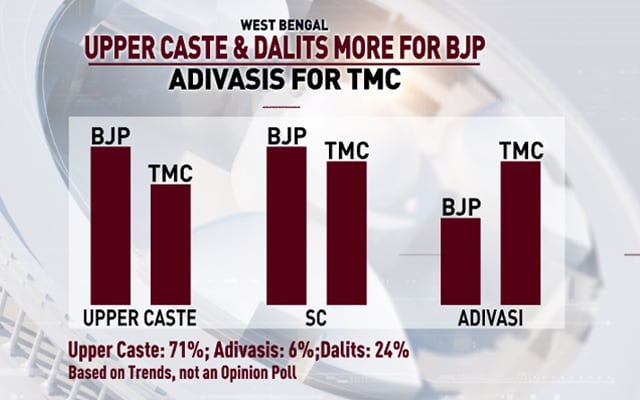 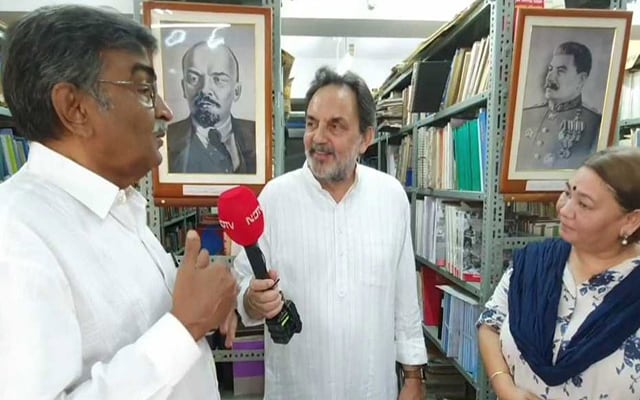 Surjya Kanta Mishra of the CPM says that the Left party was not prepared for an "attack" from the BJP, but asserts that his party will always stay relevant in the battle in Bengal. Slamming the Trinamool Congress, Mr Mishra says, "I don't think that TMC can be depended upon to oust BJP. I say repeatedly that there's a 'Trojan horse' in the opposition campaign."

A bookseller at Kolkata's famous College Street tells NDTV that he is not pleased about the agendas that Prime Minister Narendra Modi narrates in West Bengal. "Modi ji is much lower when compared to Atal ji. He says the same 'Mamata-Narada-Sarada'. People have nothing to do with these things," he says. He also expresses his displeasure about PM Modi using anecdotes of the Indian Army during election rallies in a bid to canvass for votes. "How can someone even do politics with the army?" the man exclaims. 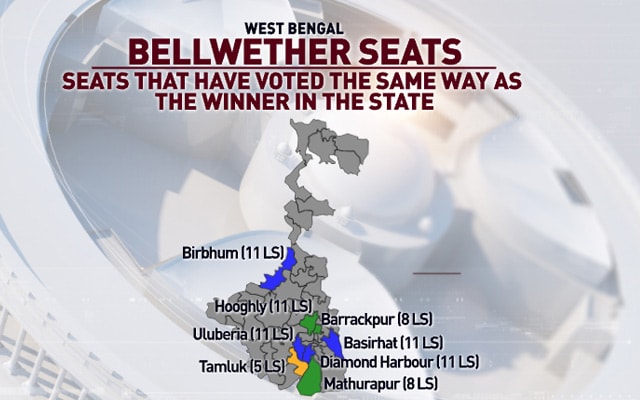