The Congress is reckoning on the anti-incumbency factor against the Vasundhara Raje government in Rajasthan, which will go to polls on Friday to elect a new state government. The party is contesting the polls under the joint leadership of veteran Ashok Gehlot and Sachin Pilot. The BJP is fighting with current Chief Minister Vasundhara Raje as its face, with Prime Minister Narendra Modi and party chief Amit Shah backing her with their campaign rallies. Both the sides have alleged infighting in each other's ranks. On this episode of The Countdown, NDTV's Prannoy Roy analyses with other poll pundits what factors would decide the poll outcome in Rajasthan.

BJP defeated the Congress in the 2013 elections, winning a clear majority in the 200-member Rajasthan Assembly. Since the 1993 elections, Rajasthan has alternated between the Congress and BJP every five years. Polling for 200-member Assembly will be held on Friday. 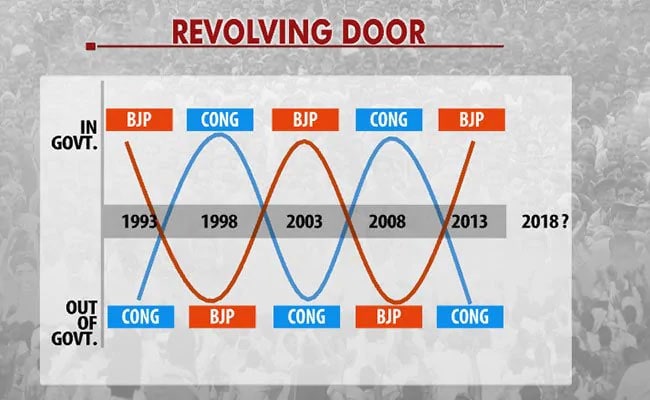 The Congress needs an 8 per cent swing to win a majority in the 200-member Rajasthan assembly. 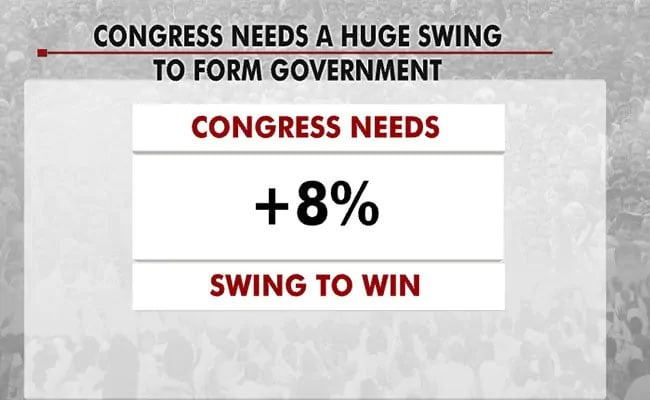 "We have worked doggedly for five years. But honestly, there is a failure as far as I am concerned. I am not a great PR person... There is no time, either you work or you don't. So, I haven't had any time."

BJP's Vasundhara Raje on being a woman chief minister

"The matter of gender doesn't come into this. Once you have decided to step into this, you haven't come with your eyes closed... there is no point taking refuge behind being a woman. You have to be out there and do what you need to do... Every person who is in the position of power at this level, has to stand their ground and be tough."

I don't have any regrets. I don't because there is nothing that I could've done differently: Vasundhara Raje

"Lynchings are like murder, which is not a good thing. I don't think we should look at it as a separate or a special matter. It is a murder and if something like that happens, then it is a law and order problem and it has to be judged by how it was taken care of. Law and order was taken care of immediately."

Recent panchayat and municipal elections in Rajasthan produced worrying results for the BJP. 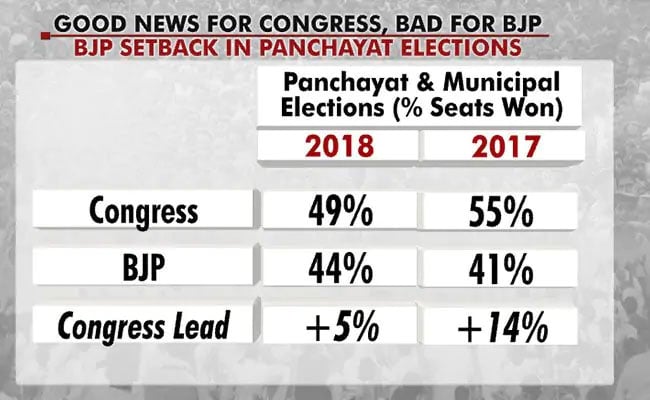 The Congress' victory in three by-elections in Rajasthan in February indicated a huge 17% swing against the BJP. 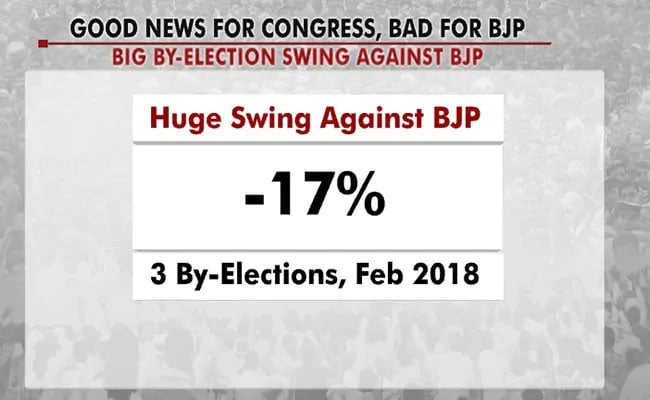 "The face of the campaign is the local person who has been heading the government," says Congress' Sachin Pilot

"No matter who comes to campaign from Delhi, the people of Rajasthan want answers for the five years of Vasundhara ji's government. The report card is appalling and no matter how much Amit Shah ji and Modi ji come and campaign, they cannot dissociate themselves from the governance that Vasundhara ji has given."

"In 2013, Vasundhara ji got the kind of mandate that she could've changed the face of Rajasthan. So expectations were very high. They overpromised a lot... But for five years, the kind of arrogance we have seen from the government - there have been droughts, there have been floods, people have moved out from villages. But never have people killed themselves before and that is something that has happened for the first time in Rajasthan."

"We did fairly badly (in 2013), and that for us was a wake-up call. We changed our strategy. Since I became party president, from day one I was on election board because I know that in past six months, people were prone to understand that leaders and political parties are coming here just to get votes. So, to create a positive perception in the sub-conscious of the voters, we had to start working from day one."

"Have to deliver the basic things that a dignified human deserves," says Congress' Sachin Pilot

"We can talk about the big items and big things. But we have to deliver the basic things that a dignified human deserves and needs. And it is not too much to expect a school teacher and a good education. We cannot allow these hopes to get trampled just because we want to look fancy and do something that is going to be very popular and talked about."

In the 2013 Rajasthan elections, more women voted than men. This time, the turnout of women voters could be even higher. 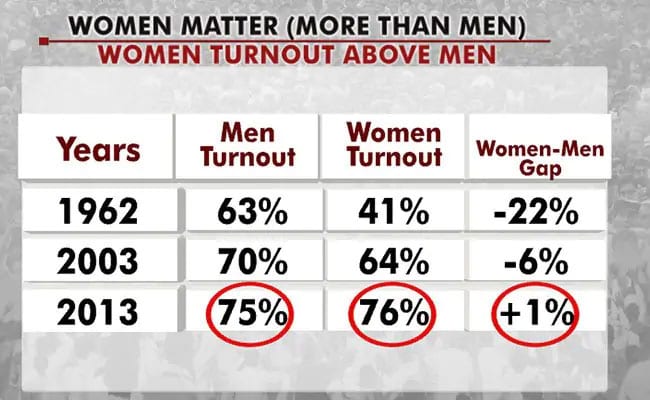 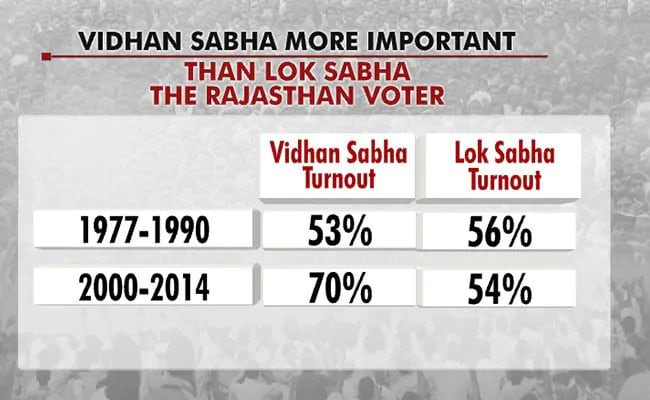 A look at how castes are spread across Rajasthan and the possibility of a major shift in the way they vote. 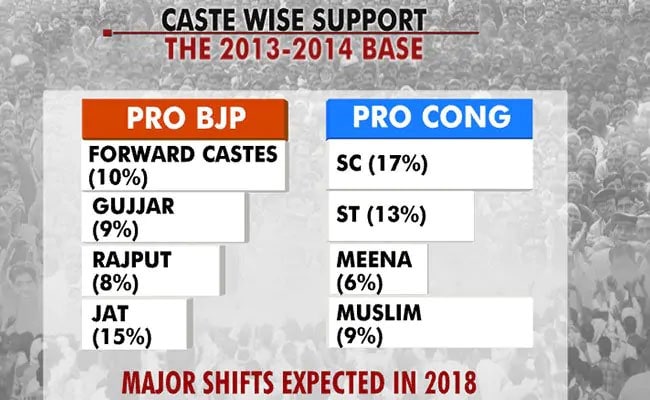 The politics of the country has changed. Politics today run on perceptions: Ashok Gehlot

It is my duty to do what the party (Congress) needs me for: Ashok Gehlot

Can the BJP defy tradition and win a second consecutive term in Rajasthan? Here's what opinion polls suggest. 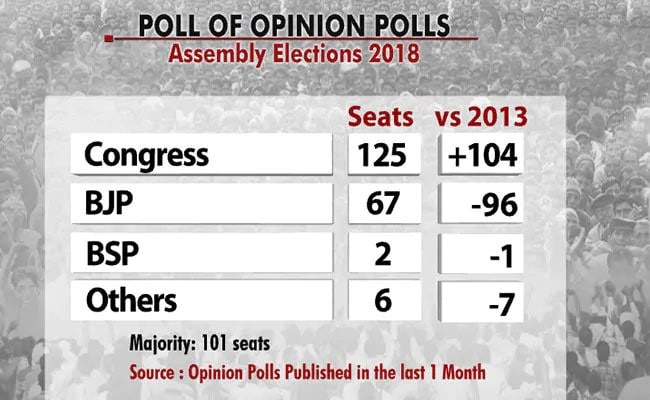 The 21 bellwether seats to watch out for as polling for the 200-member Assembly is held on Friday. Kumbhalgarh has always voted for the same party that's won the state in the last 37 years. 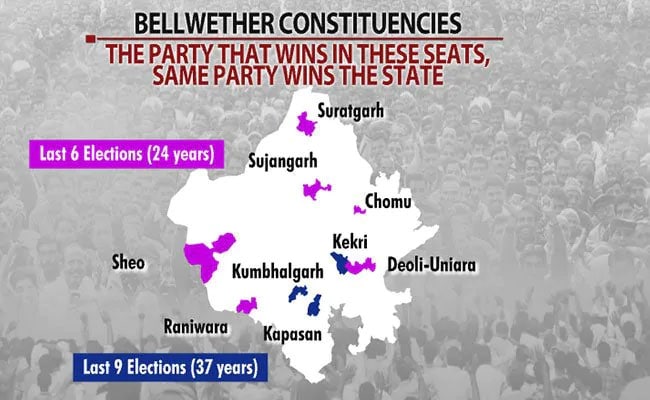 Will Rajasthan voters pick the party they voted for in the last assembly elections? Do they want a change of guard? Here's what our interviews with 103 people show. 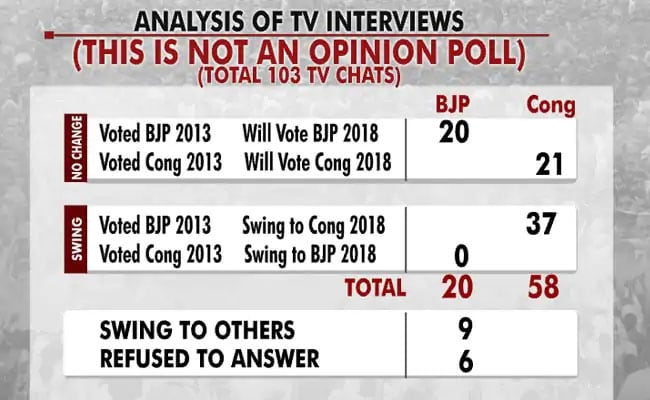