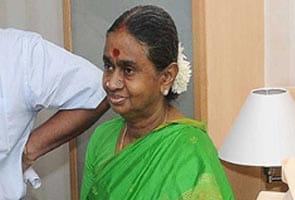 The order came following a direction by the Supreme Court which, on August 22, had refused to exempt Ms Ammal from deposing as a witness in the case. It, however, had exempted her from personal appearance in the special court.

It had also directed that she be examined by a commission in Chennai.

"Dayalu Karunanidhi is a witness cited in the list of prosecution witnesses and is to be examined in this case. However, as per the order dated August 22, 2013 passed by the Supreme Court, she is to be examined on commission," special CBI judge OP Saini said.

"Accordingly, as per section 285 CrPC, Chief Metropolitan Magistrate, Chennai, is appointed as Commissioner with request to examine her at Chennai as per law, she being a resident of Chennai," Mr Saini added.

The court directed that relevant documents be sent to the CMM Chennai and also said that the accused were also at liberty to seek documents which they would require for cross-examining Ms Ammal.

The Supreme Court had passed the August 22 order on a plea filed by Ms Ammal's daughter Selvi seeking the court's direction to exempt her mother from appearing before the trial court on medical grounds.

The apex court, citing a medical report, said Ms Ammal was unfit to depose as a witness before the
court as she could not travel. The top court asked the special CBI court to appoint a commission to examine her in Chennai where she resides.

Promoted
Listen to the latest songs, only on JioSaavn.com
Mr Karunanidhi's daughter and DMK MP Kanimozhi and Sharad Kumar, managing director of Kalaignar TV, are facing trial in the case along with former Telecom Minister A Raja and others.