What was meant to be a colourful welcome for Maximum City's brand new engineering marvel, spiralled into an unseemly controversy for Bollywood icon Amitabh Bachchan ,who in BJP's words, became a victim of the "feud" within Congress and the "fear" of the Gandhi family. 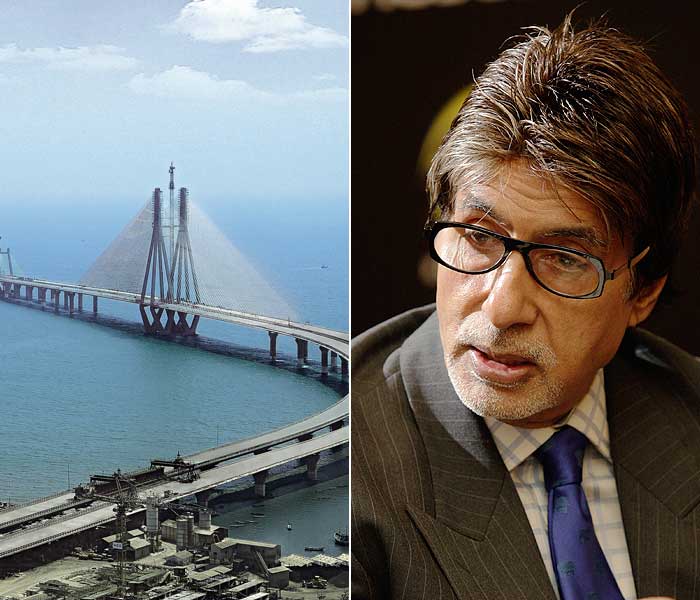 What was meant to be a colourful welcome for Maximum City's brand new engineering marvel, spiralled into an unseemly controversy for Bollywood icon Amitabh Bachchan ,who in BJP's words, became a victim of the "feud" within Congress and the "fear" of the Gandhi family.

As the northern carriageway of the Bandra-Worli sealink was inaugurated on March 24 by special invitee Amitabh Bachchan, voices within the Mumbai Congress, unhappy with the presence of the iconic actor on a government platform, grew louder.

History is witness to the highs and lows between the Gandhis and the Bachchans over the years. The two families were friends for long. And then came the dark shadows. The Gandhi-Bachchan saga is no less than a typical Bollywood flick which has witnessed several twists and turns. Here's a look...

The relations between the two families began with Dr Harivansh Rai Bachchan working in India's foreign ministry as a Hindi Officer. Jawahar Lal Nehru greatly respected him for his literary genius and the two families came close, while in Allahabad. Harivansh's wife and Amitabh's mother Teji Bachchan became a close friend of Nehru's daughter Indira. Later when the Bachchans moved to Delhi, Teji got fame as a social activist, and her friendship with Indira Gandhi became deeper. 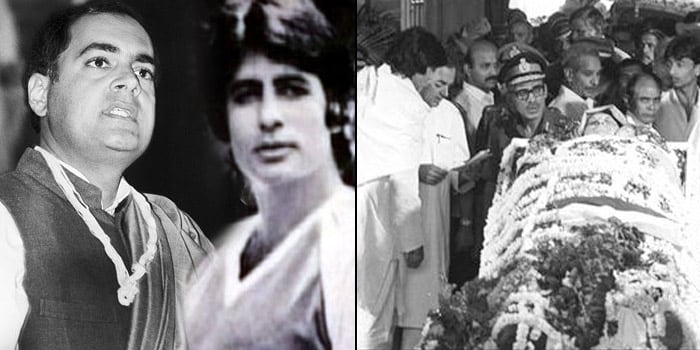 The families remained very close until Indira's assassination in 1984. The relationship continued in the succeeding generations too with Amitabh and Rajiv as dear friends.

It was Amitabh Bachchan who received Sonia on a chilly winter morning at Palam airport on January 13, 1968 when she came to India as Rajiv's fiancée. She put up at the Bachchans' residence and Teji acted as Sonia's godmother and helped her get accustomed to Indian culture. 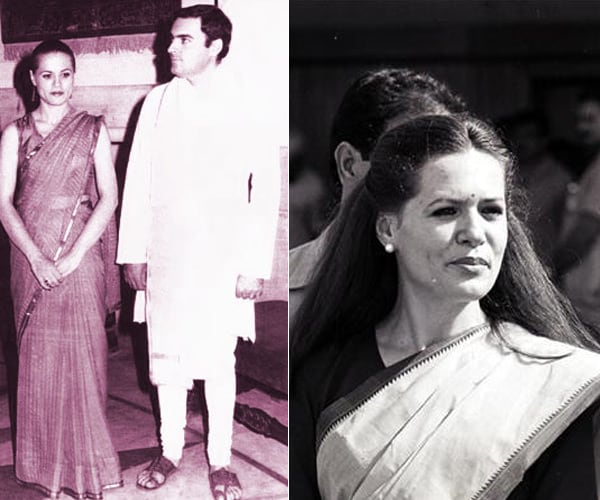 According to reports, when Rajiv Gandhi was courting Sonia Antonio Maino, the shy young Italian girl, it was Teji who acted as a mediator when the powerful Indira was reluctant about her son's wedding to the Italian girl.

When the Rajiv-Sonia marriage was finally fixed in 1969, Sonia and her family moved in briefly and stayed at the Bachchans' New Delhi residence at 13, Willingdoon Crescent. 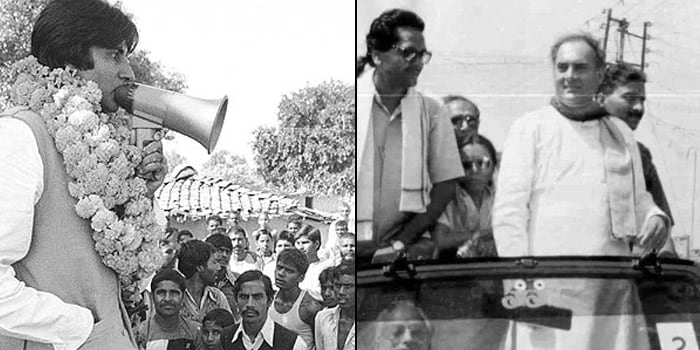 The relations touched a new high in 1984 when Rajiv Gandhi persuaded his friend Amitabh to don the political cap and contest election from Allahabad on a Congress ticket. 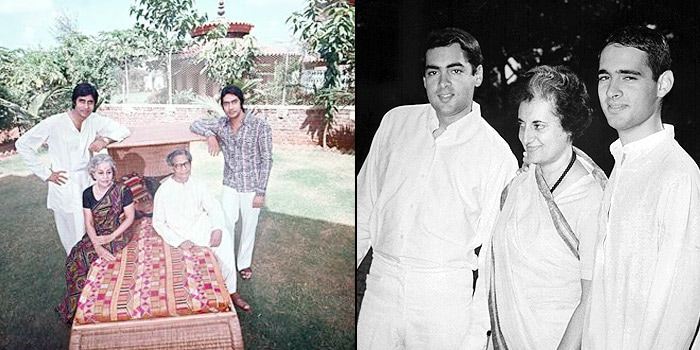 Amitabh was given a Congress ticket in 1984 and won from Allahabad with a handsome margin for one term. His emphatic win over Hemvati Nandan Bahuguna was perhaps the most memorable high in the bonhomie between the two high-profile families.

And with this political foray, Amitabh became a part of the famous youth brigade in Delhi, comprising Satish Sharma, Arun Nehru, Arun Singh and Kamal Nath. 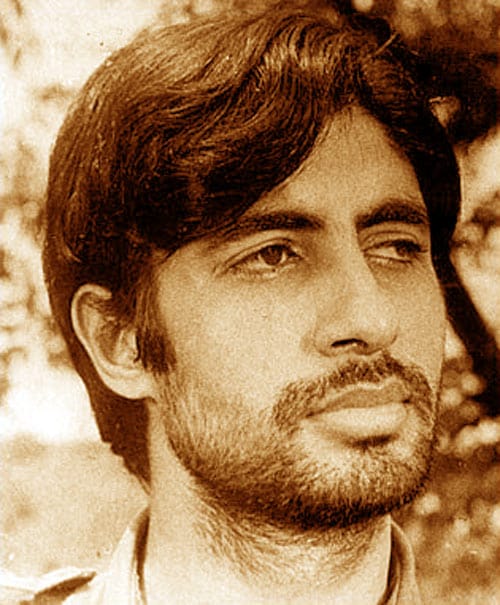 Amitabh quit politics and resigned after three years when a newspaper reported his involvement in the Bofors scam. This marked the beginning of souring of relations between the two families. Amitabh was later given a clean chit in the case by the Supreme Court. 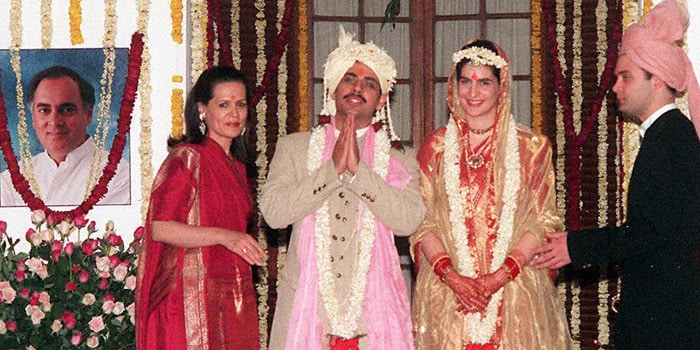 The defence deal sowed the seeds of differences between the old friends. But despite bad times, the two families managed to maintain a facade of relationship and Big B joined the celebrations of the marriage of Priyanka Gandhi. 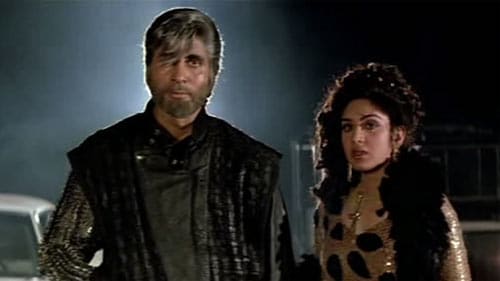 After a short stint in politics, Bachchan returned to Bollywood in 1988, but after the success of Shahenshah, his star power began to wane as all of his subsequent films failed at the box office.

The 1991 hit film, Hum, looked like it might reverse this trend, but the momentum was short-lived. After 1992, Bachchan went into semi-retirement for five years.

The relationship between the two families worsened after Rajiv Gandhi's assassination in 1991, when the Gandhis felt that the Bachchans had left them alone in distress. The family, that could once walk anytime into the prime ministerial household, was suddenly treated like a pariah. 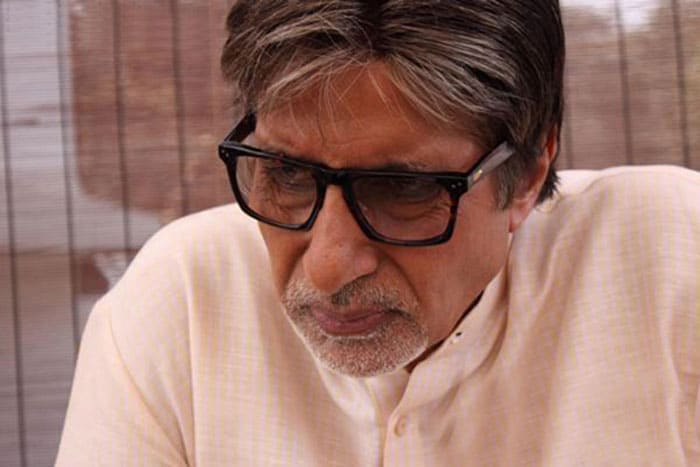 Bachchans on the other hand said the Gandhis brought them in politics and left them midway in trouble. Also, when Big B's company ABCL collapsed and he was passing through a huge economic crisis, the Gandhis did not come to his rescue. The crisis soured the relations further and Amitabh's wife, Jaya Bachchan went public with her disappointment. 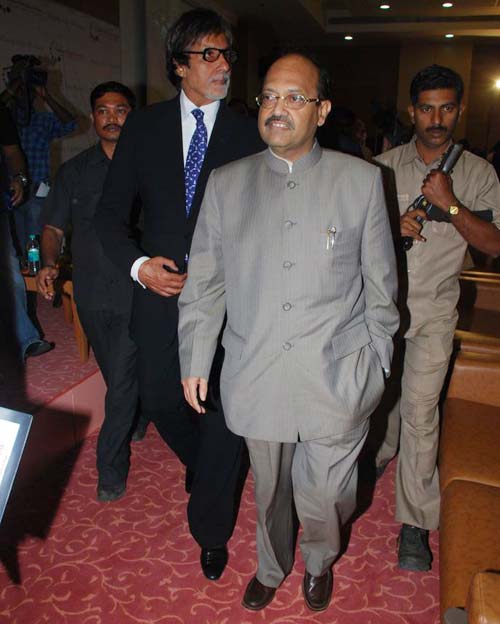 Amitabh's old friend, Amar Singh, helped him during the financial crisis due to the failure of his company ABCL. The two became very close and later Jaya Bachchan was nominated to Rajya Sabha as a Samajvadi party member. The rift between the Bachchans and Gandhis widened as the Bachchans grew close to Amar Singh who, it is believed, was never in the good books of the Gandhis. 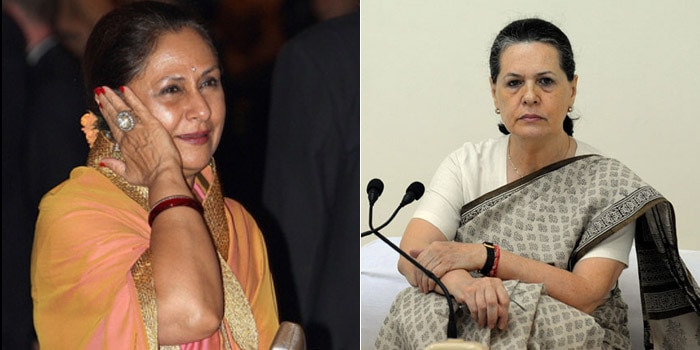 At an election meeting in 2004, Jaya Bachchan said: "Those who brought us into politics left us midway. They left us when we were in a crisis. They are known to betray people.” The reference was more than obvious. 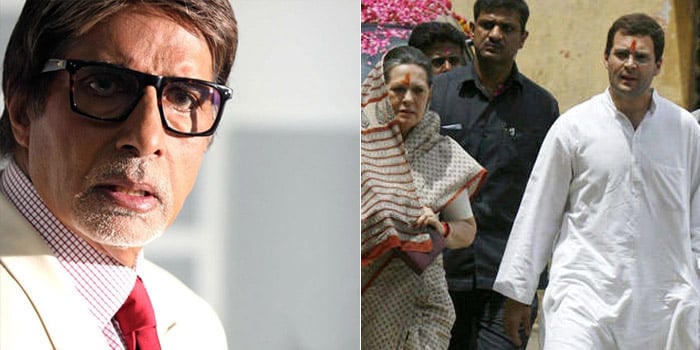 Subsequently, Rahul Gandhi retaliated: "The Bachchans are lying. Why are they levelling the charge now after so many years? Amitabh was introduced to politics two decades ago. They have changed loyalties. Those who know the Gandhi family know we've never betrayed anyone. People know better about who betrayed whom. People also know who their loyalties are with." 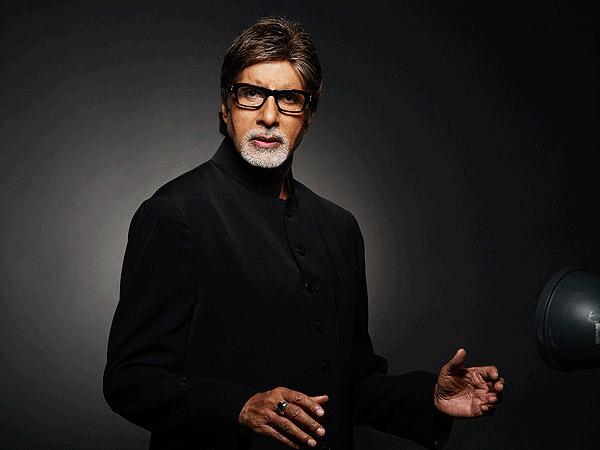 Amitabh Bachchan too aired his views on the controversy: "They (the Gandhi family) are the rajas (rulers) and we (the Bachchans) are runk (subjects). Any continuation of the relationship depends on the rulers' mood. Now, they accuse my family of lying." 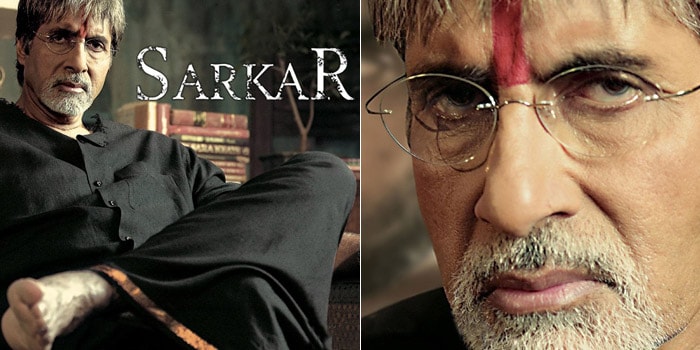 Amitabh Bachchan's close relationship with Bal Thackeray, a bitter political enemy of the Congress, only made matters worse. Thackeray always stood by the actor, whether it was during the release of Sarkar, a controversial film starring the actor, or when nephew Raj accused Bachchan of betraying Maharashtra. 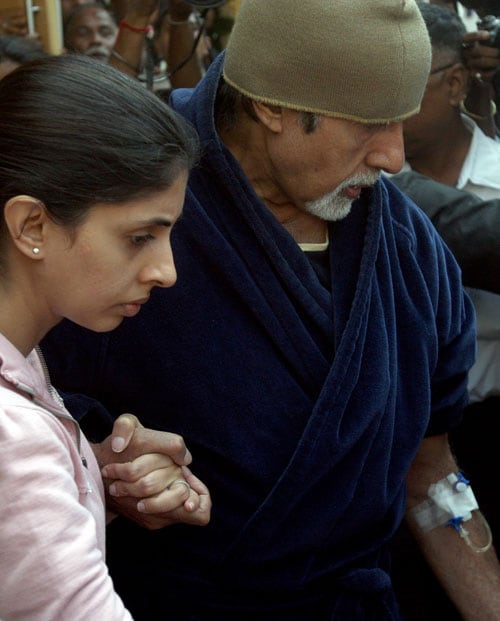 In 2005, during the Congress regime, Amitabh Bachchan was slapped with a Rs 4.5 crore income tax notice while he was still at the Lilavati Hospital in Mumbai recovering from a serious intestinal ailment. Apparently, Big B paid the bill from his hospital bed. 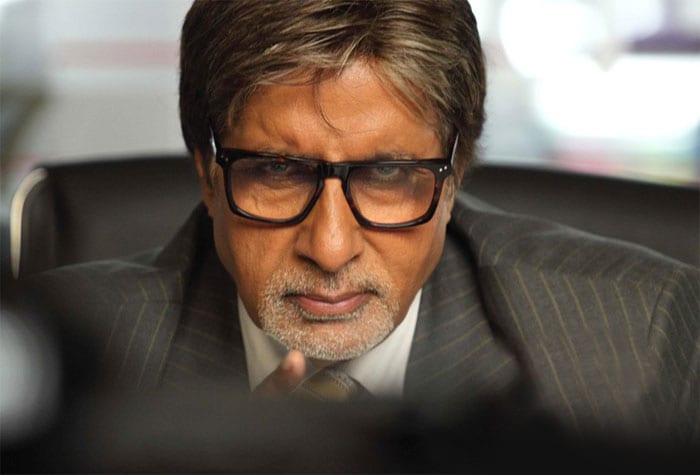 In February 2006, the I-T team was at it again. This time they were seeking details of the tax deducted at source for his company, Amitabh Bachchan Corporation Ltd. 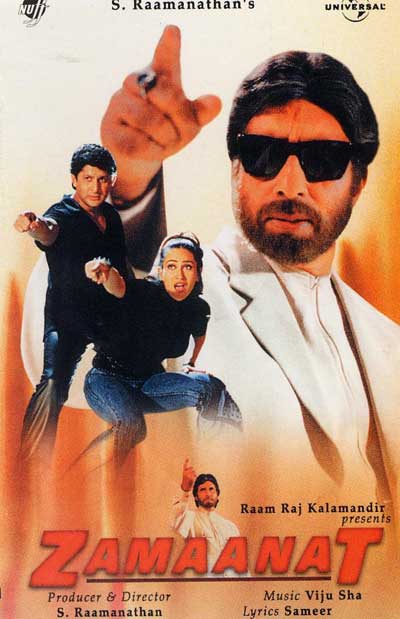 In June, a report that Amitabh Bachchan wore Ray-Ban sunglasses worth Rs 2,70,000 as the blind advocate in Zamaanat, and then gifted them to director and buddy S Ramanathan, set off the Income Tax department again. They wanted him to explain how he made such an expensive purchase. 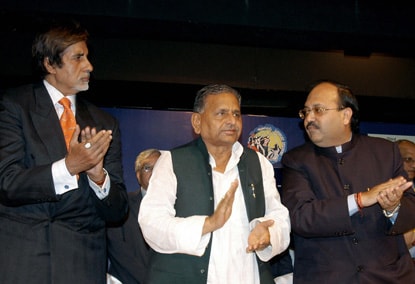 The Samajwadi Party made its disapproval of this harassment known to the Congress party. SP workers and fans staged protests at income tax offices across Uttar Pradesh and Mumbai. According to the party's top brass, Bachchan was being harassed for his proximity to Mulayam Singh Yadav and Amar Singh. 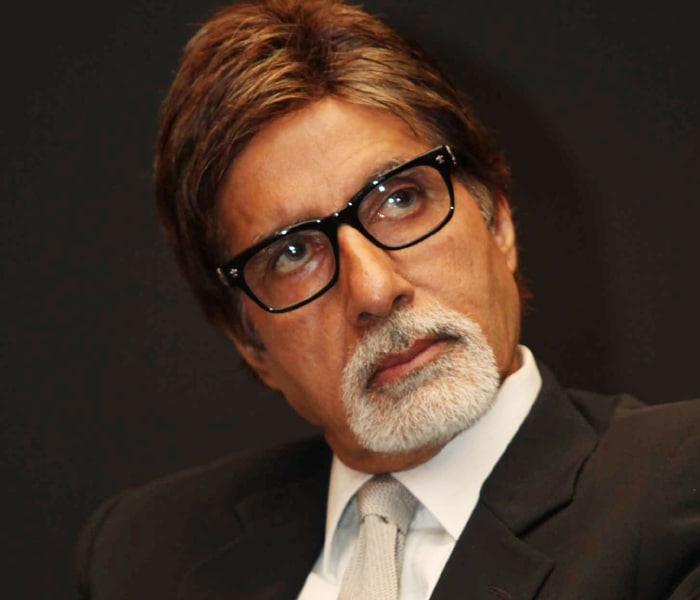 In 2007, the Congress-led Maharashtra government accused Amitabh of illegally possessing agricultural land near Pune. Bachchan had justified the purchase of eight hectares of land at Lonavala on grounds that he was a farmer in UP.

The state government asked him to prove his farmer status, following which Amitabh produced documents, which showed that he owned agricultural land in Barabanki in Uttar Pradesh.

But in a ruling, the Uttar Pradesh court said Amitabh Bachchan is not a farmer and hence he has no right to buy farmland in the state. 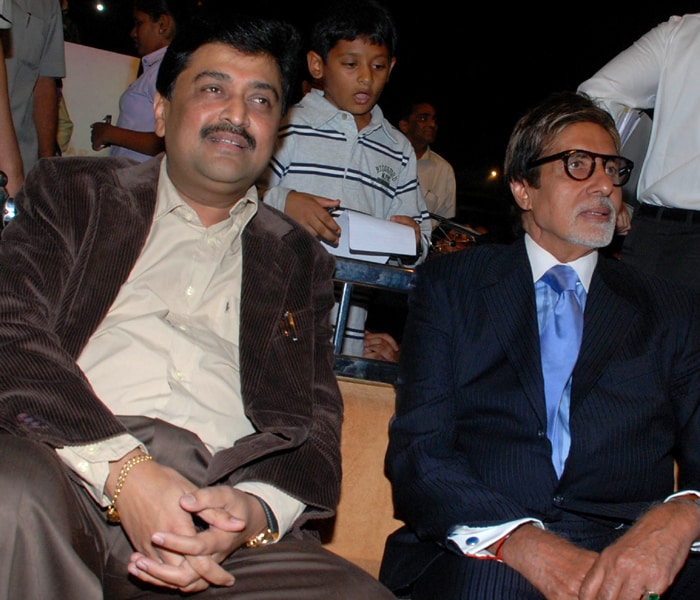 Cut to March 2010 and yet another political controversy for Amitabh Bachchan after the superstar attended a ceremony in Mumbai for the inauguration of the newest phase of the Bandra-Worli Sea Link.

That appearance created a storm, with some in the Mumbai Congress openly expressing their unhappiness. Maharashtra Chief Minister Ashok Chavan said, "He's the brand ambassador of another state, we would like to promote our state. So perhaps I would not have attended the function had I known he would be present."

Given that Amitabh Bachchan and the Gandhi family share a rather uneasy equation, Congressmen seem desperate to prove their loyalty to the Gandhi parivaar. But in their bid at political sycophancy, they seem completely unconcerned about the humiliation it might cause to one of India's biggest icons who was only there because he was invited.