Karunanidhi turns 89: A look at his personal and political journey

He has a habit of winning. But his party has seen both, political crests and troughs. The last few months have been rather unlucky for M Karunanidhi, the wily old political battle-axe. Things got worse with the arrest of his daughter Kanimozhi in connection with the 2G scam. As the DMK patriarch turns 88, here is a look at Karunanidhi's personal and political journey. Karunanidhi is celebrating his 89th birthday today. This time the grand old man of Indian politics has reasons to cheer - his daughter Kanimozhi who was behind bars in the 2G case on his birthday last year is out on bail and will be with him for the birthday bash. He has a habit of winning. His party has seen both, political crests and troughs. Here is a look at Karunanidhi's personal and political journey.

Born on June 3, 1924 at Thirukkuvalai in the Tanjore District, Karunanidhi came from a humble and poor family. It's been a long journey for the his clan that made it to the top of Tamil Nadu politics. 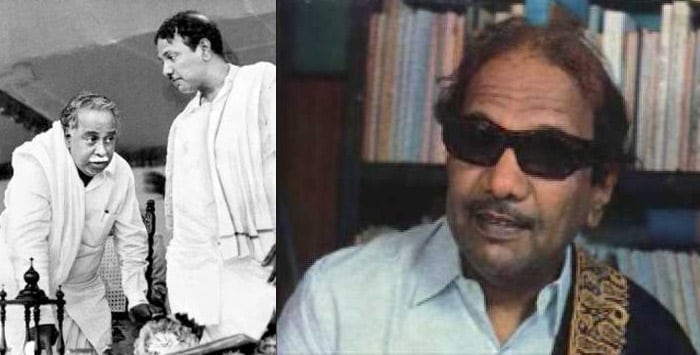 Karunanidhi entered politics at the age of 14, after being inspired by a speech made by Alagiriswami of the Justice Party in 1932. 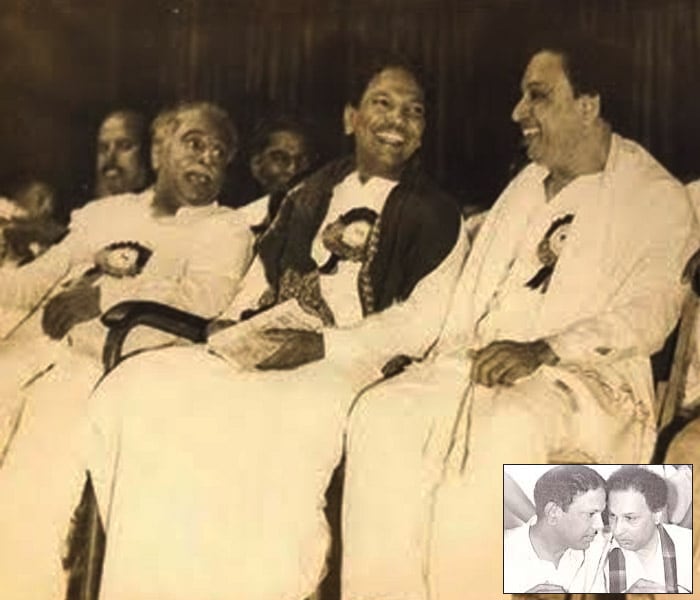 Karunanidhi was first elected to the Tamil Nadu assembly in 1957 from the Kulithalai assembly of Thiruchirapalli district.

He became the DMK treasurer in 1961 and Deputy Leader of Opposition in the state assembly in the year 1962. When the DMK came to power in 1967, he became the Minister for Public Works. 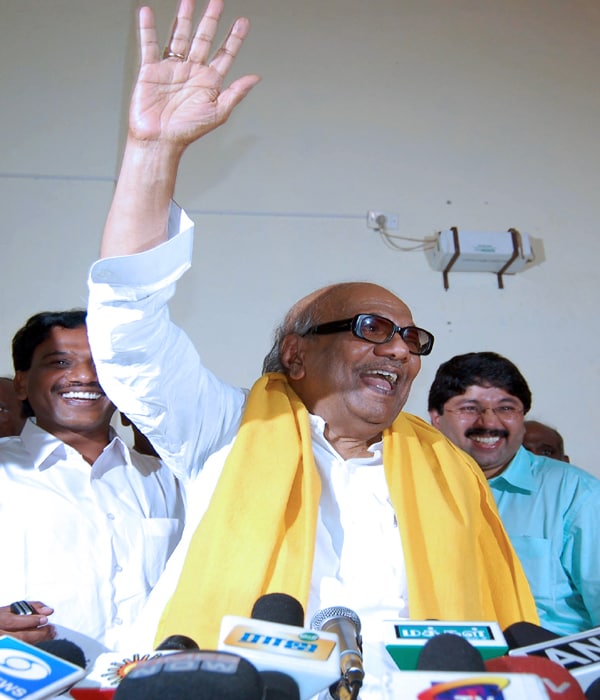 After the death of CN Annadurai in 1969, Karunanidhi became the Chief Minister of Tamil Nadu. He has held various positions in the party and government during his long career in the Tamil Nadu political arena. (AFP Photo) 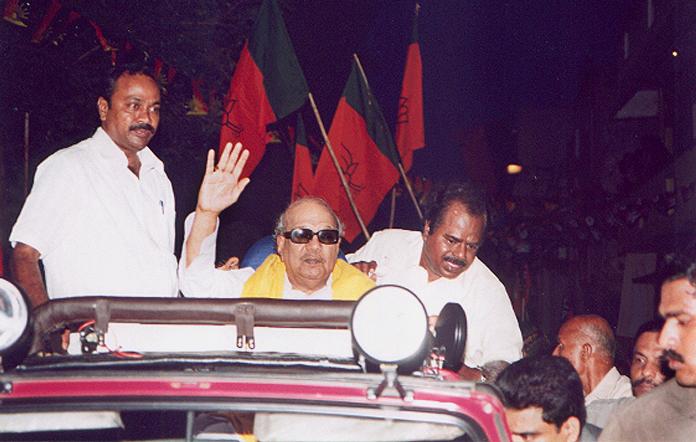 In the 1996 elections, the DMK-led-front won the election and its leader M. Karunanidhi, became the chief minister.This was his fourth term in office. (AFP Photo) 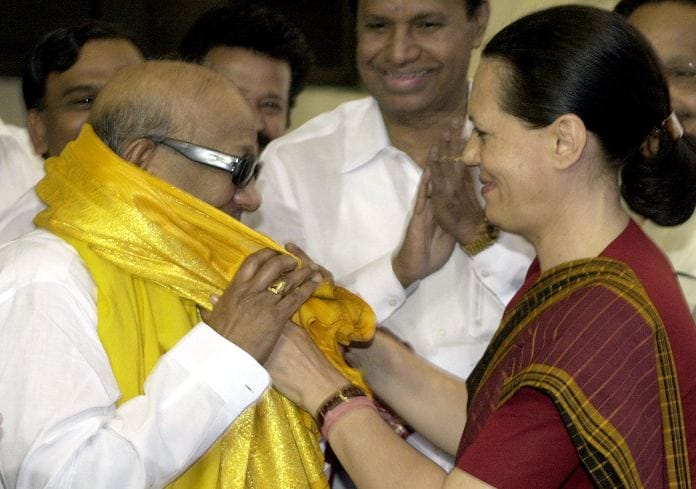 Karunanidhi went on to become the Chief Minister again in 2006. In the 2009 Lok Sabha Elections, he led the UPA in Tamil Nadu and Puducherry, to win 28 seats, even with a significantly smaller coalition. (AFP Photo) 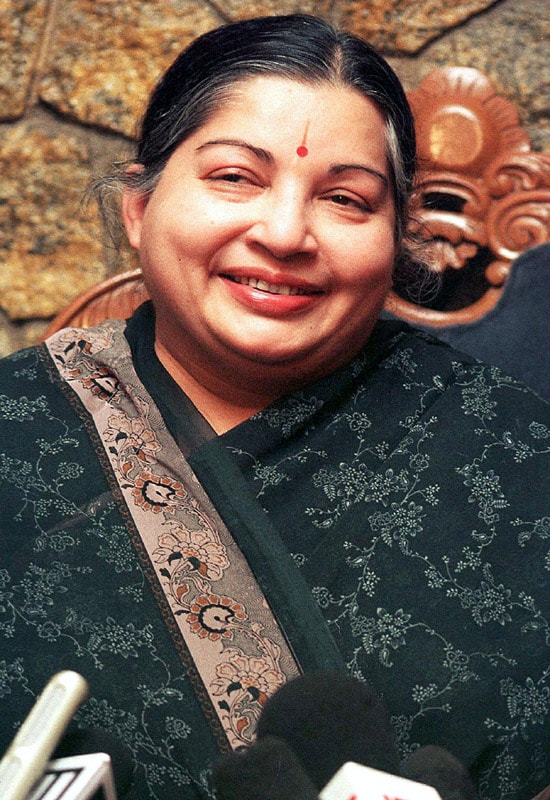 In the 1991 elections, AIADMK ousted DMK and Karunanidhi was the sole DMK candidate to have been returned after the electoral battle. He, too, resigned in disgust. (AFP Photo) 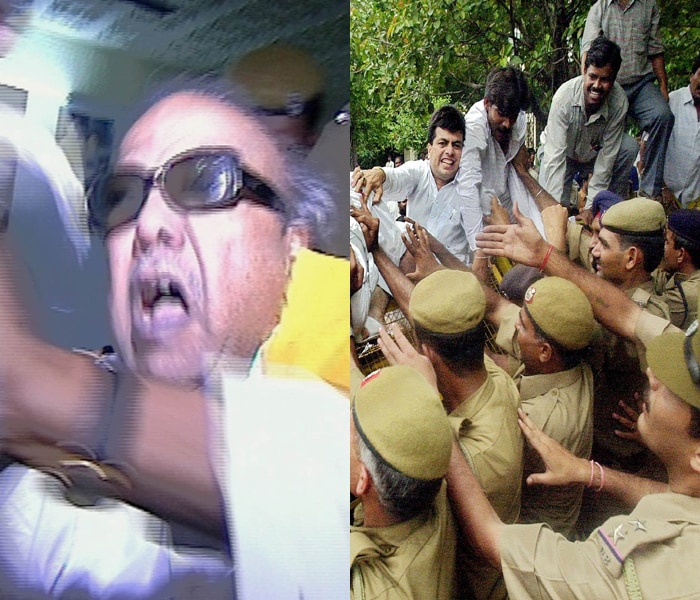 This TV grab released by Sun TV to Chennai journalists. It shows Karunanidhi (L) being dragged away by police officers from his home on June 30, 2001. Karunanidhi was arrested for alleged corruption in the construction of ten flyovers in Chennai. The arrest and its manner led to wide criticism and agitation around the nation, especially in Tamil Nadu. (AFP Photo) 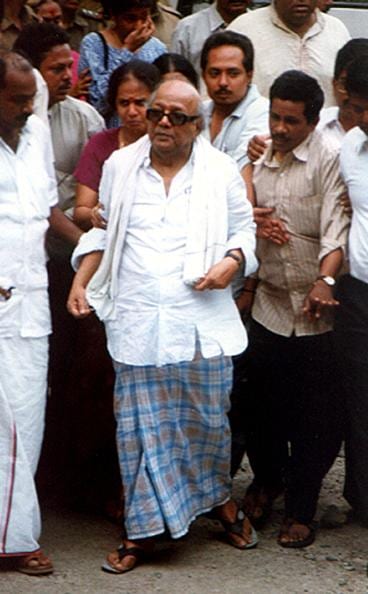 Karunanidhi followed by his supporters as he proceeds to a Madras jail after being arrested early 30 June 2001. Karunanidhi, along with scores of Dravidia Munnetra Kazagam (DMK) party officials were arrested for alleged corruption. AFP PHOTO 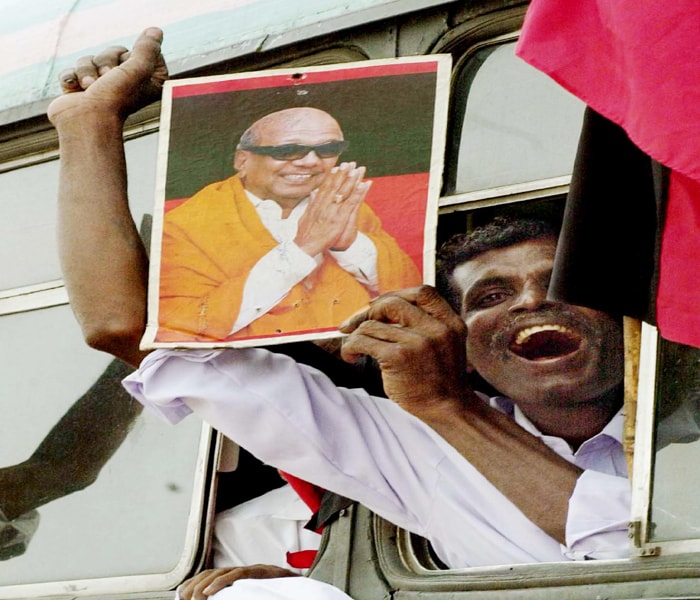 After the arrest, Karunanidhi again managed to gather the support of the people and the demand of his immediate release prevailed which consequently led to the dismissal of the Jayalalithaa government. (AFP Photo) 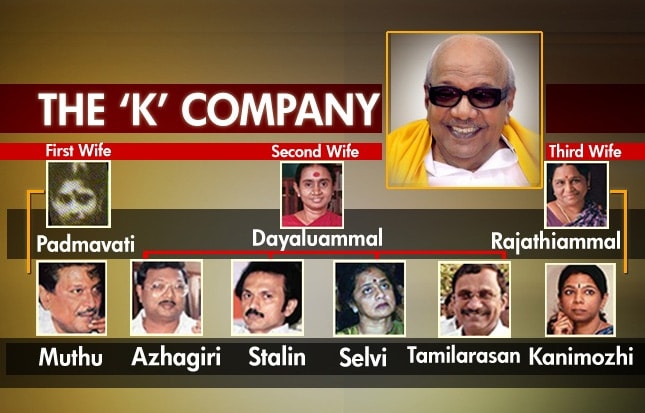 The political veteran has been married three times and has six children. Here's a look at his family tree: 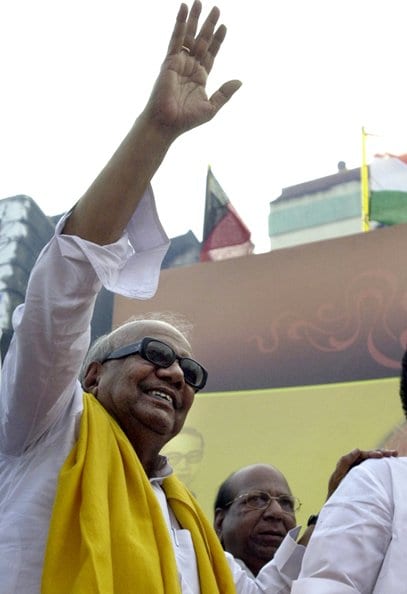 A vegetarian, Karunanidhi claims the secret of his energy and success lies in yoga and daily practice. His day begins at 4-30 a.m. with a walk at Anna Arivalayam. After that he reads the newspapers. He writes for party organ `Murasoli' and meets visitors before heading for the Secretariat. (AFP Photo) 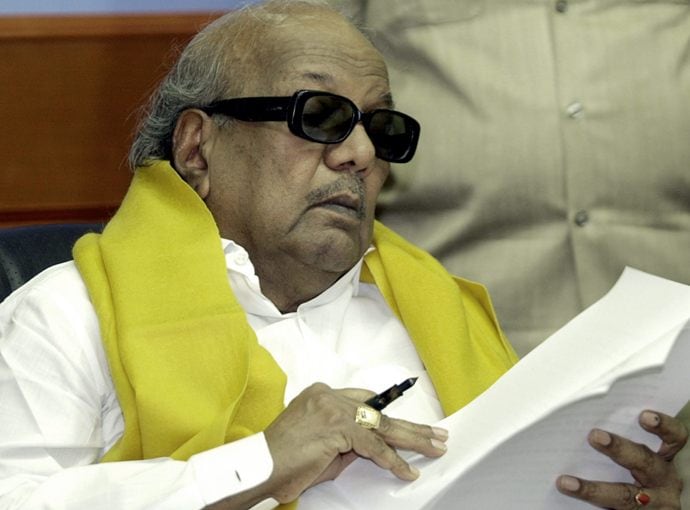 Always the prodigy, Karunanidhi plunged into cultural and the social movement at the early age of 13. His love for art forms has not diminished with advancing age. (AFP Photo) 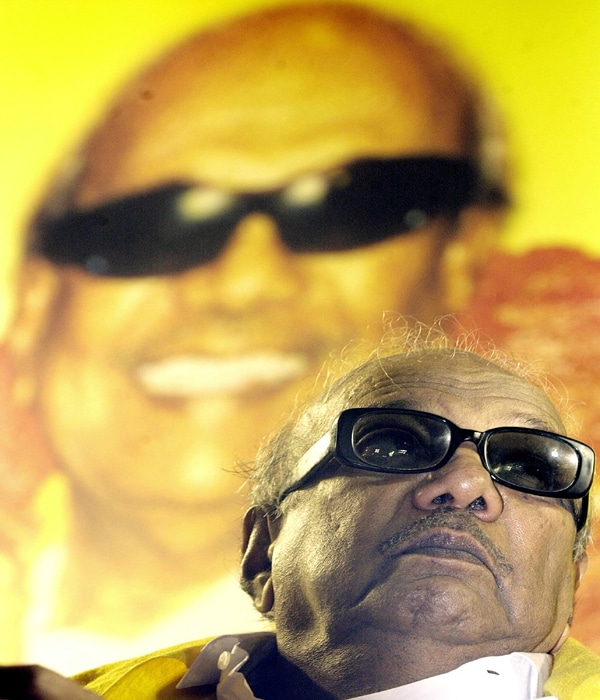 He began his career as a scriptwriter in the Tamil film industry. He was famous for writing historical and social (reformist) stories which propagated the socialist and rationalist ideals of the Dravidian movement to which he belonged. (AFP Photo) 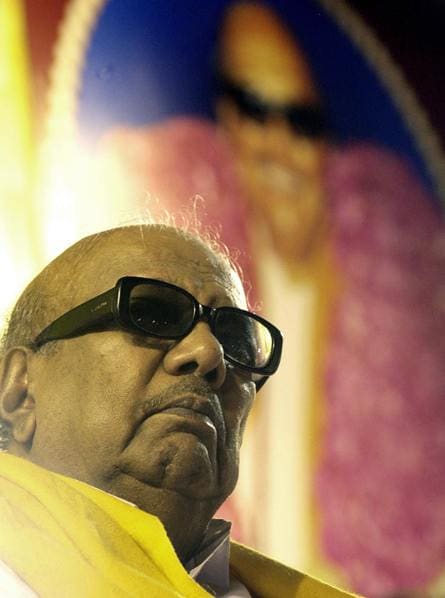 He started writing for films with Rajakumari in 1947 and the success with words has continued. (AFP Photo) 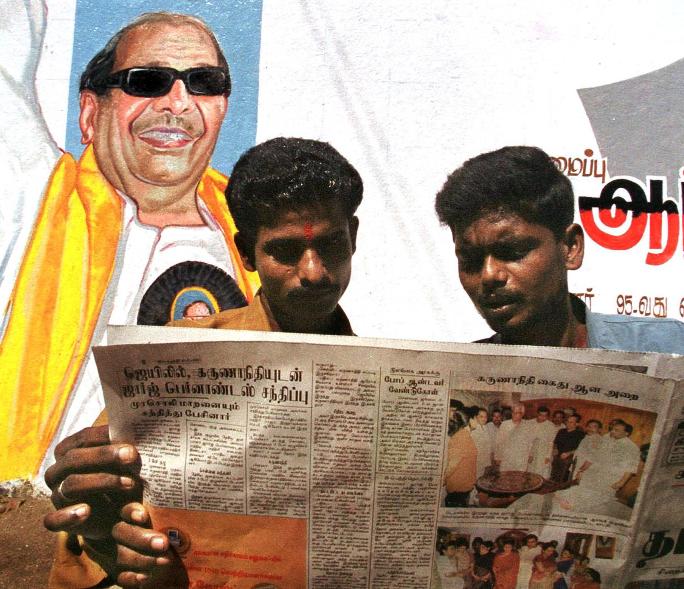 Some of his early plays like Manimagudam, Ore Ratham, Thooku Medai, Vellikizhamai, Udhayasooriyan and Silappathikaram virtually changed the way people thought. Interestingly, most his early plays were subsequently made into feature films in later years. (AFP Photo) 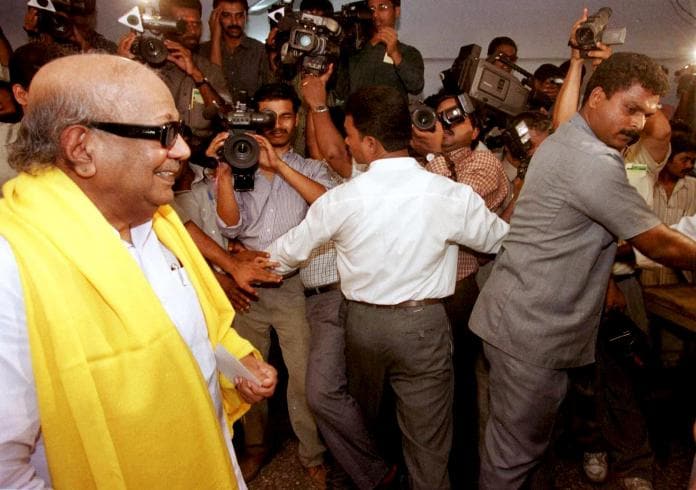 He also wrote the script and dialogues for many early MGR starrers like Abimanyu, Manthiri Kumari, Marutha Naattu Ilavarasi, Naam and Pudhumai Pithan which catapulted both the writer and the actor to stardom. (AFP Photo) 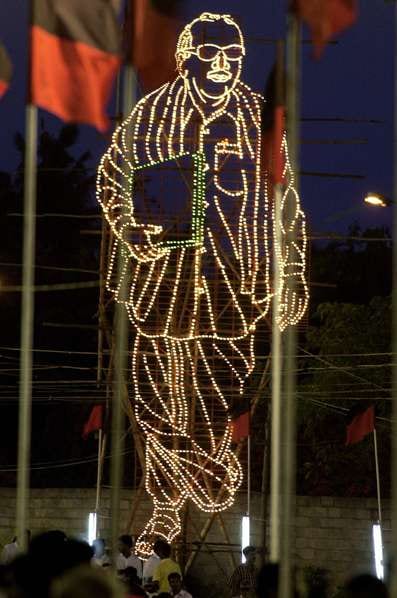 After becoming the chief minister, his involvement with films lessened. But in the eighties, Karunanidhi returned with a bang and his rule in cinema started again with the successful film Neethikku Thandanai. (AFP Photo) 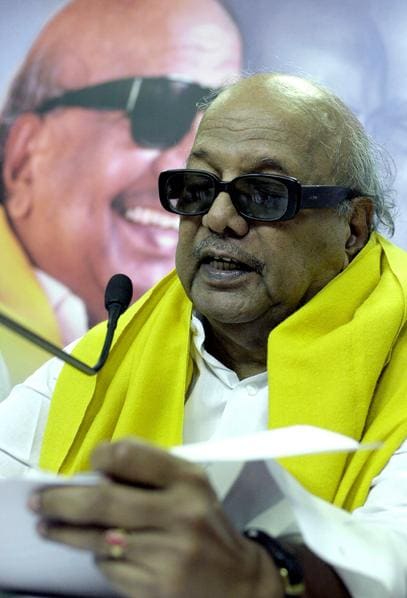 As screen writer, Karunanidhi has few parallels. His first writing for a film came in 1947 with the film Rajakumari. This film is close to his heart as it brought him and MGR together for the first time on screen. (AFP Photo) 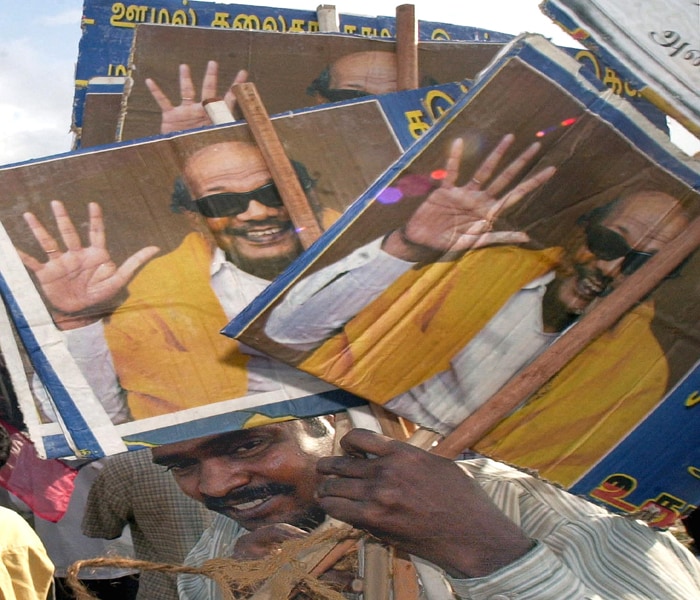 A Tamil film, Pen Singham, scripted by the DMK chief based on his old novel, was released on his birthday in 2009. (AFP Photo) 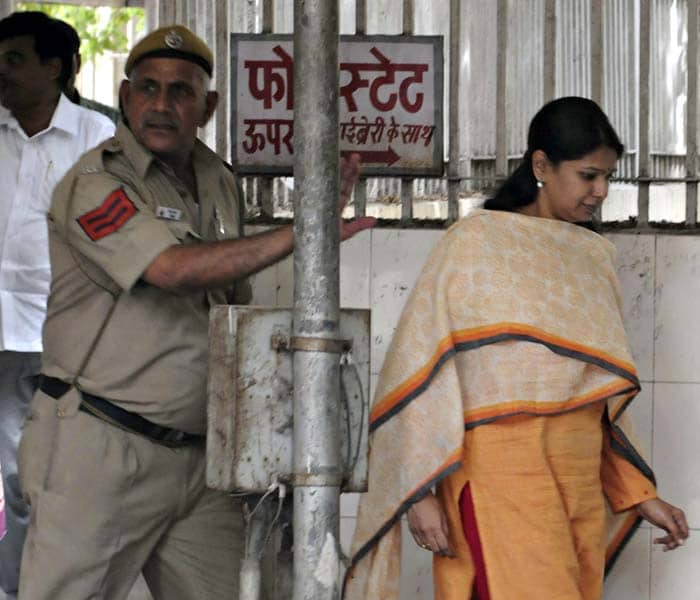 Last year, his daughter Kanimozhi was named as co-accused by the CBI for allegedly accepting a Rs 214-crore bribe that was a part of India's largest swindle, the 2G scam. She was arrested on May 20 after her bail plea was rejected by a Delhi court.

Sounding almost crestfallen after his daughter Kanimozhi's arrest, Karunanidhi had said, "I am in a position like any other father who has a daughter and was arrested for no fault of hers."

Kanimozhi is largely believed to be his favourite child. She has also been called her father's literary heir, the one that shares a love of poetry with him. 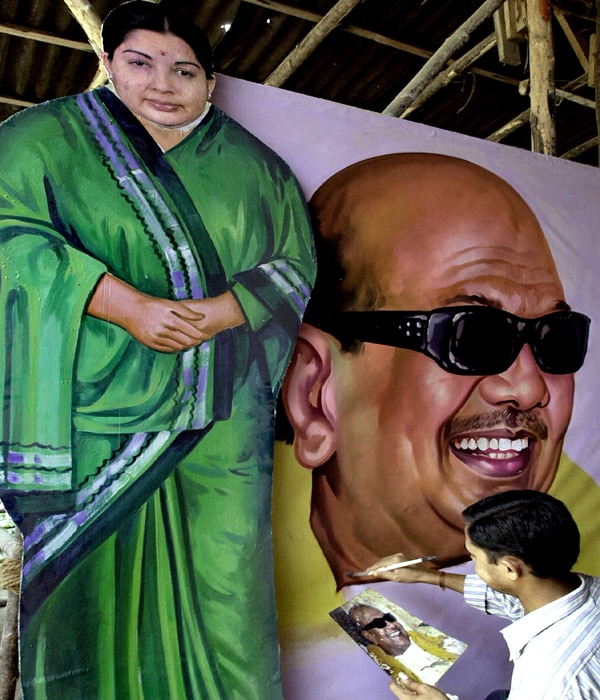 He has a habit of winning. But his party has seen both, political crests and troughs. The DMK patriarch fought 2011 Tamil Nadu Assembly elections with his back to the wall and lost eventually. Things got worse with the arrest of his daughter Kanimozhi in connection with the 2G scam. His biggest political rival for years, J Jayalalithaa and her party, the AIADMK, did not miss the opportunity that the 2G scandal presented. It was an election fought barb by political barb and when the verdict came out, Karunanidhi knew he had fallen from grace. 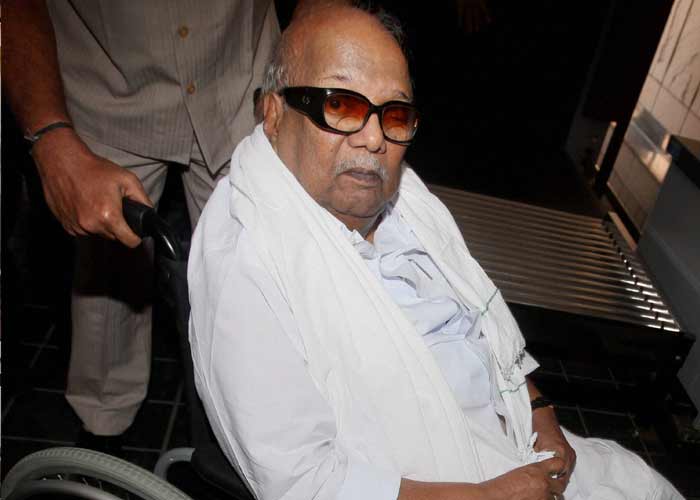 The DMK chief has won every election that he has fought in his political career spanning over 60 years. He has been Chief Minister of Tamil Nadu five times. He led the UPA in Tamil Nadu and Puducherry to win all 40 Lok Sabha seats in the 2004 Lok Sabha elections.

So, one cannot negotiate the fact that despite all the setbacks, Karunanidhi continues to remain one of Tamil Nadu's tallest leaders.