Year in photographs of the Obamas in 2012 by Pete Souza 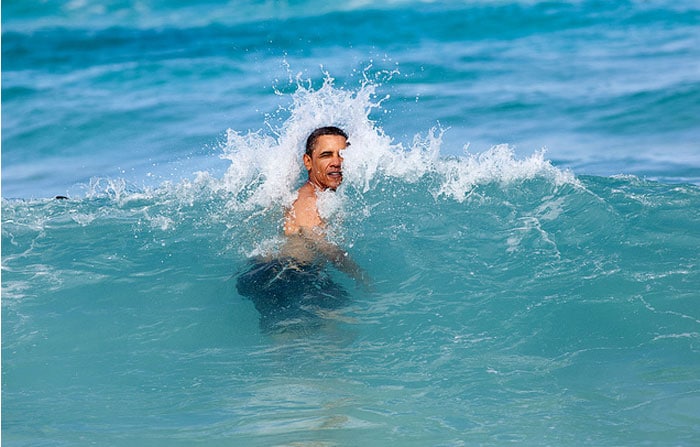 "A nice way to celebrate the New Year for the President was to jump in the ocean in his native state of Hawaii. He was on his annual Christmas vacation with family and friends, and went swimming at Pyramid Rock Beach in Kaneohe Bay." 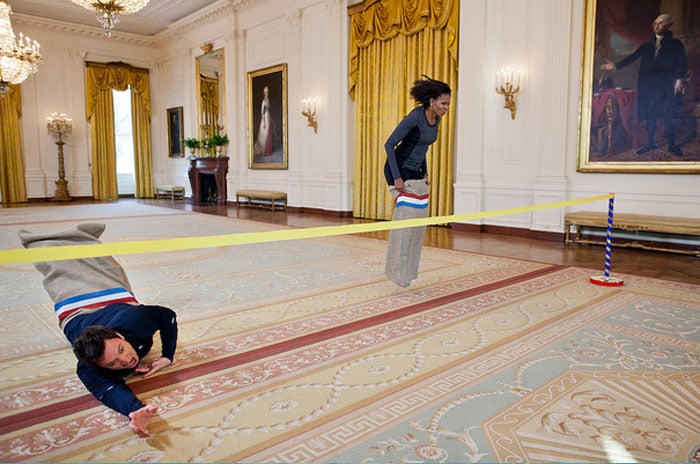 "Chuck Kennedy made this amusing photograph of First Lady Michelle Obama participating in a potato sack race with Jimmy Fallon in the East Room of the White House during a “Late Night with Jimmy Fallon” taping for the second anniversary of the "Let's Move!" initiative." 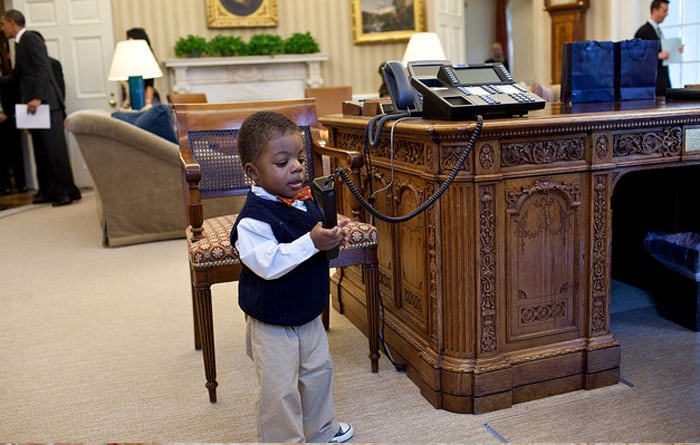 "Kids will be kids. After the President had welcomed Lauren Fleming, the March of Dimes national ambassador, and her family in the Oval Office, her brother, Corbin Fleming, started to play with the President's telephone. Fortunately, he wasn't able to get through to a head of state." "Egged on by B.B. King, at right, the President joins in singing 'Sweet Home Chicago' during the 'In Performance at the White House: Red, White and Blues' concert in the East Room. Participants include, from left: Troy 'Trombone Shorty' Andrews, Jeff Beck, Derek Trucks, B.B. King, and Gary Clark, Jr."

"We were doing an event at the Henry Ford Museum in Dearborn, Mich. Before speaking, the President was looking at some of the automobiles and exhibits adjacent to the event, and before I knew what was happening he walked onto the famed Rosa Parks bus. He sat in one of the seats, looking out the window for only a few seconds." 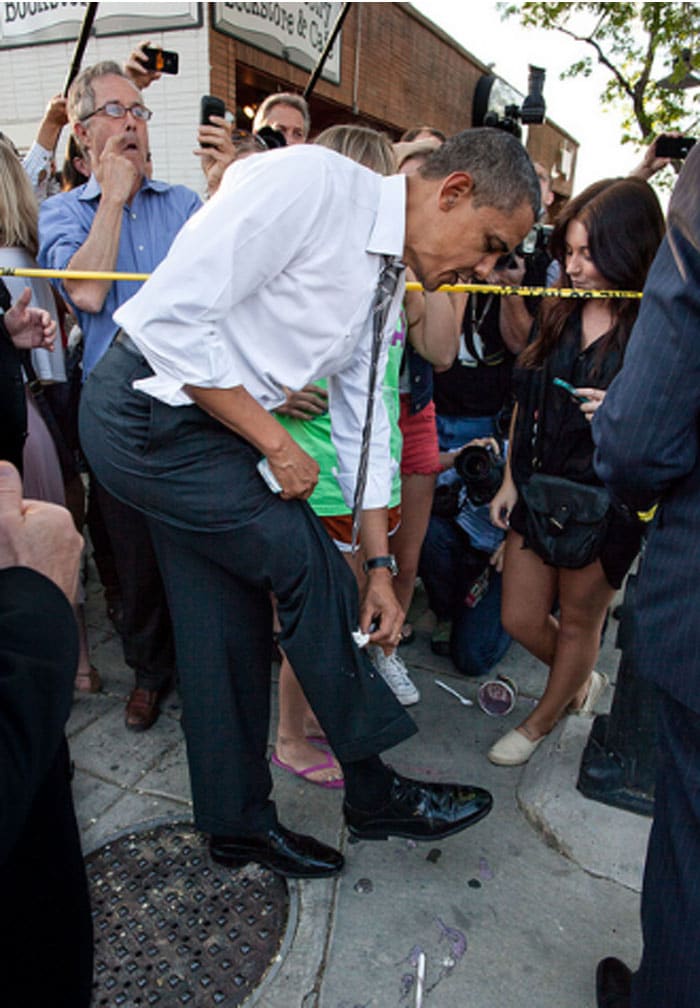 "The President wipes off his trousers after being splattered by frozen yogurt while shaking hands along a ropeline in Boulder, Colo. University of Colorado student Kolbi Zerbest had placed her cup of yogurt on the ground while trying to shake hands with the President, and someone else inadvertently kicked the cup."

"After some early morning basketball in Los Angeles, the President talks with the players who included actors Don Cheadle, Tobey Maguire, and George Clooney, along with two of Clooney's long-time friends. Stacy Keibler is also at right." 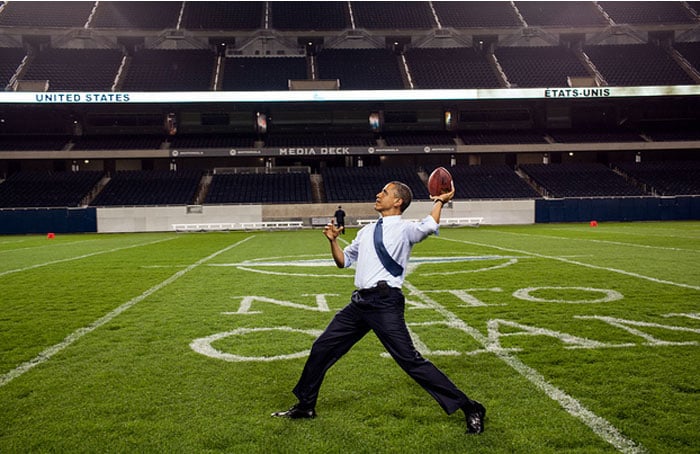 "'How cool is this,' the President said after he threw a football at Soldier Field following the NATO working dinner in Chicago. I think he was especially excited to be on the home turf of his beloved Chicago Bears." 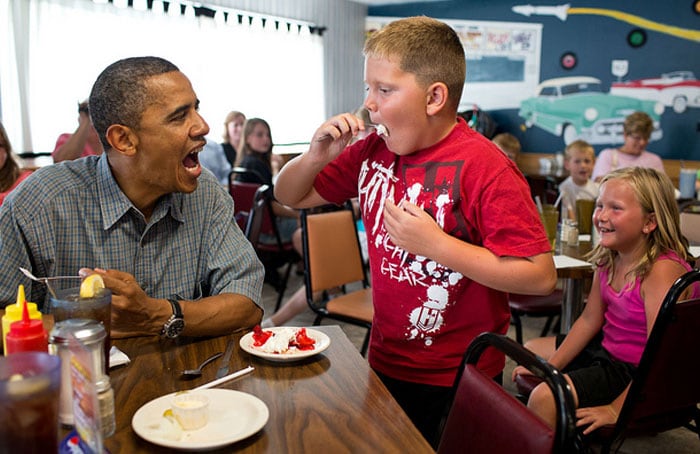 "'Anyone want to try a piece of my strawberry pie,' the President asked those at adjacent tables during a stop for lunch at Kozy Corners restaurant in Oak Harbor, Ohio. A young boy said yes and came over for a big bite of pie." 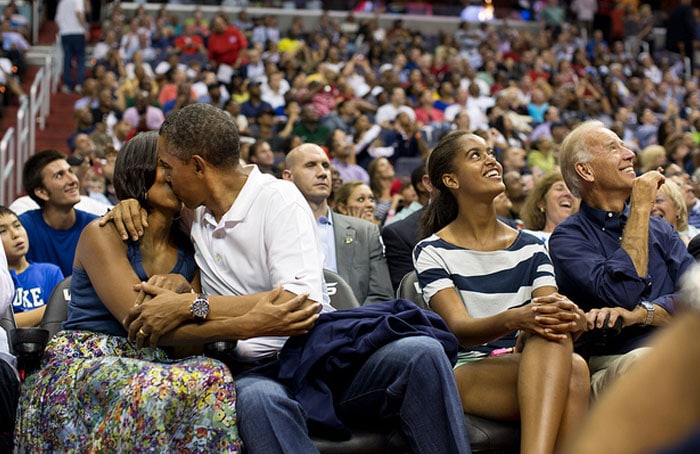 "The President and First Lady were attending the game between the U.S. Men's Olympic basketball team and Brazil in Washington, D.C. During the first half, the jumbotron flashed couples on their 'Kiss Cam', where they are then induced by the crowd to kiss each other. But neither the President or First Lady saw themselves when they were flashed on the 'Kiss Cam', and some in the audience booed when they didn't kiss. At halftime, as we walked to the locker room to visit the U.S. team, daughters Malia and Sasha were asking their parents why they hadn't kissed during their 'Kiss Cam' moment. Both the President and First Lady said they hadn't even realized what had happened and didn't know why people were booing. So in the second half, when they appeared again on the 'Kiss Cam', the President leaned over to kiss the First Lady amidst audience cheers as Malia and the Vice President watched overhead on the jumbotron." 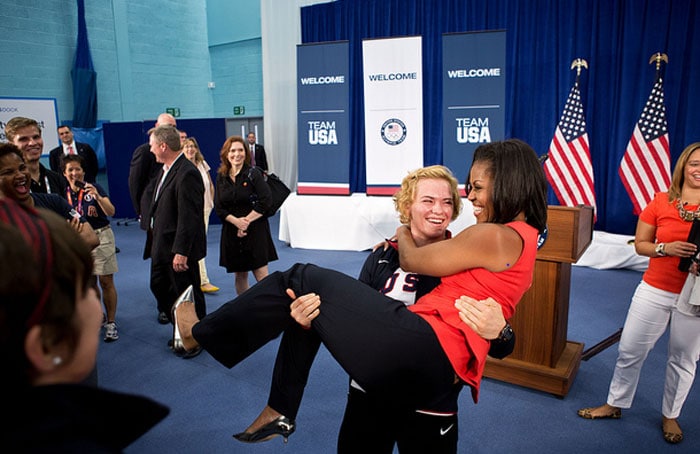 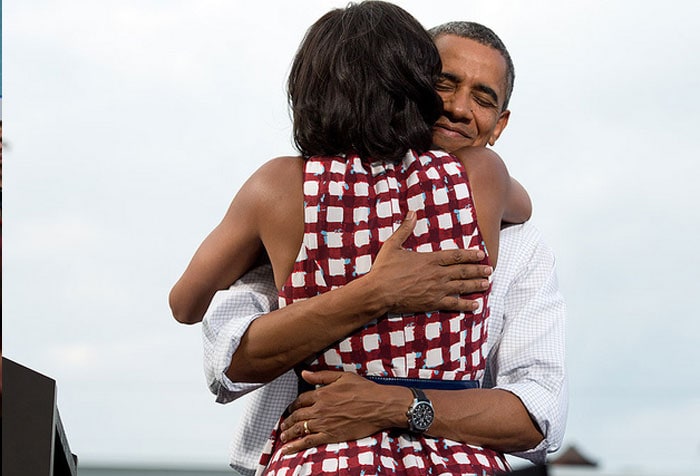 "The President hugs the First Lady after she had introduced him at a campaign event in Davenport, Iowa. The campaign tweeted a similar photo from the campaign photographer on election night and a lot of people thought it was taken on election day." 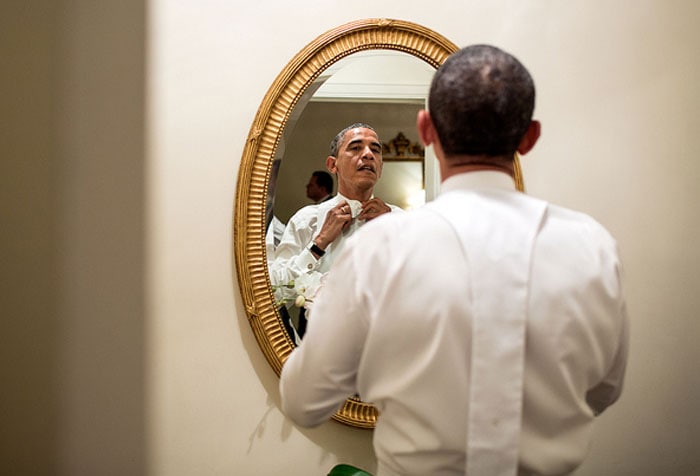 "The President ties his white tie before the Alfred E. Smith dinner in New York. Although the dinner is an annual event, every four years, the two presidential nominees attend the dinner only a few weeks before the election." 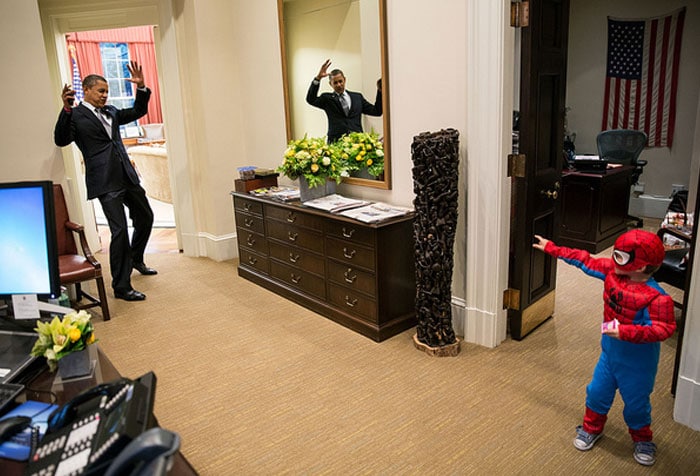 "The President pretends to be caught in Spider-Man's web as he greets the Nicholas Tamarin, 3, just outside the Oval Office. Spider-Man had been trick-or-treating for an early Halloween with his father, White House aide Nate Tamarin in the Eisenhower Executive Office Building. I can never commit to calling any picture my favorite, but the President told me that this was HIS favorite picture of the year when he saw it hanging in the West Wing a couple of weeks later." 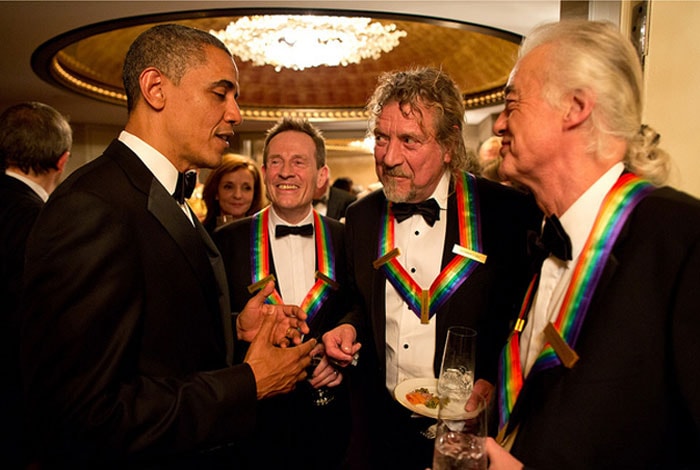 "When I was in high school, I had a friend who had Bose 901 speakers–at the time the best speakers on the planet–and when his parents were gone, he would invite me and other friends over to blast Led Zeppelin songs so loud that the windows in the house almost rattled. So when the President was chatting with the surviving members of Led Zeppelin–John Paul Jones, Robert Plant and Jimmy Page–during intermission at the Kennedy Center Honors, those long ago memories came flooding back."