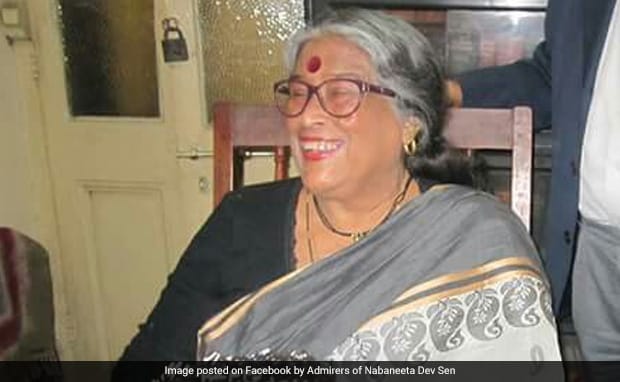 Prominent Bengali author, poet, academic Nabaneeta Dev Sen died at her Kolkata home Thursday evening. She was 81 and is survived by two daughters. She had been unwell for some time before her death. Nabaneeta Dev Sen was the former wife of Nobel laureate Amartya Sen who has expressed deep shock at her passing.

Saddened at the passing away of noted litterateur and academic Nabaneeta Dev Sen. A recipient of several awards, her absence will be felt by her myriad students and well-wishers. My condolences to her family and admirers.

Prominent personalities in Kolkata and beyond have lamented her demise. One of her last visitors in October was Nobel-winning economist Abhijit Vinayak Banerjee. They were family friends.

Deeply saddened to hear the demise of Sahitya Academy Awardee Smt. Nabaneeta Dev Sen. A versatile writer & poet, also a family friend, her passing away is a big loss to the world of literature. My heartfelt condolences to her two daughters & family members. Om Shanti🙏 pic.twitter.com/rocC4TM7av

"Saddened to hear of the passing of Nabaneeta Deb Sen. She was a woman of incredible warmth and generosity, a dear friend and a wonderful writer. I will miss her greatly," author Amitav Ghosh tweeted.

Her contribution in academics and literature will be remembered for ever.
Have been quite fortunate to see her very closely. #IMissYoupic.twitter.com/YNLe8iTsLR

The family of the author has requested privacy tonight.

Daughter of poets Narendra Dev and Radharani Devi, Nabaneeta Dev Sen was Born January 13, 1938. She studied at Presidency College, Jadavpur University, Harvard and then Berkley. She returned to teach comparative literature at Jadavpur University. She had 80 published books including novels, poetry, essays, travelogues and stories for children. She got the Padma Shri in year 2000, a year after receiving the Sahitya Akademi Award.

The author was a prominent commentator on the political and social situation in the country, certainly in Bengal. Alongside political commentary she wrote the most wondrous fairy tales for children. Some of her best known books included a series called Balobashar Baranda or Beloved Balcony. Her home where her celebrated parents once lived and is now a heritage property is called Bhalo Basha or Love.