Brig Chandpuri lived up to the reputation of the Regiment when he led his men to hold back the advancing Pakistanis and finally decimate them with support from the Indian Air Force. 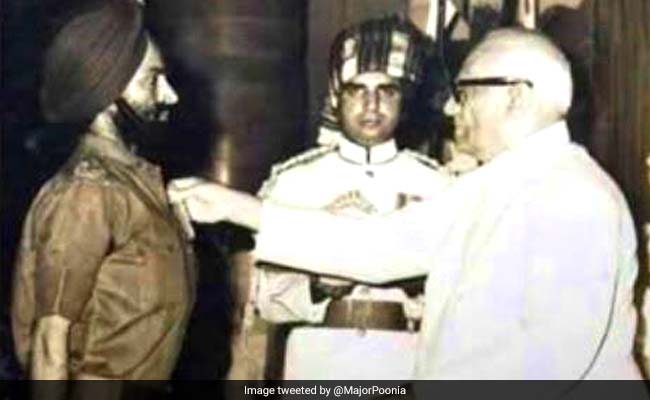 Famously known for the heroics and volour that he and his men displayed on the night of December 5, 1971 during the battle of Longewala (Laungewala) to stop the onslaught by tanks of a determined Pakistani Army, Brigadier Kuldip Singh Chandpuri was always a fighter - be it for Chandigarh's civic issues or his last battle against cancer.

When he died on the morning of November 17, just five days before he would have celebrated his 78th birthday, Brig Chandpuri did not let go his fighting spirit even in hospital. He is survived by his wife and three sons.

A Major during the 1971 India-Pakistan war, he had held his post through the night in the famous battle of Longewala in Rajasthan with just 120 men against a full-fledged attack by advancing Pakistani Patton tanks and over 2,000 soldiers.

He was decorated with the Maha Vir Chakra (MVC) for the heroic stand-off that forced the enemy to retreat.

The MVC citation read: "Major Kuldip Singh Chandpuri was commanding a company of the Punjab Regiment occupying a defended locality in the Rajasthan Sector. On the 5th December 1971, in the early hours of the morning the enemy launched a massive attack on this locality with infantry and tanks. Major Chandpuri exhibited dynamic leadership in holding his command intact and steadfast."

"Showing exceptional courage and determination, he inspired his men moving from bunker to bunker, encouraging them in beating back the enemy till reinforcements arrived. In this heroic defence, he inflicted heavy casualties on the enemy and forced them to retreat leaving behind twelve tanks.

"In this action, Major Kuldip Singh Chandpuri displayed conspicuous gallantry, inspiring leadership and exceptional devotion to duty in keeping with the highest traditions of the Indian Army," the citation said.

A soft-spoken but firm man, Brig Chandpuri settled in his corner house in Chandigarh's Sector 33 after retiring from the Indian Army, remaining active socially.

The famous photograph of his soldiers dancing atop vanquished Pakistani tanks after the battle of Longewala was won, adorned the wall in a big frame in the living room of his house.

The feat of Brig Chandpuri and his men later became celluloid history through the JP Dutta-directed Bollywood blockbuster "Border" which was released in 1997. His action-packed role was played by actor Sunny Deol.

The decorated war veteran, who took the Chandpuri surname from his native village Chandpur in Balachaur sub-division of Punjab, was born on November 22, 1940 in Montogomery (now in Pakistan) in undivided India.

Commissioned into the Indian Army in 1963 after completing his training course at the Officers' Training Academy-Madras (now Chennai), Brig Chandpuri was assigned to the 23rd battalion of the Punjab Regiment.

Brig Chandpuri lived up to the reputation of the Regiment when he led his men to hold back the advancing Pakistanis and finally decimate them with support from the Indian Air Force (IAF). Twenty-two Pakistani tanks were destroyed in the Battle of Longewala.

He saw action in the 1965 India-Pakistan war in the Western sector, served in the United Nations Emergency Force (UNEF) in Gaza (Egypt) and was twice an instructor at the prestigious Infantry School, Mhow (Madhya Pradesh), imparting combat training.

Brig Chandpuri was nominated as a Councillor in the Chandigarh Municipal Corporation, where he served actively (2006-2011), raising issues of civic amenities, sports and other local matters.

Chandigarh, and Punjab, have lost a great fighter.